30 organizations and groups found (New collection descriptions are constantly being added)
Items per page:       «« previous page 1 2 3 4 5 6 next page »»
National Pantheon Foundation
The National Pantheon Foundation was established in 1991 by the Municipal Association for the Protection of Budapest, the Funeral Institute of Budapest, and Mrs. Ferenc Tóth and Mária Kovács. The Foundation's purpose is to tend to Hungarian national memorial sites and to identify and protect graves and memorial sites all over the world that are of importance to Hungarian history, culture, and art.
read more

The National Library was founded in 1802 as a private foundation by Count Ferenc Széchényi, a Hungarian aristocrat. The Library remains the foremost cultural and educational collection in Hungary. In 1879, the government nationalized the institution.

The National Library was a highlight of Hungarian high culture during the communist period. It operated as a centralized, state-owned institution, independently from the National Museum, its pre-1949 partner organization. As a public institution, it collected all Hungaricana (publications printed anywhere in the world and relevant to the Hungarian language or Hungarian culture), and it was an important centre, providing important services for scholars and students with its vast collections of printed and manuscript materials. The Library played a crucial role in shaping printed collections nationwide: it distributed professional literature and fiction to regional libraries. In fact, the National Library which was newly founded after 1949, helped create several regional libraries.

The National Library produced one of the most important dissent collections during the socialist period, although not intentionally. As the keeper of closed circuit publications (in addition political literature, it also contained pornography), the Library performed censorship under the dictatorship. Nonetheless, the systematic collection of critical, alternative and countercultural products created a unique assemblage of such items for post-communist Hungary.
read more
National University of Public Service
The National University of Public Administration was established in 2012 with the merger of the Miklós Zrínyi University of National Defense, the Academy of Police Officers, and the Faculty of Public Administration of the Corvinus University of Budapest, and it considers the Royal Hungarian Ludovica Defense Academy as its antecedent. The profile of the university focuses on the various activities of the state and its functions and services. The university provides education for the future and present personnel of public administration, law enforcement, national defense, and security services, and its task now includes the training of hydrographical professionals.
read more 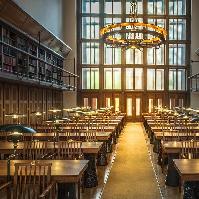 National and University Library in Ljubljana

The beginning of the library is tied to the decision by Empress Maria Theresa of 1774, whereby 637 books, which had been salvaged after the fire at the Jesuit college in Ljubljana, were to be used in a library that was established by the Ljubljana lyceum. Under French administration, this lyceum library had the right to collect all the printed matter and editions in the territory of Carniola, and later in all of the Illyrian provinces. The library experienced particular growth under the management Matija Čop in the 1830s. Following the closure of the Ljubljana lyceum, the library grew into the provincial research library of Carniola (interview with Janežič, Helena).

After the First World War, in 1919, it was renamed the State Library, and it became the central library for all of Slovenia. Two years later, in 1921, it became the official State Library, which began collecting literature and publications from the entire territory of the then Yugoslav state. Based on the law governing universities, the library was named the University Library in Ljubljana in 1938, as in the interwar period it was also a university centre in Ljubljana. The design for the new university library building was made by Jože Plečnik at the very beginning of the 1930s. The library was completed in 1941. In 1944 it was bombed, and after the war library was restored. First, after 1945, the Slovene National Library was given its current name the, the National and University Library. The library did not take part in opposition activities, but rather represented, in a formal sense, the institution of the socialist regime in Slovenia and Yugoslavia. This is best demonstrated by the D-fund. around which the library was engaged in the sense of prohibiting anti-communist and non-communist literature (interview with Janežič, Helena). 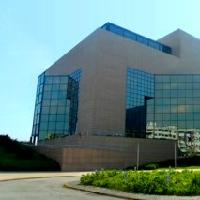 National and University Library in Zagreb

It was originally located in an abandoned Dominican monastery in today’s Trg Svete Katerine 5, and later in the building of the current Rector’s Office, located at today's Croatian State Archives, and since 1995 has been located in an impressive and newly constructed building in a street called Ulica Hrvatske bratske zajednice.

Its primary function is to store Croatian cultural property in written, printed, and modern digital form. This task was carried out in its entirety even during the period of socialism which is particularly evident in the fact that the so-called unsuitable books were also kept. During that period, the institution itself had no opposition role; it was the official, central Croatian library. However, there did exist opposition activity amongst some of its employees, for example, Branko Hanž who stored away the unsuitable books.