Donation of the Nova Hrvatska Archives to the National and University Library in Zagreb, 1994 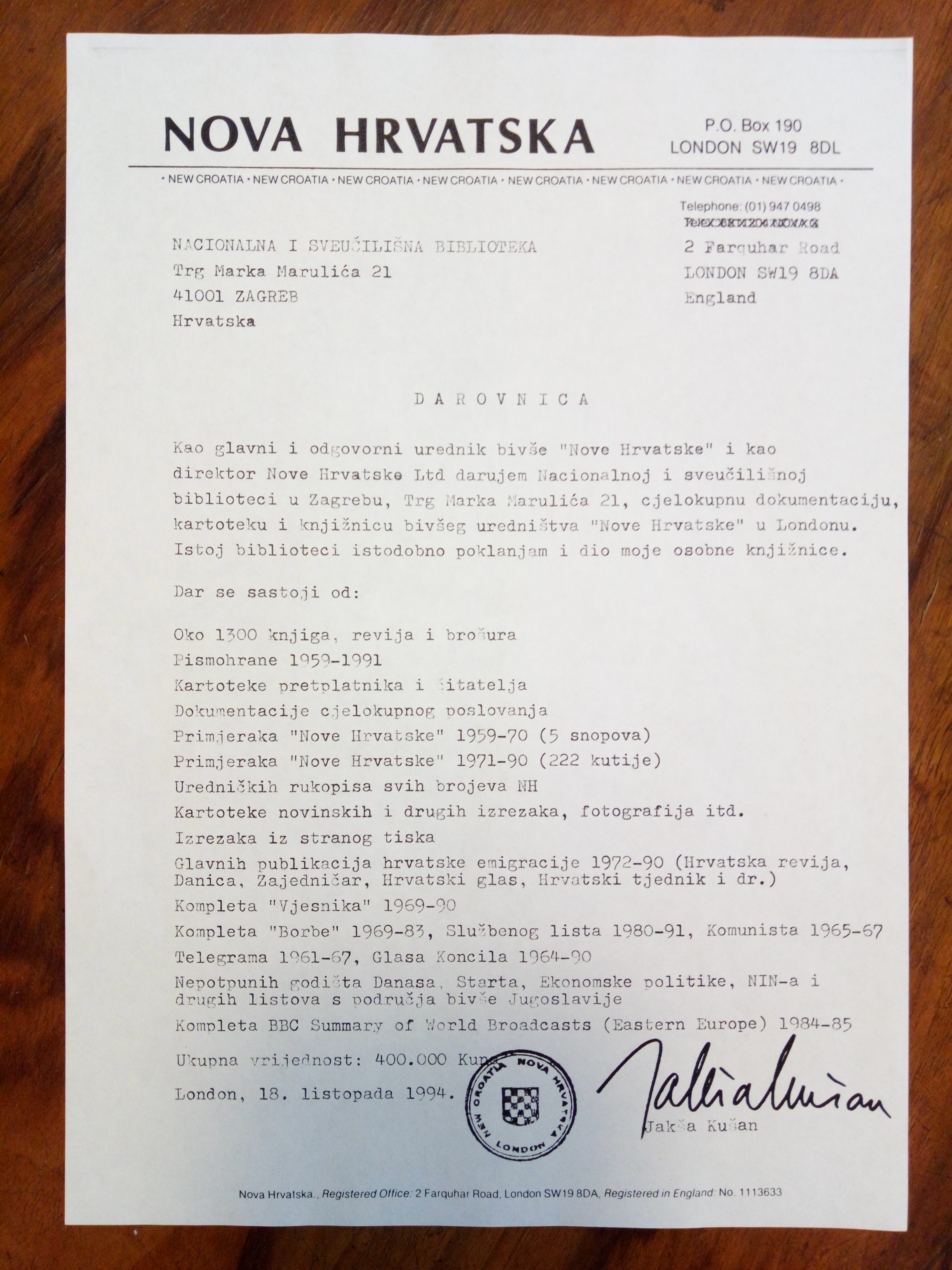 Jakša Kušan, a Croatian journalist and writer who lived and worked in exile since 1955, and who was the editor-in-chief of Nova Hrvatska, decided to return to his homeland after the fall of communism in Croatia. As Nova Hrvatska ceased publication in 1990, he decided to transfer the magazine’s archive and his personal archive to Croatia Both testify to the persistent journalistic struggle to inform the Western public about the untenable situation in Croatia and Yugoslavia under socialism. Because this involved a considerable amount of material, he decided to donate it to the National and University Library in Zagreb (NSK), which had already shown great interest. On October 18, 1994, Kušan gave all documentation, files and the library of the Nova Hrvatska editorial office, which was housed in London, and at the same time, he donated a part of his papers.

Kušan donated around 1,300 books, magazines and brochures related to the period 1952-1991, the Nova Hrvatska newspaper archive and its business documentation. In addition to all the copies of Nova Hrvatska, which were kept in 5 bundles and 222 boxes, he also donated editorial manuscripts of all issues. There are also newspapers and other press clippings from the foreign press. A complete collection of the most significant publications of Croatian émigrés issued from 1972 to 1990 (Hrvatska revija, Danica, Zajedničar, Hrvatski glas, Hrvatski tjednik, etc.), a collection of Vjesnik (1990-1996), Borba (1969-1963), Službeni list SFRY (1980-1991), Komunist (1965-1967), Telegram (1961-1967), and Glas Koncila (1964-1990) were also donated. There are also incomplete collections of newsmagazines like Danas, Start, Ekonomska politika, and NIN. The donation also contained the BBC Summary of World Broadcasts (Eastern Europe) from 1984 and 1985. The total value of the donation is estimated at approximately HRK 400,000 (ca. €60,000).

The NSK had sent two large trucks belonging to the Varteks textile company which were returning from England. A problem occurred when they were loading the material into the NSK building. During the unloading, a storm rolled in, which destroyed a significant part of the collection.

Part of Kušan's personal collection, which he kept at his London apartment, was also given to the NSK, while a part remained with him and is still in his possession in his apartment in Zagreb today. Thus, two collections were made – the Nova Hrvatska Collection in the NSK and the Jakša Kušan Personal Papers. Kušan promised to donate his private collection (containing books, photographs, brochures and private correspondence since the mid-1950s) to the Franciscan gymnasium in Visoko (Bosnia-Herzegovina).