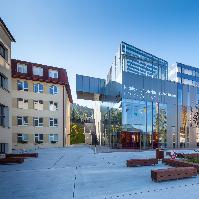 
It was after the Velvet Revolution in the year 1989 that possibilities arose for the creation of CU in Slovakia. The Slovak bishops endeavoured to form a Faculty of Pedagogy which would educate Catholic teachers. The charter of the Pedagogical Institute of St. Andrew in Ružomberok was signed on 29 June 1995, in Dolná Krupá, and the first director was prof. RNDr. Jozef Ďurček, CSc.

The Academic Council of the University of Trnava created a Catechetical-pedagogical Faculty of St. Andrew (KPF) in 1996, through the transformation of the Pedagogical Institute of St. Andrew. The KPF was incorporated into the University of Žilina in 1997. Its statute, with the right of Church audit, as is usual for theological faculties, was registered at the Ministry of Education of the Slovak Republic. The first deans of KPF were prof. RNDr. Jozef Ďurček, Csc. (1996-1998) and prof. RNDr. Pavol Kluvánek, CSc. (1999-2000).

read more
Center for Artists' Publications / Weserburg
Established in 1999 within the Weserburg Museum of Modern Art in Bremen, the Studienzentrum für Künstlerpublikationen (Research Centre for Artists’ Publications) is today one of the most significant institutions worldwide in the field of artists’ publications, with holdings exceeding 200,000 items.

The Research Centre traces its roots to the Archive for Small Press & Communication (ASPC), founded in 1974 by Anne Marsily and Guy Schraenen, and it incorporates more than 40 individual archives and special collections, including the PLG Friesländer’s Mail Art Archive, the Klaus Groh Collection, the Kunstradio Archive, and the Soft Geometry Archives.

The Research Centre’s fundamental task is to collect, develop, and explore artists’ publications since the 1950s. The mediation of the substantial works in the collections and archives also plays a significant role. The medial diversity of the artistic publications is brought to a wide audience through exhibitions, publications, and events.

Every year, about five to ten exhibitions on specific artists or certain topics offer insights into the various assets. In addition to the archives, collections, exhibitions, and events, research is the third working sphere of the Research Centre.
read more 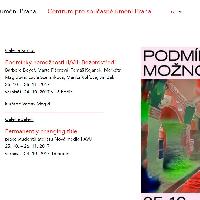 The Center for Contemporary Art was created by transformation from the original Soros Center for Contemporary Art Prague (SCSU Prague), which was founded in 1992. The Center was founded by the Foundation for Contemporary Art. During the ten years it was financially supported by George Soros, the Center created a large library of five exhibitions (three of which feature the Center on their site as pilot in their fields, namely the Orbis fictus (1996) - the first Czech exhibition (1997/8) and New Engagement (2002). Since 1997 the Center has organized 160 exhibitions of work by young artists, mainly in the Regional Hall and Galerie Jelení Gallery, and the Center also tries to provide foreign visits for artists. In 1994 it was one of the founding members of the Res Artis Residential Resident Center. As part of the ArtsLink project, Czech artists and curators were sent to internships to the United States. So far, the Center has awarded scholarships to about two hundred foreign artists in the Czech Republic. Since 1995 it has been able to send dozens of Czech artists abroad, mostly due to the Financial Trust for Mutual Understanding.

In 1997, the Center opened three studios on Jelení Street in Prague and from 1998 to 2002 rented Čimelice Chateau for exhibition purposes.

The Centre started its activity on 11th May 1993. The impetus for establishment was driven by the actions of the students from the Department of Humanities and European Studies, who visited the USA in 1992, and met Czechoslovak compatriots and exiles there. In 1993, a research and documentation centre for the study of Czech-Slovak exile was established. The centre has a scientific enquiry function, which it performs through research projects, grants and support for citizens. The centre cooperates with other professional institutions, including national organisations, associations, as well as with scientific institutions, and individuals.

After its establishment, the centre had several goals that it tried to fulfil. The first was systematically processing the history of Czechs and Slovaks who emigrated from Czechoslovakia, with an emphasis put on emigrants after 1948. Since 1995, the centre has been involved in solving several grant projects: the Czechoslovak exile policy after 1948, the Czech expatriate community abroad together with the Institute of Ethnography and Folklore from the Academy of Sciences in the Czech Republic, Czechoslovak Exile in 1948 - 1989, research on emigration from Czech lands in the Modern Age, and others.

The archive of the centre was temporarily moved between 2016 and 2018 due to the reconstruction of the building, and in 2018 it was moved back to the History Department at Olomouc University, and a large inventory of archived records was planned.

Center for Research of the Liberation Movement in Ukraine

The Center for Research of the Liberation Movement in Ukraine is an independent, not-for-profit scholarly nongovernmental organization that studies various aspects of Ukraine's struggle for liberation in the 20th Century. The organization is also engaged actively in Ukraine's present day memory politics, in particular, the legacies of totalitarianism in the former USSR and Central and Eastern Europe.