The artist group of Orfeo criticized the communist system by following the ideas of the student movement of 1968 and the new left ideological trends. Orfeo was attacked by the political leadership as an uncontrollable, hostile group which was opposed to the communist system and the allegedly legitimate societal forms.

Orfeo was based on a puppet theatre group, which first performed in 1969 and to which a theatre company, a music band, and a circle of fine artists and photographers joined. The main common point in these young people’s lives was that creative intention merged with very strong leftist radical criticism of the regime based on Marxist ideas. Their artistic ambition was united with their desire for social influence.

According to the communist cultural politics, Orfeo spread an oppositional, hostile western ideology and its members led immoral lifestyles because of their commune. Orfeo became an “issue”: attacking articles in the press, surveillance, police investigation, interrogation. Finally, in the mid-1970s the group broke up.

The history of Orfeo is complicated. The student movements in Paris in 1968, the new left ideologies, the revolution in Cuba, respect for Che Guevera, and an interest in Maoism had an impact on the group. They criticized the communist system, the injustices in the social order, and the Janus-faced politics of the party. Their activity was characterized by the reform of artistic forms, discussions of political issues, and the desire to have impact on social issues. They wanted to create a shared life with real meaning.

The puppet theatre group was established at the University of Fine Arts. The founders were sculptor István Malgot, photographer Péter Fábry, graphic artist Mihály Kiss, puppet designer Ilona Németh, sculptor-teacher Zsuzsa Lóránt, and graphics teacher Huba Bálványos. To create a performance with puppets it was necessary to invite actors and musicians. The first production was “Orfeo’s Love,” which gave the company its name. The production was an allegory about Che Guevara.

The puppet and the music group organized performances in the “Angela Davis” youth club in Kőbánya (a typical worker district of Budapest). Orfeo was a political theatre and it was unique in this field of art in Hungary. The theatre company’s important plays included Etoile (1971), a play about the theoretical and practical content of revolution, and Vurstli (1972), a play about the relationship between power and the individual. According to Tamás Fodor, this last production expressed in the most precise way what they thought about the world around them. The communist cultural politicians regarded it as a dangerous political metaphor. After the performances, they held discussions about it with the audience.

The aim of the community was to improve and foster political thinking and social self-reflexion. István Malgot said in his interview that they saw around them party bureaucracy, the rule of the communist elite, and the low standard of living of the workers. They believed that society would change along the lines outlined by Marx. Péter Fárby emphasized their need to make their own community. They felt the lack of the genuine communal feeling in everyday life, in spite of the collective ideology of communism. According to Tamás Fodor, they thought that they had to find their own independence in their own communities, and members were not allowed to follow.

Orfeo built up two houses in Pilisborosjenő (15 kilometers from Budapest) between 1972 and 1974, where the members of the theatre group and the members of the puppet group lived and worked together. They created their own commune, which was based on shared artistic work. The value of physical work was great in this mental community. Numerous members worked in factories, and so it was particularly exhausting for them, after a hard day’s work, to prepare for the performances.

In 1972, the political police began investigating the “Orfeo’s issue.” They interrogated the members, and the company’s operating permit was withdrawn. They were banned from every community centre, and students were forbidden from attending the plays. The next year, the Theatre Arts Association negotiated on the alternative theatres. They stated that these companies were dangerous and that they spread hostile, Western ideology among young people. Only some official person protected the amateur groups.

This attack got more attention in the public when the central journal of the Hungarian Young Communist League, entitled Hungarian Youth, wrote articles about Orfeo. The author accused the members of the group of immoral behaviour. According to him, Malgot, the main protagonist, wanted to cut off children from their parents and intended to create a commune, a sort of big family. He wrote that Malgot broke the rules of social coexistence. Finally, the prosecution did not bring any charges against the members of the group, but the aftermath was serious: Orfeo was banned from every community centre and no one was allowed to write about Orfeo in the press. The accusation concerning sexual abuse and a man allegedly abusing his power interested the authorities not as a violation of rights with serious implications. For them, the allegation of sexual abuse was relevant only for its political implications, i.e. as a clue to detect anti-communist thinking and anti-communist individuals. Thus, they politicized gendered-based dominance and, in doing so, also concealed it.

The history of Orfeo is partly the history of the connection between art and politics. The assault against Orfeo was followed by other acts of retaliation against amateur theatre companies. The younger generation began to lose interest in this kind of art in the mid-1970s. First the Orfeo music band left the group, then Orfeo Studio left, and the theatre company became independent in 1974. It changed its name to Studio K and continued with its work, and it remains active today. The puppet group kept the name Orfeo and continued to work in different official theatres.
read more
Original Videojournal Ltd.

The Original Videojournal Ltd. was founded in 1991 as the full-fledged successor of the underground group OVJ in the new socio-economic system. Some members of the company were part of the original editorial board and Pavel Kačírek became the director of the company. The original business plan was to produce documentary films commissioned by Czech Television or private companies and because of that, OVJ joined many famous filmmakers – among others Marie Šandová, Kristýna Valachová, Petr Nikolaev, Petr Slavík, Olga Sommerová, Pavel Koutecký, Věra Chytilová and Václav Borovička. Contracts with public television were, however, disadvantageous, so production consisted mainly of two new issues of the Original Videojournal, one as a monothematic documentary about Václav Havel, and then of theatrical records. Until 2010, the company owned most of the original uncut video cassette tapes that were filmed for the Original Videojournal issues. 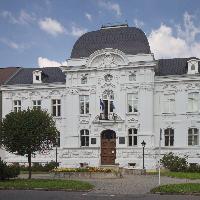 The Ostrava City Archive (Archiv města Ostravy) was founded in 1923 when Alois Adamus, a teacher from the Ostrava grammar school, became the city’s archivist. The archive has been available to the public since 1925. In later decades, the archive went through many organisational changes, for example, during the Second World War and in 1960 during the change of territorial structure of Czechoslovakia. Since the 1960s, the archive has been publishing the almanac “Ostrava” and other publications and it has also organised exhibitions and other popular events. It took part in organising the celebration of the 700th anniversary of the foundation of Ostrava in 1967 and published “Průvodce po archivních fondech a sbírkách městského archivu” (The Guide through the Archive Fonds and Collection of the City Archive”. It has used its current name, “Archiv města Ostravy”, since 1969. After 1990, in the times of vindications, restitutions and privatizations, the archive was intensively looking for documents, issuing certificates etc. The archive is active both in scientific and in popularizing ways these days; it publishes many publications and organises lectures and exhibitions.

The Ostrava City Archive, a department of the Ostrava City Hall, is an accredited archive of a territorial self-governing unit – the municipality of Ostrava – according to Act No. 499/2004 Coll. on Archiving and Records Management and on the Amendment of Selected Acts and following regulations. The archive consists of the Archival Department and the Department of Services, a chronicler of Ostrava is also organised within the archive. The archive supervises fulfilling pre-archive care for materials, accepts them for permanent storage, makes them available for the public, searches for and provides information, is active in researching the history of the Ostrava region and publishes books on the topic and guarantees writing of the city’s chronicle and methodical supervision of the chroniclers of city districts.

The Ostrava City Archive now cares for 6358 metres of archive materials from 1362–2017. In the archive, there are documents of authorities of municipality and state administration, working in the city and district of Ostrava, or in municipalities that are now part of the city (city council, local municipalities, local committees, district councils), authorities of justice (district courts, district attorney), documents of schools and hospitals, associations, church administration (parish authorities of the municipalities), personal collection of personalities associated with the region etc. A part of the archive are also collections, e.g. a collection of maps and plans, pictures and postcards, posters and administrative prints, building files of demolished objects etc. At the end of 2017, there was 1505 archival fonds and collections, 880 of which have been processed (available or partly available for public).