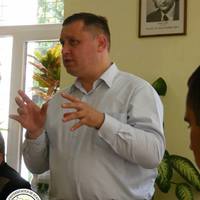 Igor Cașu (b. 8 October 1973, Borogani, Leova district, Republic of Moldova) is a Moldovan historian, who specialises in the communist period. In 2010, he created the Centre for the Study of Totalitarianism at the State University of Moldova, serving as its founding director. As a member of the Commission for the Study and Evaluation of the Communist Totalitarian Regime in Moldova (created by presidential decree in 2010), Igor Cașu was part of the Moldovan “archival revolution” that led to an unprecedented access to formerly restricted archival collections (notably those of the KGB, the Interior Ministry, and the Communist Party). However, this period was short-lived, and access restrictions were reinstated after the Commission ended its work. This increases the value of this private collection, which holds a significant number of copies of archival documents that are not available to the broader public. These carefully selected sources allow an in-depth study of the communist period in Moldova, despite the obstacles that systematic research in public archives still encounters. Igor Cașu is willing to share these documents with the broader research community, which represents a welcome departure from the reluctance of public depositories to open their collections to the public without any restrictions.  At present, Igor Casu continues to serve as Director of the Centre for the Study of Totalitarianism and is also an Associate Professor in the Faculty of History and Philosophy of the State University of Moldova.

Although he had no anti-regime family background, Igor Casu states that his first critical attitudes towards the regime surfaced in late 1988 or early 1989 and were connected to his membership of the Communist Youth League (Komsomol). He decided to leave the organisation in the context of the wave of glasnost’ and of the emerging historical debates of the Gorbachev era. This act was also possible because of the relaxation of the regime, as a result of which the consequences of this type of behaviour were less severe compared to previous periods. He did not participate in other significant or crucial events related to the movement for “national emancipation” in Moldova.

In his understanding, the extent of cultural opposition in the MSSR was significant, but it was present “to a smaller degree than in other regions of the Soviet Union (e.g., the Baltic states, Western Ukraine or Georgia).” Igor Cașu’s definition of cultural opposition encompasses certain “acts perceived as less political, but nevertheless critical of the regime,” mainly in the field of “cultural policies, linguistic issues, but also [cases] of intellectuals in different spheres (writers, painters, other artists) who expressed ideas that were defined as anti-Soviet or dangerous to the regime.” Cașu emphasises that defining the concept of “cultural opposition” raises a “very difficult methodological issue,” mainly due to the shifting attitude of the authorities towards cases of oppositional discourses and activities.  As he aptly observes, the changing priorities of the central institutions influenced their perception on dissent and implicitly their reaction to such cases. To illustrate his point, Cașu gives the example of the use of the Latin alphabet in the MSSR. Despite the official prohibition of this practice, the consequences for its users could vary widely from one decade to another. Also, for Cașu, “the concept of ‘cultural opposition’ is a construct, whereas the concrete cases of cultural and political opposition can hardly be separated in reality.” This uncertainty also stems from the fact that, in the eyes of the communist authorities, the hierarchy of the relative danger associated with certain acts varied widely, not only across time, but also across space, in the case of different communist regimes.