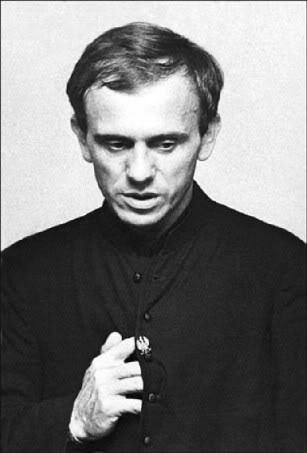 Erazm Ciołek had a close relationship with Reverend Jerzy Popiełuszko (1947-1984), a Roman Catholic priest and staunch supporter of the Solidarity movement, who was abducted and murdered by security police in October 1984. The crime galvanized Polish society, shocked international public opinion, and had a surprising resolution. The three direct perpetrators and their supervising officer were arrested, tried, and sentenced to long prison terms by the General Jaruzelski government. However, security officials responsible for the crime were never brought to justice. Some 250,000 people attended the funeral of Popiełuszko, the largest public protest against the communist regime since the imposition of the martial law in December 1981. In 2010, the Roman Catholic Church beatified Reverend Popiełuszko.
The sixteen photographs by Erazm Ciołek documented the life, death and funeral of Reverend Popiełuszko. They were quickly assembled into an exhibition, which went on display in nine churches. Ciołek's photos gained enormous popularity and contributed to the spiritual cult of Popiełuszko and his transformation into a religious martyr. Ciołek's photos are also part of the permanent exhibition of the Museum of God Servant Reverend Jerzy Popiełuszko located on the grounds of St Stanisław Kostka's Church, Popiełuszko's last parish in Warsaw.