Activities on the Head, performance, 1978 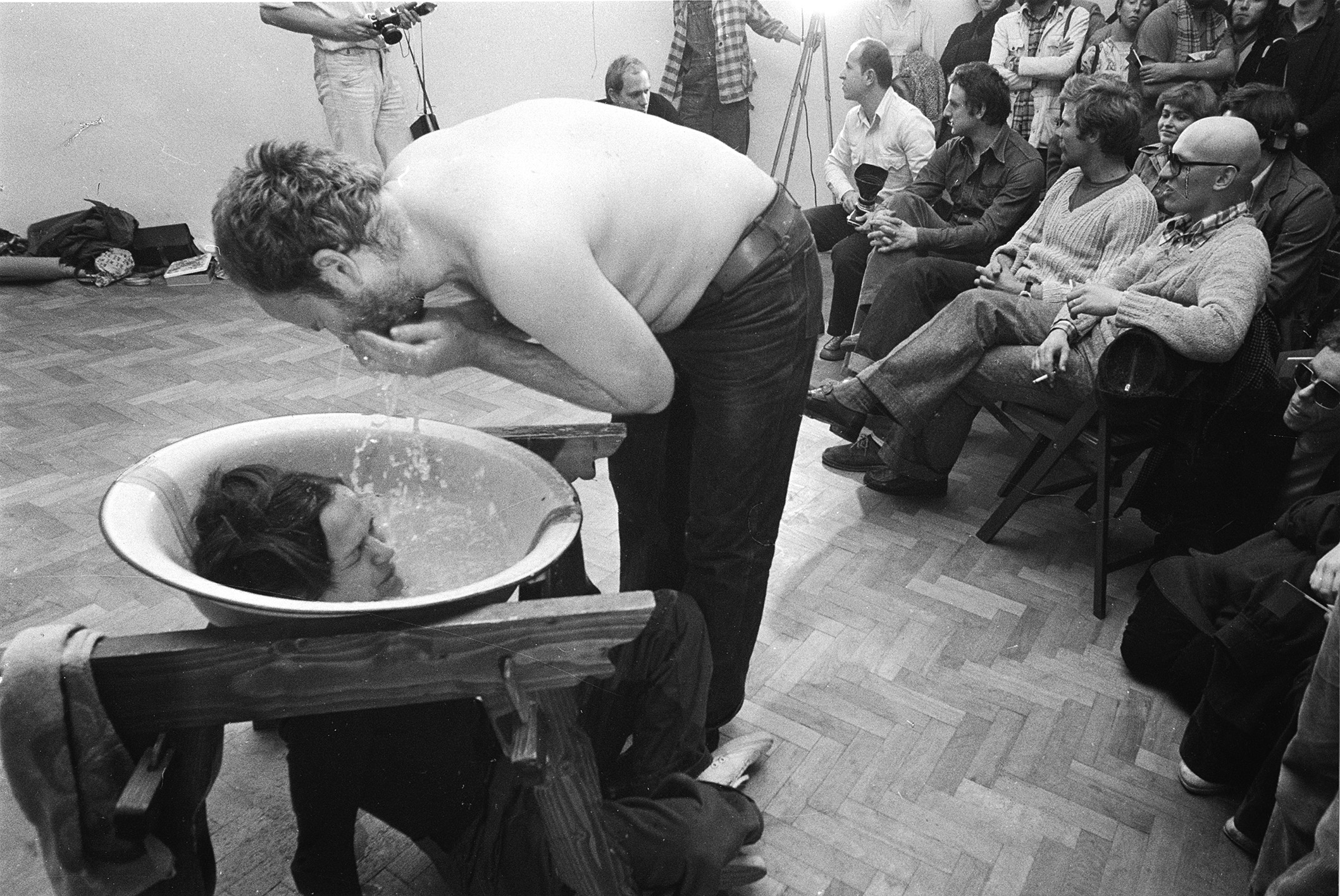 The series of performances by the KwieKulik duo titled “Activities on the Head” was conducted during the “Body Performance” festival at the Labirynt gallery in Lublin in 1978.
As a part of one of the actions, famous for the iconic photo, Przemysław Kwiek washed his face and feet in a bowl in which there was the head of his artistic and life partner, Zofia Kulik, placed there via hole cut in it.
This was not the first time KwieKulik used their own or models’ faces and heads in their actions. In 1971, together with their artist friends they carried out the Game on an Actress’s Face. It was a camera-recorded process visual game. The actress was Ewa Lemańska, widely known to the general public from her role in the highly popular JanosikTV series. The artists, outside the frame made subsequent moves on the face of the actress using visual gestures. Each gesture had to refer to the previous one and be open to the next step. They painted her, put scotch tape and glued crepe paper and colourful sticks, or made small modelling clay sculptures. One of the participants placed a piece of glass between the actress’s teeth and put a lighted cigarette on it.
The full description of the series of the 1978 performances is available in the 2012 monumental book summarising the activities of KwieKulik:


“In the first part, before entering the hall, the audience was asked to stick small red pennants behind their ears. [...] As they were entering, they saw Kwiek and Kulik with their heads stuck in the seats of two chairs.
In the second part, Kulik sat on the floor with her head sticking out of the bottom of a bowl. After pouring water into the bowl, Kwiek washed his face, took off his shirt, washed his armpits, and finally took off his shoes and socks, and washed his feet. After that, Kwiek poured more water, so that it covered Kulik’s mouth but not her nose, so she could breathe but could not speak. He then put a sharp tip of a knife against the back of her head and started to shout: “Say something, you whore, come on... you can’t, can you?!” In the third part the audience saw Kwiek and Kulik sitting on the chairs with bins on their heads (there were openings for their heads in the bottoms of the bins). As it was previously arranged, two artists (Janusz Bałdyga na Łukasz Szajna) proceeded to circle around the artists, tossing rubbish into the bins, which they had earlier taken out of a container in the corridor of the gallery.”

The title of this performance was used as the title of a collective exhibition at the Museum of Modern Art in 2015, which present new phenomena in Polish art. The title was used as a general metaphor of “«procedures» for the viewer's head, but also works that use the mind as a tool to «calibrate» what is both visible and invisible around us.”
The still frame with Kwiek washing his face above the bowl with the head of Kulik was also used for the cover of the monograph summarising the activities of the duo.