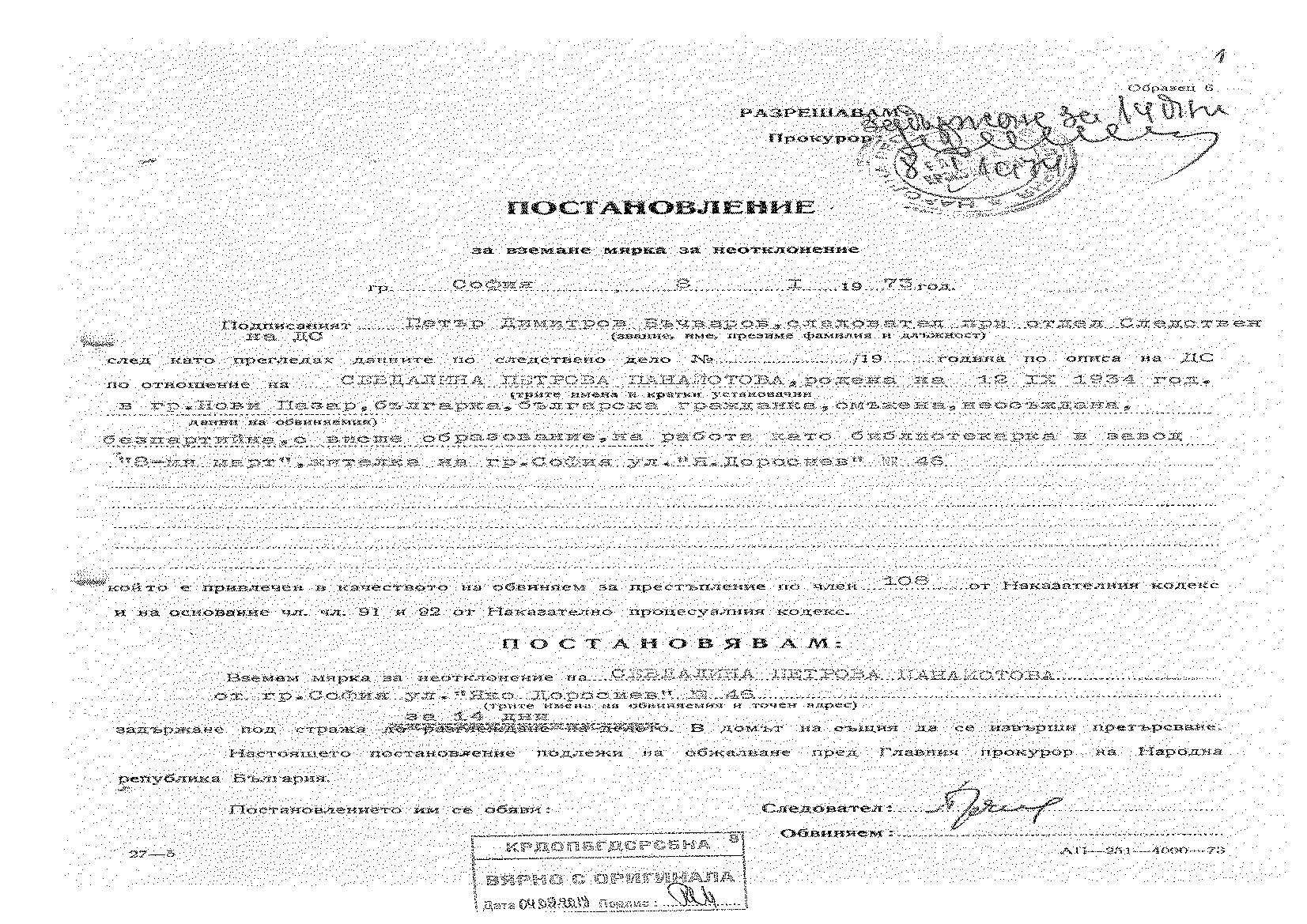 This dossier consists of the State Security file on Sevdalina Panayotova, created in the early 1970s. It shows how the state observed and persecuted critically minded members of the intelligentsia, even when their actions had hardly become public. It is also evidence of dissenters’ strategies to create room for critical thought, based on social networks and private spaces.

At the beginning of the 1970s, Sevdalina Panayotova became the center of a group of people with dissident inclinations. The group included former fellow students from Sofia University and colleagues from the March 8 Factory, where she worked as a librarian at that time. They read forbidden literature (such as Alexander Solzhenitsyn’s One Day in the Life of Ivan Denisovich and Cancer Ward, Thomas Mann's A Sketch of My Life, Nikolay Raynov’s Mysticism and Faithlessness, and others), discussed the mistakes of socialism from a philosophical and socio-political point of view, and criticized the nomenklatura and others. Sevdalina Panayotova tried to establish a literary and philosophical workshop in the March 8th Factory and worked out a plan for the topics to be discussed. In parallel, she had two of her closest friends take a survey among their colleagues on Youth and Socialism. The idea was to write a critical account of the situation of Bulgarian youth, which was to be exported to the West (on a ship) and published there. For this purpose, she contacted a sailor from Burgas.

In 1972 the State Security opened a so-called “Terrorist Operational development case” against a close associate of Sevdalina Panayotova, Georgi Konstantinov Georgiev. Georgiev had been "sentenced to death in 1953, commuted into 20 years' imprisonment, as an organizer of a terrorist organization that committed various bombings, including the one in the 'Park of Freedom' on 3 March 1953, at the Stalin's monument..." (according to the State Security file).

Sevdalina Panayotova was then also put under surveillance by State Security. Sevdalina Panayotova and Petar Peev were accused of being anarchists. Some months later, in July 1973, Georgi Konstantinov Georgiev emigrated from Bulgaria. Petar Peev was sentenced in September 1973 to the forced labor camp in Belene for 3 years as “an irrepressible enemy of the people's republic and socially dangerous".

Sevdalina Panayotova was subjected to day-to-day pressure from the State Security including a search of the apartment and a series of interrogations for "reading and disseminating literature directed against the socialist system". State Security accused her of “conversations in which you expressed slanderous information about the public and state system”. In September 1974, she was detained for 14 days as “accused under Art. 108”, i.e. “Anti-government propaganda and agitation, spreading defamatory claims and literature affecting the state and public order”. Further on, the file reads: "It was found that Sevdalina Panayotova did not commit any criminal activity because of which she was released on 18 January [1974]”. However, because of her "bad influence" on the youth, State Security found "it expedient [for her] to be expelled from Sofia". Thus, Sevdalina Panayotova was forced to move with her family to the small town of Chepelare in the Rhodope Mountains. Due to a lack of evidence, her investigation was terminated in the spring of 1974.

All quotations are from the file "Investigation Case No. 6965 Anarchists", Central Archive of the Commission for the Disclosure of Documents and Declaration of Affiliation of Bulgarian Citizens to the State Security and Intelligence Services of the Bulgarian People's Party Army (CRDOPBGDSRSBNA), Arh. No II sl.d. 6965; III raz. 32666r.