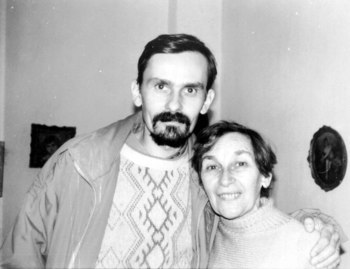 Leontin Horațiu Iuhas (b.  14 December 1956, Cluj) is the son of the Romanian dissident Doina Cornea and the lawyer Cornel Leontin Iuhas. After graduating from the Technical University of Cluj-Napoca, he was employed by the Computing Centre of the Cluj Regional Mining Company for Extracting Salt and Non-metallic Minerals (Centrul de calcul al Întreprinderii Miniere – Centrala Sării si Nemetaliferelor). In the 1980s, he gave moral and logistical support to the oppositional activities of her mother. Taking advantage of the fact that he had access to the technical copying equipment of the computing centre where he worked, Leontin Horațiu Iuhas, with the help of other colleagues, multiplied the samizdat translation of the book L’épreuve du labyrinthe: Entretiens avec Claude-Henri Rocquet (Eliade and Rocquet 1978), a volume of interviews conducted by the French writer Claude-Henri Rocquet with the Romanian-born historian of religions Mircea Eliade. Leontin Horațiu Iuhas also helped his mother to circulate approximately 100 copies of this samizdat publication (Cornea 2009, 188–190). In November 1987, Doina Cornea and Leontin Horațiu Iuhas distributed 160 copies of a manifesto of solidarity with the 1987 workers’ uprising in Braşov. As a result of his involvement in this action, he was arrested together with his mother on 19 November 1987. From 19 November 1987 to 24 December 1987, he and his mother were interrogated for their oppositional activity against Ceauşescu’s regime. The interrogation of Iuhas by the Securitate focused on the one hand on his involvement in supporting the oppositional activities of his mother, and on the other hand on how Doina Cornea managed to send her letters to the West. They were set free from Securitate arrest only after Western governments pressed the Romanian communist authorities for their release. Before and after his arrest, Iuhas was put under close surveillance by the Securitate. After his release from detention in December 1987, the Securitate harassed and threatened him with the loss of his job in order to make him give up any acts of defiance (Interview with Leontin Horațiu Iuhas). In the spring of 1989, the state mining company where he worked fired him by invoking a reduction in staff. Leontin Horațiu Iuhas and Doina Cornea were involved in the local uprising against the Ceauşescu dictatorship on 21 December 1989, the former assisting his mother in her role as unofficial representative of the population of Cluj. After Doina Cornea’s death on 4 May 2018, Leontin Horațiu Iuhas became the owner of the Doina Cornea Private Collection.