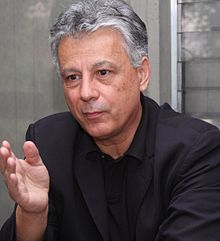 Dorin Tudoran (born June 30, 1945, Timișoara, Romania) is a Romanian poet, essayist, journalist, and prominent dissident. A resident of the United States since 1985, he is the author of more than fifteen books of poetry, essays, and interviews. Born in Timișoara, he attended the Mihai Viteazul High School in Bucharest, until 1963. He pursued his studies at the Faculty of Languages and Literature of the University of Bucharest, obtaining a B.A. degree in 1968. Tudoran made his literary debut in 1973 with a volume of poetry, Mic tratat de glorie (A Little Treatise of Glory). He was an editor at the journals Flacăra (The Flame) (1973–1974) and Luceafărul (The Morning Star) (1974–1980). From 1977 to 1981, he belonged to the ruling council of the Writers’ Union of Romania. Tudoran emerged from 1976 as one of those young authors who who were in conflict with the older generation of writers. In the early 1970s he had benefited from the relative relaxation of the regime to make frequent trips abroad, and thus was able to establish contacts with a number of employees of Radio Free Europe (RFE) and other Romanian exiles, which was to facilitate his later dissident activities. Tudoran’s dissidence originated in an internal conflict, which erupted during the Writers’ Union Conference in July 1981. Tudoran launched a series of polemical articles which exposed cases of plagiarism in works of writers from the group obedient to the party. He gradually evolved from his early views, restricted to problems of culture, to a critique of the communist regime. In 1983, Tudoran was the first dissident who radicalised himself to the point of asserting that arbitrariness of decision-making was part of the very essence of the communist system. Through his fellow dissident Mihai Botez, Tudoran acquired a channel of communication with RFE, which he used in the following years to propagate his views. In an interview which he granted to a Vienna-based correspondent of France Presse on 7 September 1983, Tudoran clearly stated that Ceauşescu’s regime constituted an absolute dictatorship, while the Party was reduced to a simple appendix to his personal rule. He also co-signed a memorandum, which Geza Szőcs initiated and addressed to the United Nations in order to draw attention to the violations of minority rights in Ceauşescu’s Romania (he was the first dissident of Romanian ethnic origin to do so). Nevertheless, Tudoran’s most important dissident text remains his seventy-page-long essay on the condition of intellectuals in communist Romania, Frig sau Frică? (Cold or Fear?). Written in early 1984, this essay was published in French in L’Alternative (co-edited by Mihnea Berindei), a periodical which closely covered the dissident movements in East-Central Europe. At that time, Tudoran’s work was evaluated as the most radical text of a Romanian dissident since Paul Goma. Deeming his situation in Romania to be hopeless after expressing such radical views, Tudoran decided to immigrate to the United States and submitted the appropriate application for his entire family to the US Embassy in April 1984. Although he was granted an entry visa in July 1984, the Romanian authorities denied him an emigration visa. To protest at his worsening situation, Tudoran went on hunger strike and wrote several open letters to Ceaușescu in which he explained his reasons for leaving Romania. He viewed emigration as a fundamental human right, seeing himself as a “political hostage” of a brutal dictatorship. An international campaign for him to be allowed to emigrate was launched. Coordinated by the League for the Defence of Human Rights in Romania (with the direct involvement of Mihnea Berindei) and RFE, this campaign was supported by a number of well-known Western writers, historians, and political scientists. He finally got an exit visa on 2 July 1985, due to the pressure of the US Congress, which was reviewing Romania’s Most Favored Nation status. After his immigration, Tudoran worked for a while as an editor for Voice of America (1987–1990). His most important achievement was the creation of the periodical Agora, which was devoted to the propagation of an “alternative” vision of Romanian culture. Published in Romanian, this journal attracted many Romanian exiles and became a notable cultural phenomenon within the Romanian community abroad. After 1990, he started working for the International Foundation for Electoral Systems (IFES), a Washington, D.C.-based organisation. From 2004 to January 2007, Tudoran was editor in chief of Democracy at Large, a publication of that organisation. He also served as Senior Director for Communications and Research at IFES. After the Romanian Revolution of 1989, Tudoran returned to Romania in 1990 as an envoy of IFES. He later worked as country director for the IFES office in Chișinău, Moldova. He helped launch two NGOs in the region – CENTRAS (Romania) and ADEPT (Moldova), and also served on their boards of directors. At present, Tudoran is a frequent editorialist, commentator, and analyst in a wide variety of international media outlets.