Painting 'There is still chant under the broken bridge' 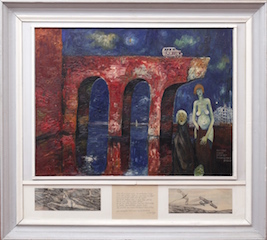 Loewig was no stranger to avant-garde and abstract arts, to which he was extensively exposed during his museums and gallery visits in West Berlin throughout the 1950s. Yet the artist was in his early years rather fascinated by fauvism and expressionism. The motifs of his paintings were similar to his drawings and lithographs. Starting mid-1960s Loewig gave up on painting, strongly conditioned by economic and space scarcity, focusing rather on drawings and lithographs.

'Welke Wege' [Fading paths] together with the series 'Mein Mund webt ein Fangnetz für den Tod' [My mouth weaves a catch net for death] have been eventually published in 1971 together with the publishing house Steintor in Hanover, shortly before Loewig's departure from the GDR. These can be accounted among the last lithographs series created by the artist while still in the GDR.

The painting belongs to the artworks confiscated by the Stasi, being among the few that was returned to the artist. It was also included in a series of exhibitions, amongst the most recent 'Roger Loewig-auf der Suche nach Menschenland' [Roger Loewig-on the path towards a people's country], organised in 2000 in Museum Nicolaihaus der Stiftung Stadtmuseum in Berlin, celebrating the tenth anniversary of the German reunification.