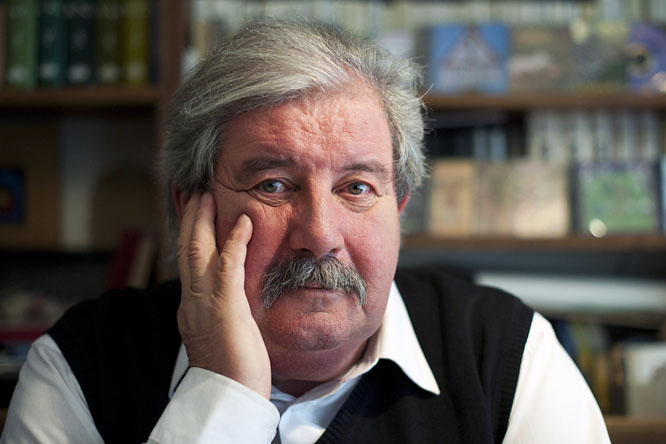 Hungarian Széchenyi Prize-winning folk musician, teacher. Halmos supported the collections of folk music from the beginning. He is one of the founding members of Sebő Band; he was also a member of the band Kalamajka from 1990.
He was born in Szombathely on 4 June 1946. His father, Béla Halmos, was an architect; his mother was Rozália Szabó M. He learned music with his four sisters, and he studied classical music. He married Katalin Gyenes in 1969.

Halmos spent his childhood in Gyula, and it was also in Gyula that he began to study classical music. He graduated from the Faculty of Architecture at the Technical University of Budapest in 1970 as a design architect. Between 1970 and 1972 and 1979–82, he worked at the City Planning and Design Institute [Városépítési Tudományos és Tervező Intézet] as an architect. In 1969 he appeared in the “Röpülj, páva!” [Fly peacock] with Ferenc Sebő. They sang folk songs with guitar accompaniment. Halmos also competed as an individual and won.

He and Ferenc Sebő founded the Sebő-Halmos Duo and, in 1974, the Sebő Band. Thankfully, the best ethnomusicologists (Lajos Vargyas, György Martin, Zoltán Kallós, László Vikár, and Bálint Sárosi) knew about the folk music. Halmos traveled to Transylvania to listen to traditional folk music, and he tried to learn it too. He traveled to Szék (Sic, Romania) and saw the traditional dance house which became the model of the Hungarian dance houses. In 1972, he and his friends organized the first private dance house in Budapest where young people could learn folk dances and folk songs. Halmos became the main character of the dance house movement.

In 1975, he began to publish on Transylvanian folk music, and he started to work at the Hungarian Academy of Sciences and the Institute for Musicology. Halmos collected folk music and folk songs from Ádám István. Halmos established the Folk Dance House Archive in 1999. The Hungarian Heritage House got the Archive in 2001. His bequest is also available at the Hungarian Heritage House as the part of Lajtha László Folklore Documentation Library and Archive.

Halmos got many prizes, and he was the main character among the organizers of dance houses from the 1970s.