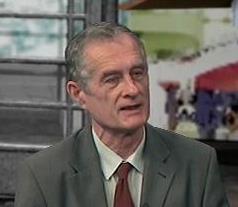 Csaba Gy. Kiss (1945) is a Hungarian historian, literary historian, and former politician. He studied Hungarian and German language and literature at Eötvös Loránd University (graduated in 1968), after which he worked at the Research Institute of Higher Educational Pedagogy until 1971. He worked at the Hungarian Academy of Sciences Institute of Hungarian Literary Study (1974–1977, 1981–1985) and as part of the Research Group of East-European Literature at Eötvös Loránd University (1978–1981). He was one of the founders of the Bethlen Gábor Foundation, and he worked in the secretaryship of the Foundation after 1985. Between 1986 and 1992, he worked at the Research Institute of Hungarian Culture. In 1987 he contributed to the foundation of the Hungarian Democratic Forum, and until 1993 he was one of the main members in the leadership of the party. From 1988 until 1992 he was a co-worker at the periodical ’Hitel’ (Credit). He was the director of the Central-European Institute (1992–1995), and from 1995 he has taught at the Culture-Historical Faculty of Eötvös Loránd University. He has written several studies on the literature of Central-Europe.