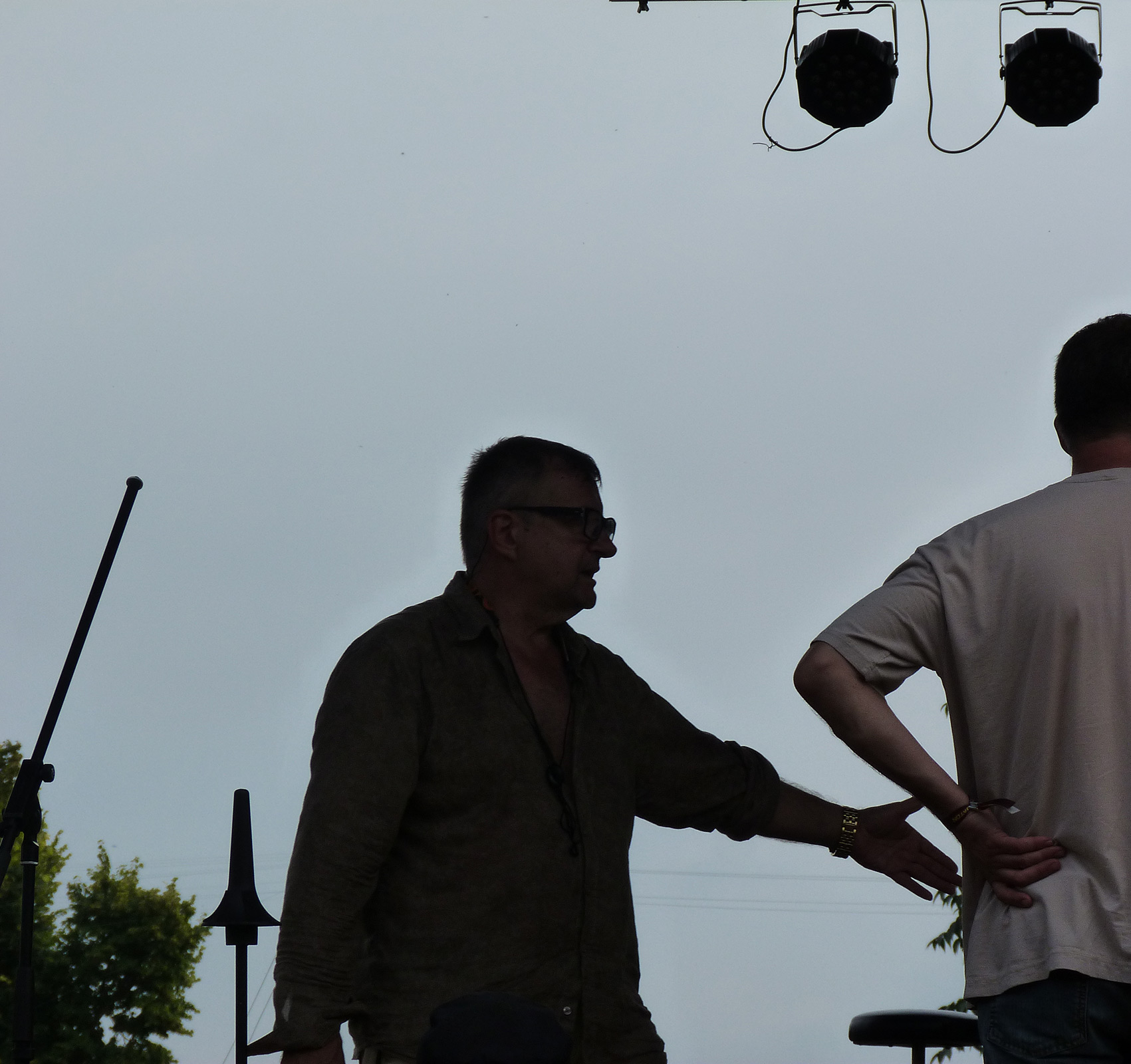 András Wahorn - originally András Pintér - is an avantgarde painter, designer, filmmaker, producer, musician, and founding member of the Vajda Lajos Studio and the Bizottság (Committee) group. In elementary school he already decided to be an artist when he would grow up, but after finishing high school, he learned art autodidact. When he was sixteen, he had the rare opportunity to visit his mother in Canada. He spent two months in Vancouver, which was a shocking experience for him: “I got to know a very special world while I was there, and it was very traumatic to come back home. It was only then when I really saw the difference. Not when I went abroad, but when I got back. The day after I arrived I was standing on the Petőfi Bridge, waiting for the tram - that is when I realized how different the people are” - remembered in a 2004 interview.

He had several exhibitions since 1969: he experiments with almost every genre, his various works in music, fine art, and cinema complement each other closely.  He won at an exhibition of the Studio of Young Artists’ Association at the age of 22. In 1972, he was a founding member of the Vajda Lajos Studio, composed of amateur artists. This was the community from which the legendary band, Bizottság (Committee) grew out by 1980, started by András Wahorn, István ef Zámbó, László feLugossy and Sándor Bernáth(y). Initially, the goal was to enter a talent show, and as they make it to the finals, they could send a rude message on TV to everyone by doing an outrageous performance instead of the expected “pretty blues”. While they fell out of the race even before it really started, they continued to play music together. The band, mostly composed of (visual) artists first played in front of audience as the opening act before Beatrice, on August 23, 1980, and they soon became a favorite of the intellectuals of the alternative-underground sphere.

According to their own assessment, none of them really knew how to make music: their concerts were more like performances, criticizing how things worked in the Kádár era. They did not care about being professional either, it was about having fun: as they called it, they played “leisure music”. Nonetheless, their lyrics were more surreal than political. Therefore, against all the odds, their first disc, Kalandra fel! (Adventure time!(?)) could be published in 1983. As Wahorn recalled it in a 2014 interview: “We thought that political commitments are incompatible with freedom. What mattered to us is to be able to express ourselves as we wanted.” The first disc was followed by a second one, Jégkrémbalett (Ice cream ballet), and a movie by the same title, directed by Wahorn. It was also him who designed the covers for the albums. The possibility to publish a disc, as Wahorn sees it, was not really their own achievement. It was because as new wave was already spreading in Hungary at the time, it became more and more embarrassing that the trend was absent from the Hungarian music industry. All they did was to jump on the opportunity. At the middle of the 80s, Bizottság also had the opportunity to go on a Western European tour. Even though this seemed to be almost impossible at the time. They gave up on it already, when they received their passports afterall, two days before leaving. Due to Wahorn’s persistent pedlary, they also received their visas just on time: the tour was back on. Nevertheless, their career was not without difficulties: they often encountered obstacles trying to perform and at times they were simply not allowed to, and publishing a disc also meant heavy compromises with the authorities. Certain lines had to be changed or left out, and they were quite strict on what songs can be published and what songs cannot. The result was an album with only a fraction of their songs, and the second album only contained songs newly written for the movie Jégkrémbalett. Therefore, today, most of their repertoire is simply lost, as they were never recorded in any form.

Meanwhile, Wahorn, as other members of the Bizottság, did not stop with his fine art activities: during the ‘80s, he actively worked as a painter and as a graphic designer. The obstacles encountered regarding their exhibitions were very similar to what they experienced as musicians. Shortly after the Western European tour in 1985, the band split up, but none of them stopped painting, making music or movies. Bizottság still remains a cultic band: in 2011 they held an exhibition at the Hall of Art in honor of the band, and in 2013 they were the inspiration for a contemporary dance opera. Wahorn is not obviously happy with this legacy: for example, he is rather disappointed about that most people are still more interested in what they did thirty years ago during the Bizottság era than anything they accomplished afterwards. Nevertheless, it was an important period of his life: “... when I was there, I did not feel happy, but obviously, those were the best years of my life. How interesting, and how sad that those people who only became smarter, stronger, more skillful since then also became much less interesting!” - remembered in 2006.

In 1988, Wahorn founded Rex Wahorn Studio. After the regime change, he first moved to Canada, then to the United States. In 1990, the authorities banned a song from his album Tengerhajózás (Seafaring) commemorating his plan to leave country. During his 13 years abroad he worked as a web designer and a background artist. In 2006, he moved back to Hungary. He since lives in Mezőszemere, a village at the countryside. He is still active as a painter and often works with his life partner, Kata Tüttös, who is also a painter. Beside this, he continues to play in several bands, and became a quite active public figure as well. His paintings were featured at several exhibitions home and abroad alike over the years, and in 1993, he received the Munkácsy Prize in recognition for his work. His works can be found at the Hungarian National Gallery, the Budapest History Museum, the Petőfi Literary Museum, and at several private and public collections both home and abroad.