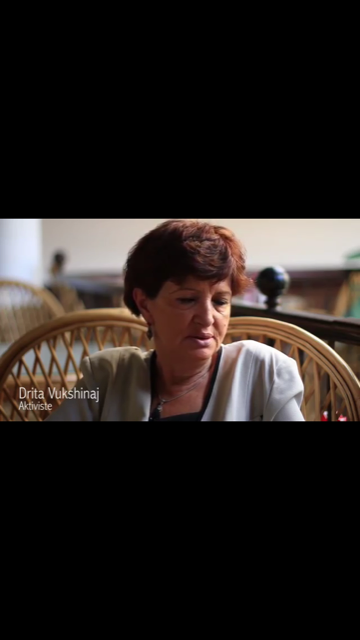 Drita (Luri) Vukshinaj was born in Prizren on 10 March, 1954.  She graduated from the Technical High School and worked as a floor manager at Progres, a synthetic fiber factory in Prizren. Coming from a non-openly political family, Vukshinaj is a great example to illustrate women’s voices. After injuring her leg at six-years old, there were no options offered to her in Kosovo at the time (1960) except for amputation. Her father, not wanting two women to travel alone, would not allow his wife to accompany Vukshinaj to Skopje to receive better care. When Vukshinaj turned thirteen, and found a treatment option in Belgrade, her father refused to allow her to stay alone at the Belgrade hospital for an extended period of time. When she threatened to jump from the second-floor window, he relented.  She managed to receive treatment from a hospital in Belgrade on her own, where she remained for a year despite her father’s hesitations, to be able to improve her walking. Vukshinaj’s father’s fear had less to do with ethnic hostility than with his perception of women as property, who were not permitted to leave the house without an escort.

For many adult women in Kosovo, it would have been enough to marry and have children. Though Vukshinaj did these things (She married Akik Vukshinaj, a former political prisoner and engineer, and had three daughters: Fjolla, Filloreta and Sheki), she also became a strong advocate for people with disabilities by working to mobilize patients and provide resources. With her NGO for people with disabilities in Kosovo, Drita Vukshinaj became a lifelong women’s rights and disability rights activist. Drita Vukshinaj died on 9 March, 2016.

KOHI interviewed Drita Vukshinaj on 27 July, 2012. The audio file is available in Albanian as well as the transcripts, which is also translated into English and Serbian. In this extract from the English translation of the transcript, Drita remembers her activist work for the disabled:

“I started working with women when I saw in the daily newspaper Rilindja, I think it was in 1994, that a Handikos office for people with disabilities had been opened in Prizren…I found out from the paper where the office was, and went there on my own. [...] At that time, there were 200 disabled persons registered as members. Very few of them were women; they were mostly men. Until after the war, after 1999, we had some activities, such as helping poor women — especially women in villages. We identified where this category of people lived.

In 1999, the office reopened and resumed its work, and so more humanitarian aid began to arrive after the war. At that time, it was a great surprise that […] all these disabled people suddenly appeared. I was one of those who went out day and night. I was out every day. I went out of town, everywhere, but I had never seen those people before. However, because of the humanitarian aid, people began to declare themselves disabled. We had personal contact with them, but I preferred to be with the women. I talked to them, maybe they were of different ages, 40, 50, 60 [sic] years old, and they were from the city, but I had not known or seen them before, and they said that their families did not let them go out of the house and into society. This motivated me to do even more for this group of people. We started registering them throughout the entire Municipality of Prizren, which had a total of 78 villages. Sometimes it happened that we would go to a house and a woman with disabilities lived right next door, but the family living next to her did not know it. So we would not find out unless the other family accepted us into their home. This was one of the greater difficulties that we had. It happened sometimes that we visited a place several times until we convinced the families that these women need to be out in society, needed to be integrated, needed to gain some skills.”