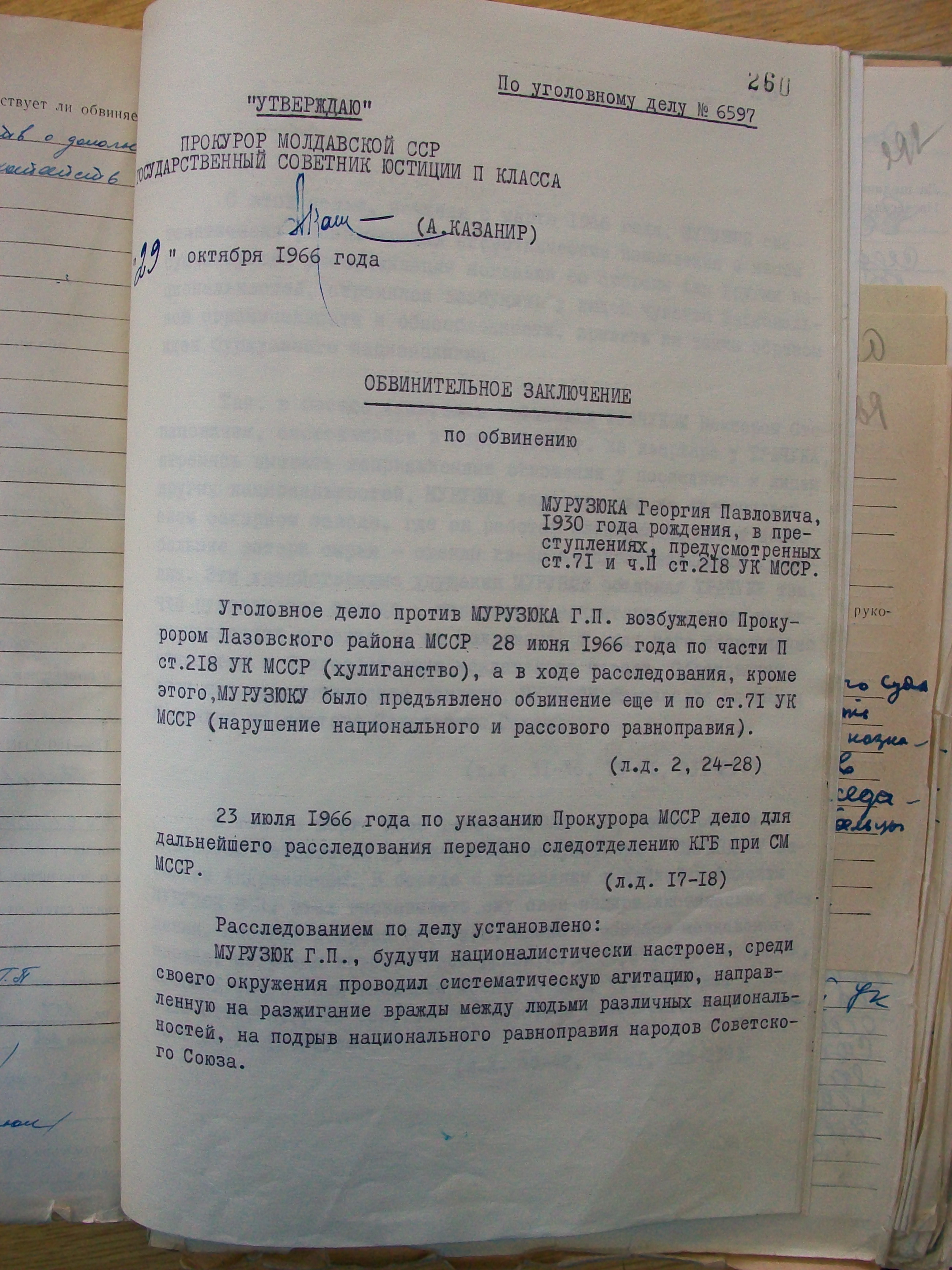 The case against Gheorghe Muruziuc was opened by the district prosecutor on 28 June 1966. Initially he was accused of causing public disorder (“hooliganism”), but later the accusation of undermining the national and racial equality of the peoples of the USSR was added. On 23 July 1966, his file was transferred under the jurisdiction of the KGB. Muruziuc was accused of “nationalist tendencies” and of “systematic agitation aimed at fomenting hatred between persons of different nationalities and at undermining the national equality of the people of the USSR.” According to the act of accusation, it was in March 1966 that Muruziuc began to spread “calumnies and lies” about the “purported discrimination against the Moldavians by other nationalities,” aiming at “rousing feelings of national isolation and separation” among his fellow Moldavians, while “inculcating” them with his “ideas of bourgeois nationalism.” The authorities were especially alarmed by the potential impact of his nationalist views, as exemplified by his conversations with two of his acquaintances: an employee of the police, Trachuk, and a lawyer from the nearby small town of Fălești, Scripcaru, who had served as defence counsel for Muruziuc’s brother. Muruziuc was accused of “distorting the historical development and creation of the Moldavian SSR” and of openly propagating “the secession of the Moldavian SSR from the USSR” and its further development “as an independent nation-state.” The accusation carefully listed all the documented instances of Muruziuc’s nationalist pronouncements, emphasizing his dissatisfaction with the national discrimination against the Moldavians and his conviction of the necessity of the republic’s secession from the Soviet Union. Muruziuc’s intention to display the Romanian flag on 12 June was viewed as “a symbolic demonstration of protest at the alleged discrimination against the Moldavians,” while his defiant act of raising it on the factory’s chimney on 28 June was interpreted as stemming from Muruziuc’s desire to “openly demonstrate his nationalist opinions in front of the masses, intending to foment hatred among Moldavians towards people of other nationalities and to awaken among them… a tendency towards national separation.” Muruziuc’s defiant stance during the party meeting on 30 June clearly aggravated his situation. Beyond the disturbing nature of his message, Muruziuc’s insistence that his views were shared by “the entire Moldavian people” rang an alarm bell for the authorities, as did his slogan of “Moldavia for the Moldavians.” His actions during the factory standoff were qualified as a “grave disturbance of public order.” As a result, Muruziuc was sentenced to two years imprisonment in a labour camp. The act of accusation was issued on 25 October 1966. It is an interesting example of the Soviet authorities’ position toward cases of “local nationalism,” which became more frequent in the late 1960s and early 1970s. The correlation between an individual’s opinions and their impact on society was one of the main criteria for the severity of the sentence, as becomes obvious from Muruziuc’s case.