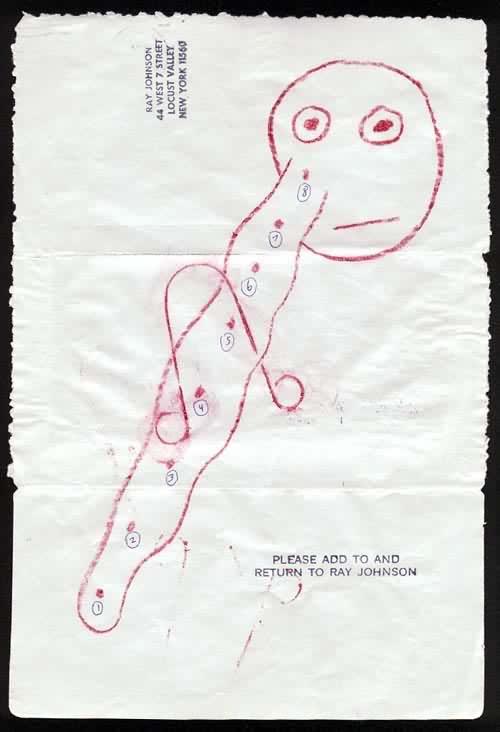 In July 1979, Artpool got Ray Johnson’s mailing address from Romano Peli in Parma. At first, they didn't get any replies to the letters they sent him.

In 1982, Ginny Lloyd, who knew Johnson personally, was visiting Artpool and found it strange that Ray hadn’t answered the letters. Galántai then decided to make one last try with a postcard action: he made twenty postcard-collages and mailed them one after the other over the course of twenty days.

An answer arrived soon. The first was a “send to” letter with drawings, asking that the person who had received the reply send it to Wally Darnell in Saudi Arabia. The drawing or the letter? The request wasn’t clear to Galántai, so he decided not to deliver the letter passively, but instead to become a part of the action, so he photocopied the drawing.

There were four numbered Fan Club stamps on the drawing with four distinctive “bunnies.” He decided to rearrange them to allow for further additions.

A new decision was made. For the upcoming “Artpool’s Ray Johnson Space,” he decided to invent a background institution, the “Buda Ray University” (modelled on the Buddha University).

Copies were made of the modified drawing and then sent to all of Artpool’s mail connections and then back to Ray Johnson.

December 22, 1982 - A letter arrived referring to the second drawing with the inscription “Thank you for all your communications” and a Dora Maar Fan club stamp. The year came to a close with a letter with a Yoko Ono Bunny stamp.

September 28, 1983 - the fourth drawing’s inscription “Thank you for your” refers to the former letter (after nine months) and continues with “send to Peter Below,” and the drawing: a duck in a cloud with the inscription DUCK CLOSE and with a ballpoint pen OH BOYS ALWAYS THE SAME STYLE.

The Buda Ray University gained more and more participants through the continuous posting of the first four letters. The University published a book in 1985 which contained a selection of the letters which had been received up to that time.

February 13, 1986 - Johnson mailed the fifth drawing “BILL de KOONING'S BICYCLE SEAT,” which arrived enclosed with a catalogue of the Nassau Museum, in exchange for the Ray Johnson Artpool Book.

The fifth drawing was the most successful. Many replies came within a short period of time. There were too many replies to include in a single a book, so Artpool had to use another form of publication: the exhibition.

Artpool’s Ray Johnson Space was shown 14 times in 8 different countries between 1986 and 1993, either as part of other events or sometimes as an independent program.