Building Commemorative Monuments to the Revolution of 1989 in Timișoara 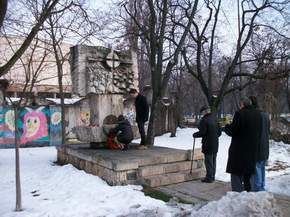 The representation of the Revolution in Timişoara through the intermediary of art – twelve monuments created in memory of the heroes of December 1989 – is a project that was launched in 1992 and concluded in 1999 with the erection in a public place of the twelfth monument in this artistic and memorial suite. The project was taken up by the Memorial to the Revolution in Timişoara, which, on the basis of the witness testimonies in its collection, identified the twelve sites of memory where there were victims during the popular revolt. That these twelve monuments were created is entirely thanks to the Memorial, which took responsibility not only for the identification of relevant artistic projects by respected artists in Romania and abroad, but also for their practical execution through the attraction of financial or material support. The inauguration of these monuments to the Revolution of 1989 in Timişoara has the character of an event permanently taking place in the urban spaces of this martyr-city from which the popular revolt started. As Traian Orban puts it, the creation of these monuments was one of the most important missions taken up by the Memorial: “There is here [in the Memorial], also a dimension that calls for the presentation of the Revolution through art. We created a complex of thirteen monuments marking this moment – twelve monuments making up an ensemble of national interest, and the thirteenth here, in the courtyard of the Memorial, as an element marking twenty-five years since December 1989. Twelve sculptors from this country and abroad took part in the execution of this project. The finance for these monuments came from a number of sources: money from donations, from the Ministry of Culture, from the local authorities. The twelve monuments mark the places where people died in Timişoara.”

With regard to the meaning that these monuments have for collective memory, Traian Orban adds: “It’s hard, it’s costly to put up a monument in this country; we managed to put up twelve. It was out of fear that we did this in the beginning: out of fear that there was a desire to erase the traces, a desire for forgetting. Thus, cancellation, forgetting, or even distorting the meanings of the Revolution towards other false targets. We marked these places because it is known that there, and there, and there, in twelve particular places, people died. They died for freedom, for a better, more dignified life, for democracy.” And he adds that, with the same purpose of resisting forgetting, the institution that he heads has added a museum dimension to the area of Popeşti-Leordeni near Bucharest, where a part of the dead of Timişoara were transported to be incinerated and for their traces to be lost: “We also put up a church-monument at Popeşti-Leordeni. At the back, a visiting place is the sewer hole – where the ashes of the martyrs were thrown. To make things clear, the names of the incinerated martyrs are also given there, for the completely erroneous claim keeps being made that they were foreign agents and unknown persons. No! They were citizens of Timişoara, killed by the communists in December 1989. There was a wish to erase their traces, by order. And quite a lot of traces were erased – they removed bodies, they destroyed hospital documentation, they incinerated bodies at the crematorium, and they took the ashes there, to Popeşti-Leordeni.” As for the thirteen monuments (twelve plus one) in the urban space of Timişoara, these have the status of open works of art through the intermediary of which the Memorial to the Revolution in Timişoara marks the memory of the Romanian Revolution. In connection with the thirteen monuments in the city of Timişoara, Gino Rado draws attention to a recent pedagogical dimension: “Until recently we made pilgrimages to the monuments in the city, the twelve I have told you about. Now we have partnerships with the schools – they have adopted the monuments. Each monument belongs to a school – well, every year they come and make pilgrimages to these monuments. They are the schools that are situated closest to one or other of the monuments. And these acts of homage are made every year, in December. It’s something beautiful and it’s another way of not forgetting.”