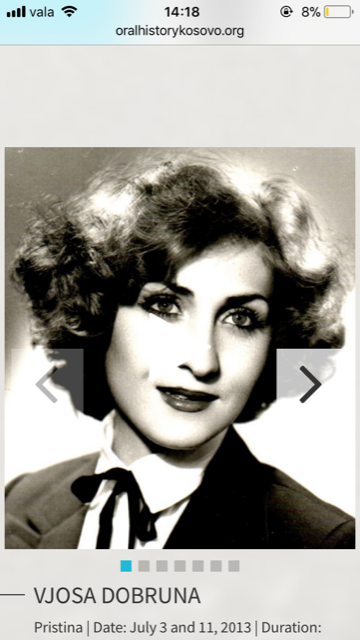 KOHI conducted two interviews with Dr. Vjosa Dobruna, on 3 July, and 11 July, 2013.  Dobruna was born in Gjakova/Đakovica. She works as a pediatrician and a human rights activist, and is a founder of the Center for the Protection of Women and Children, a Safe House for women in Gjakova/Đakovica, as well as the Women’s Center in Tetovo.

Dobruna served as Chair of the Board at Radio Television of Kosovo (RTK), and as National Head of Department for Democratic Governance and Independent Media under the United Nations Interim Administration Mission in Kosovo (UNMIK). Vjosa joined Kosovo’s diplomatic service in 2012 when she was appointed Ambassador of the Republic of Kosovo to the Netherlands. She has received several awards, including the Jonathan Mann Award for Global Health and Human Rights, the Alexander Langer Award for Minority Rights, the Edward Barsky Award for Courageous Physician, and the International Woman of the Year Award.

Vjosa Dobruna became a fierce advocate of women’s health and women’s rights issues during the Milošević era, when violence against Albanian women in Kosovo began to intensify, after she was fired from the hospital where she worked as a pediatrician in the 1990s. Her political activism began earlier however, when she supported prisoners of conscience, three of whom were her paternal uncles. Dobruna provided the detainees with finely ground valium mixed into sugar – one of the items allowed in prison – to alleviate the pain of torture that all detainees endured.
In 1993, Dobruna founded the Center for the Protection of Women and Children in Kosovo with other local activists who shared her disenchantment with the unwillingness of Albanian leadership to recognize that women were being victimized. She also collaborated with Italian feminists to raise funds and support in quite difficult conditions.

As a doctor and human rights activist, Dobruna’s role was crucial in treating and advising women across Kosovo before, during, and after the war. Like Shukrije Gashi and others, Vjosa Dobruna became a fearless leader through lessons she learned from her family: her grandmother, father, and uncle were active as partisans in the war against fascism, and three of her uncles served a cumulative twenty-five years in detention as Yugoslav prisoners of conscience.