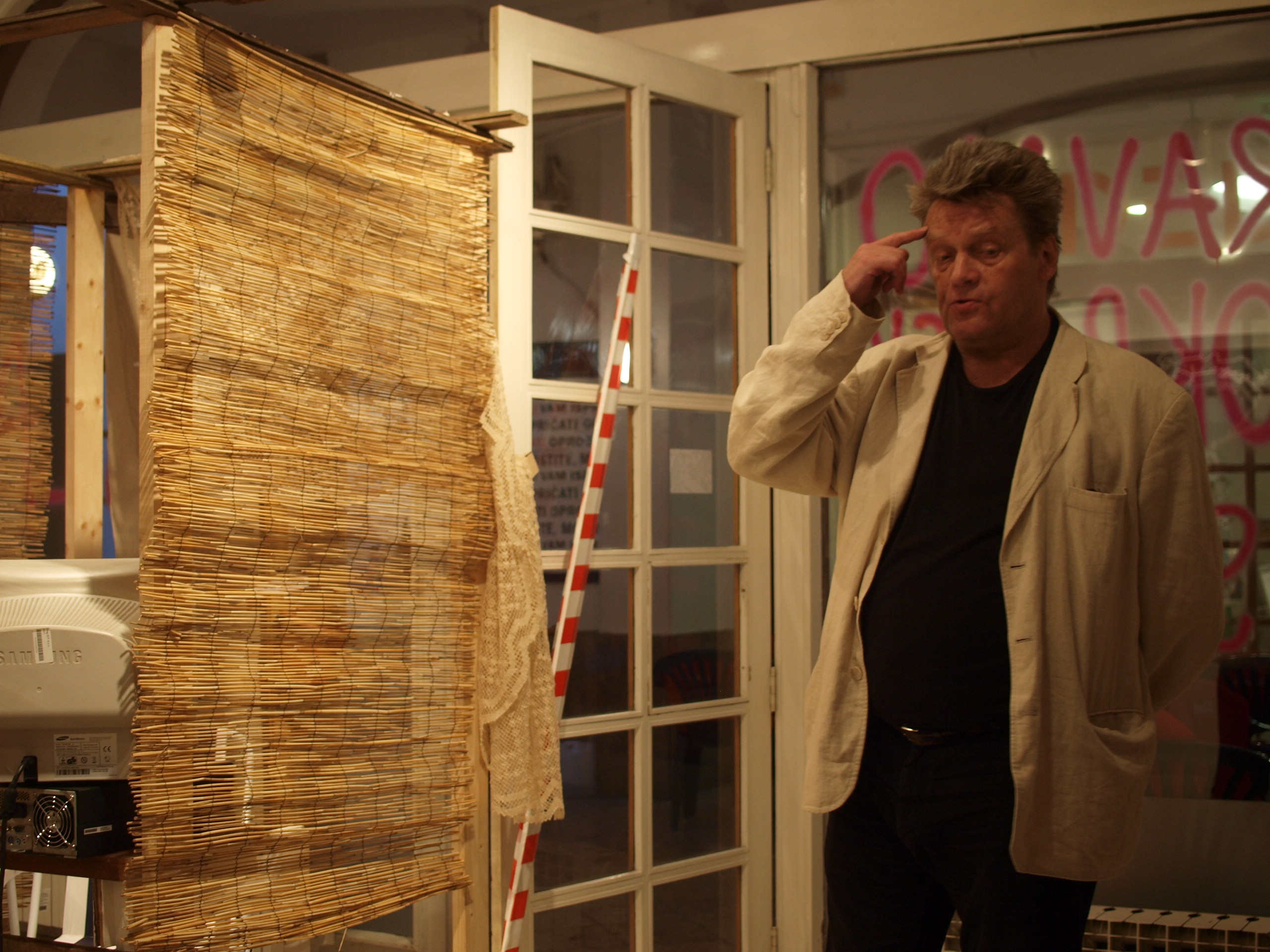 Poet, visual artist, dispatcher, lecturer.
1963 – he begins writing tradition-oriented poetry; later on, as a member of the Dull Poets‘ Circle, participates in poetry competitions dealing subjects concerning current politics.
1966 – initiates (with Gábor Altorjay) Happening & Fluxus in Hungary.
1968 – under the cover name Parallel Course/ Training Track, he founds the International Parallel Union of Telecommunications (IPUT).
1974 – due to his participation in the Samizdat movement, he is arrested by the state defence bureau on charges of anti-capitalist pornographic agitation and conspiracy.
1975 – before his forced exile, he presents the purpose of the Union: Subsistence Level Standard Project 1984 W (Make a Chair! – Hommage à George Brecht – SLSP 1984 W).
1975 – opens the new IPUT headquarters, orientated North-East-South, in Geneva, CH.
1975-1979 – the preparation of the Five-Year Plan.
1977– establishes a subsidiary institution of IPUT, the Near-East-European Free University for the Jobless of Western Europe (departments: Ast.ronomy, Rock&Roll and St.Rike), where, due to the deliberate waste production of telescopes by the astronomy industry, he launches the St.Reik Macht Frei!-program at the St.rike Department, which is declared R’n’R by the Ast.ronomy Department, and this is how it eventually settles in the public opinion of the world.
1979-1984 – as a result of a heterarchical transcendence of the Evolutionist and Creationist Myth Circles, in order to catalyse the Free Will Vestige, The Mutant, The Mutant Class, and The 24th Canton are realised.
1989-1990 – as an honorary member of the International Flat Earth Society, he makes a journey around the Earth that lasts for exactly one year.
1991 – following the coup d’état of 1989 in Hungary, he resettles from the Fatherland to the Motherland, where, from the Near-East-European Homogeneous Office, he superintends the post-1984 phases of Myth Correction.
1996 – presents the Katabasis Soteriologike, an extension of the research of Anatomic Immortality in the Grotesque Centres: the peripheral Mucsarnok/Kunsthalle (Budapest) and at the central Musée Rath (Geneva).
2001 – opens the Neo Socialist.-Realist. IPUT Global Counter-Art-Hist.ory-Falsifiers‘ Front, and publishes the NETRAF Manifesto.
2003 – as a correction of art-history-falsification, establishes the Portable Intelligence Increase Museum, and organises the first grassroots, Direct Democratic referendum on the issue of joining the Neutral Weapon Free Near-East-European Fluxus Green Zone (NEWNEEFLUGREEZ).
1991 – 2012 lectures at the Intermedia Crèche of the Hungarian University of Fine Arts (Anatomic Immortality – or the difference between the Catholic M. Duchamp and the Protestant G. Brecht = St.Rike like Sabbath, and Wei Wu Wei, that is, Dormant Land).