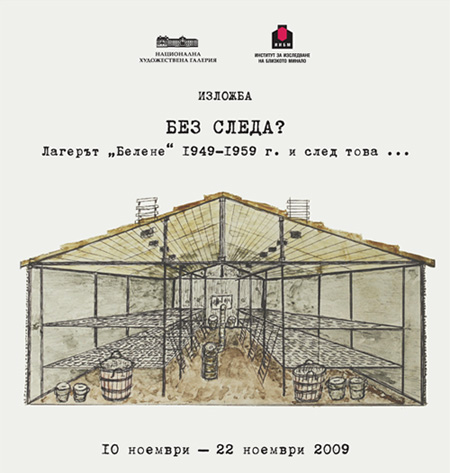 Materials from and about Petko Ogoyski and his collection on the forced labour camp were included in the exhibition of the Institute for Research of the Recent Past and the Bulgarian National Art Gallery (BNAG) “Without a Trace? The Camp Belene 1949-1959 and After All This Timе…” The exhibition took place in the BNAG from 10 to 22 November 2009 and was organized with the support of CEE Trust and the Open Society Institute - Sofia. The launch of the exhibition catalogue by Ivaylo Znepolski attracted public attention and the event and the book provoked a wide debate on the character of the state socialist regime in Bulgaria.

The exhibition displays the history of the forced labour camps in Bulgaria, with a particular focus on the forced labour camp on Belene. This camp operated officially from 1949 to 1959, though a break in deportations to Belene occurred in between 1954 and 1956. Political opponents of the socialist state were imprisoned also in 1981, while between 1985 and 1989 Turks and Bulgarians, who resisted the policy of changing Turkish names and surnames to Bulgarian, were imprisoned on Belene.

Both the exhibition and the publication are case studies of the repressive climate in socialist Bulgaria in this time, primarily through selected objects of the imprisoned persons, such as as the shoulder-belt made by Petko Ogoyski for the hard schlep-work, the wooden shoe with a secret hiding-place for medicine and a small pencil and others, maps of the labour camp, drawn by former prisoner and drawings etc. Among the written remnants of the time, poems, writings, and readings of the prisoner and other documents were also highlighted.

The exhibition and the catalogue Bez sleda. Lagerat Belene 1949-1959 i sled tova [“Without a Trace? The Camp Belene 1949-1959 and After...”] reconstruct the repressive nature of the state socialism in Bulgaria, also showing forms of resistance.