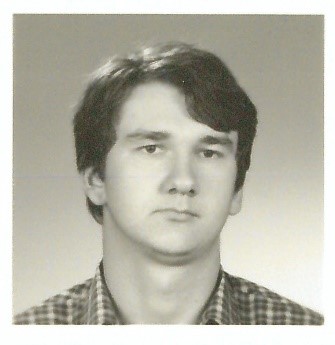 Pavel Kocman was born on October 25th, 1968 in Hustopeče. He spent his childhood in southern Moravia in Valtice and Břeclav, where he attended grammar school. In 1987 he was accepted to study of history and archival studies at the Faculty of Arts at UJEP in Brno. At the time of the outbreak of the strike in November 1989, he joined the Strike Committee at the Faculty of Arts, UJEP. Initially, he put posters on the walls, but soon prof. Zdeněka Rusínová contacted him. She knew he was studying archival studies, and suggested that he start organising the documents, posters and all of the other artefacts that were on a pile in the Strike Committee.  Doing that he set the foundations for the current collection. This collection he later arranged with other students: Darja Golková (later married Kocábová), Renáta Brožová (later married Růžičková) and Ivo Durec. After completing his studies in 1993, he was employed as an archivist in the district archive, worked at the Czech Television and at the Jewish Museum. The history of the Jews in Moravia eventually became his main theme of interest, which he has dedicated himself to since. He also teaches this subject at the Faculty of Arts of Masaryk University, and the Faculty of Arts at Charles University in Prague.