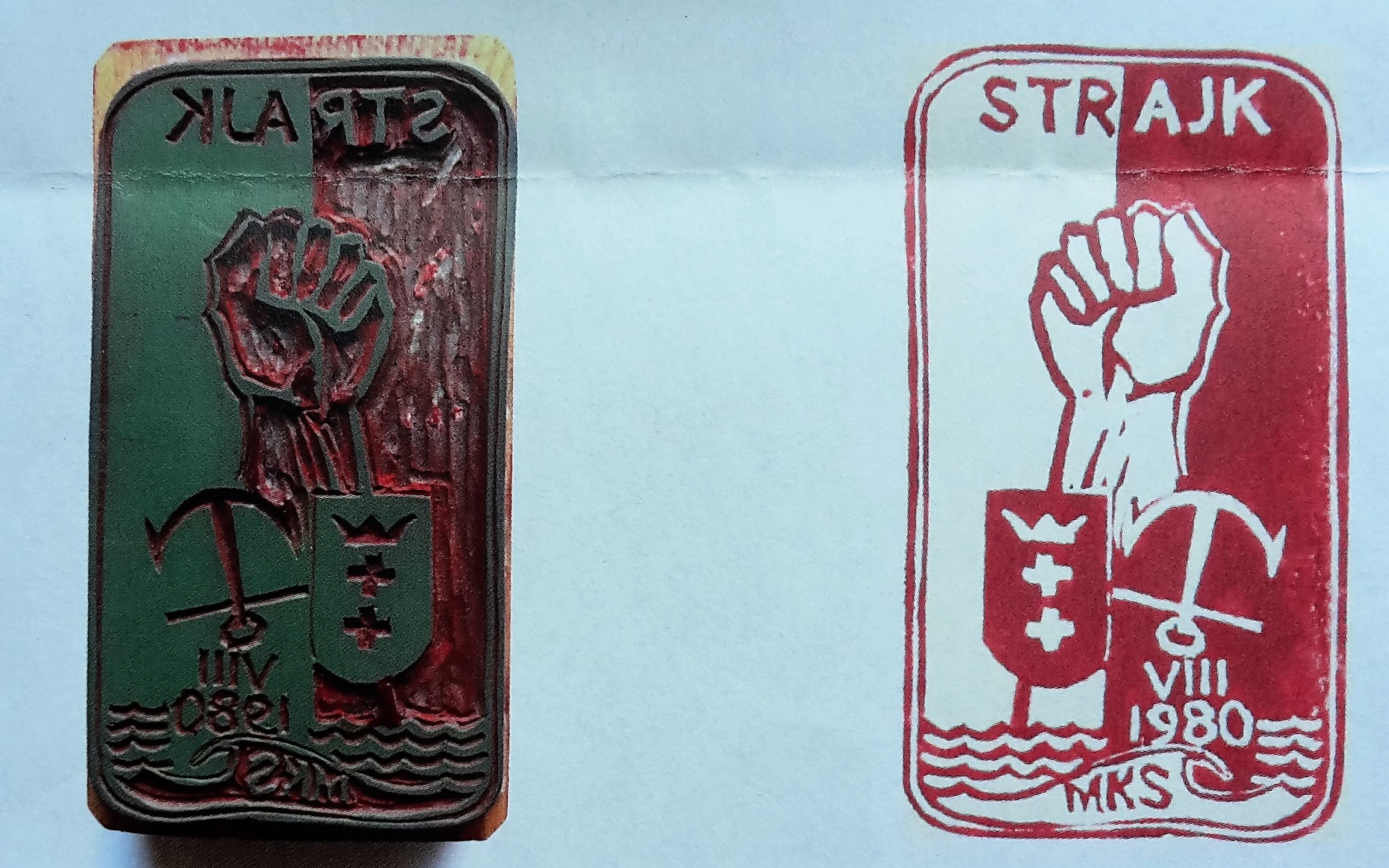 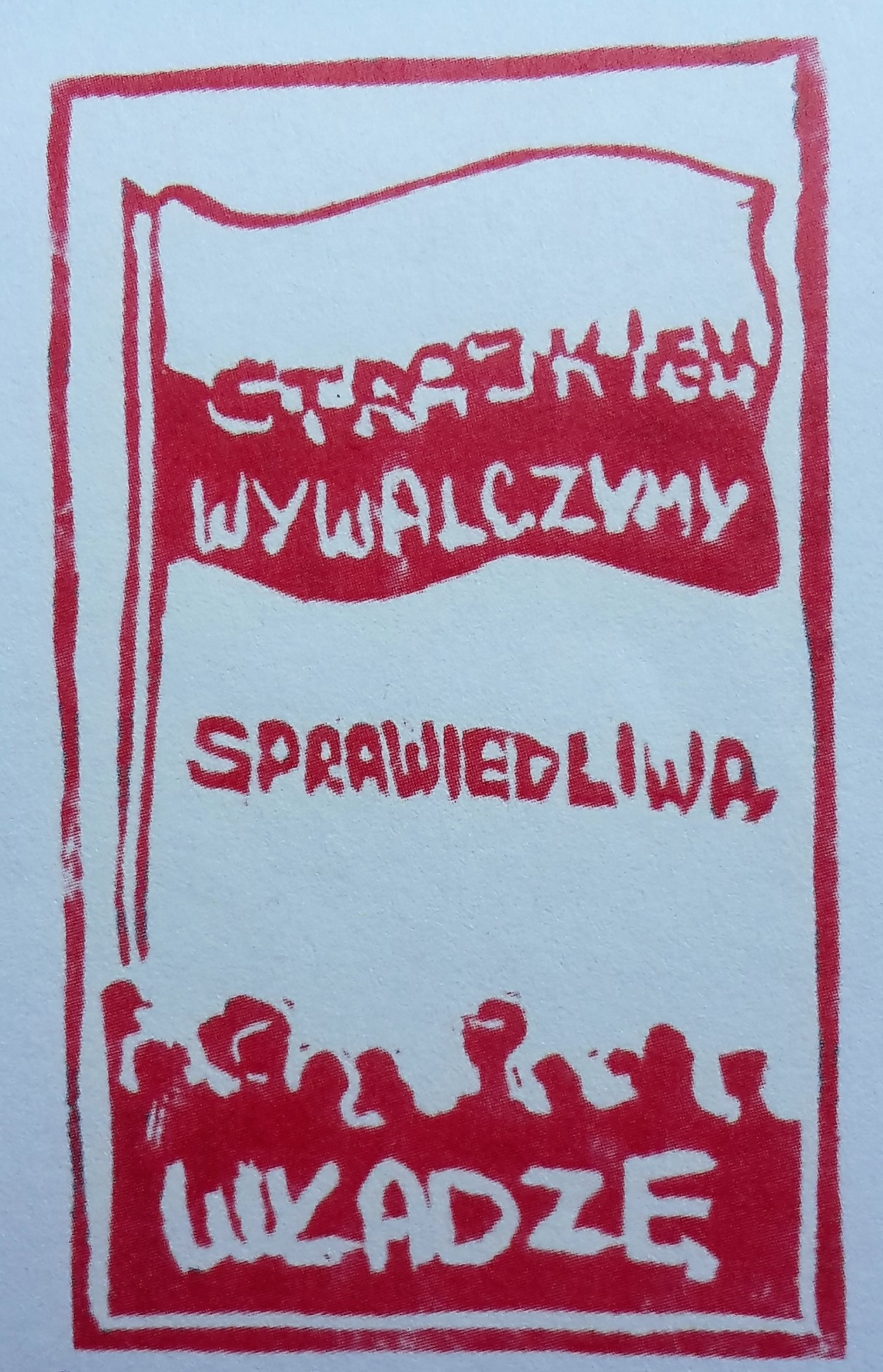 The seals and stamps created by Józef Figiela are an interesting visual representation of the strikes in the Gdansk Shipyard of the August 1980. They are also a testimony of an incredible engagement and effort put in sharing the strike’s ideals by a person who used his artistic abilities for this purpose, as well as a talent and enthusiasm of his teenage daughter.

Józef Figiela is both a sailor and an artist by profession, and he has alternately practiced both of them throughout the 1960s and 1970s. In August 1980 he had already been signed in for another cruise when the strike in the Gdansk Shipyard broke. His ship was stuck in the harbour and he used this opportunity to support the protesters. He became a member of the Inter-Factory Strike Committee as a delegate of the Association of the Polish Fine Artists of the Gdansk Region, and as a graphic artist he joined the fight for changes. On 20 August 1980 he created his first seal of the strike’s underground post. It shows a hand clenched into a fist (symbolising the fight), Gdansk’s coat of arms, and some nautical motifs (an anchor, sea waves), as well as a sign: “strike”. The original linocut is a part of the collection of Michał Guć, who is also in the possession of the authentic copies in the form of stamps on the envelopes.

The seals in the form of stamps were copied in the Polish national colours onto the envelopes and specially prepared postcards. During the strikes, Figiela prepared 4 linocuts, which as copies were disseminated among the strikers. Figiela’s seals stand out from other underground stamps with their precise execution and interesting graphic design. However, their content is quite typical for this type of philatelist: it refers to the Polish patriotic emblems, fight symbols, and the shipyard itself. There are also some religious (Catholic) motifs.

It is worth mentioning that with his activity Figiela inspired to action his daughter Dąbrówka, who as a just 15-year-old girl created her own seal, as well as she helped her father in creating copies. Every day Dąbrówka would cut out the postcards and glue on them the official state stamps, and in the evenings she would go to the post office, asking the workers to mark the papers with tomorrow’s date. Next, her father and her pressed their seals onto the envelopes, and the next day Figiela took them to the shipyard and shared them among the strikers. Thus, the materials have always had the current date.

The last seal Figiela created just before the end of the strike. It shows the Polish flag and a hand holding some flowers – it symbolised the peacefulness of the protests. The text says: “victory”.

Michał Guć estimates that altogether there were around 300-400 paper copies of Józef and Dąbrówka Figiela’s stamps disseminated in August 1980.  It is a relatively small number which was caused by the fact that making copies was a very time-consuming activity and that only two people were involved in their production. Low number of existing stamps makes every original copy a valuable item.