Letter from the National Patriotic Front to Radio Free Europe/Radio Liberty, 1971 (in Russian) 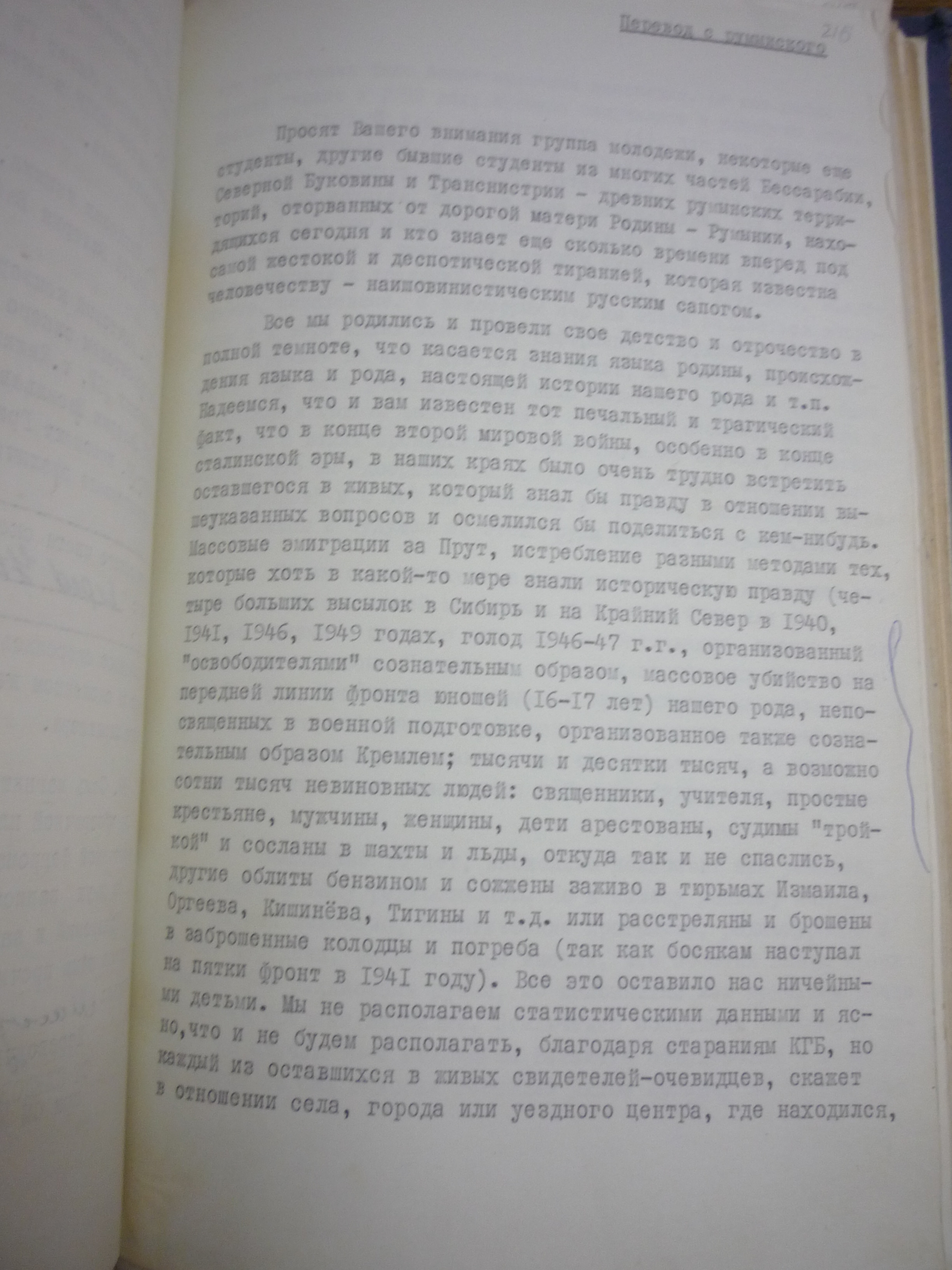 This document is a copy of a memorandum written by Gheorghe Ghimpu at the end of 1971 and addressed to Radio Free Europe / Radio Liberty. This thirteen-page typed text is part of volume 10 of the Usatiuc–Ghimpu–Graur file stored at the SIS Archive . The version preserved in this archive represents a literal Russian translation of a handwritten Romanian-language document. The Romanian version was copied by Valeriu Graur from the initial typed draft of the memorandum authored by Gheorghe Ghimpu. The handwritten Romanian text, confiscated from Graur’s apartment, constituted one of the main pieces of evidence during the trial. This text was to be smuggled by Graur to Romania and subsequently sent to the RFE/RL headquarters in Munich (by clandestine means), but Graur’s arrest hampered this. The document synthesises the main arguments and views of the members of the National Patriotic Front. The text begins by deploring the fate of the “ancient Romanian lands” of Bessarabia, Northern Bukovina and Transnistria under the “most cruel and despotic tyranny” of the Soviet regime. This regime is accused of “chauvinism” and of large-scale repressive policies in the post-war period. The author acknowledges that during the 1960s the situation had improved and that the Moldavian population had more opportunities to receive a better education. However, the MSSR’s position within the USSR is described as that of a “colony of the Russian Empire” (the anti-imperialist rhetoric is pervasive). The document then presents and purports to analyse various strategies used by the Soviet regime to Russify and “de-nationalise” the local Romanian-speaking population. Aside from mentioning the isolation of the USSR Romanians from Romania proper and the attempt to create a separate linguistically based Moldavian national identity, the author points to several other concrete manifestations of the Russification policy, e.g.: 1) the attempt to further assimilate the local population by appointing to leading and managerial positions Russian speakers or Russified Moldavians, who were in reaction labelled ”outsiders” (venetici) or Russian collaborators, and who consolidated the colonial relationship between Soviet Moldavia and the Russian centre; 2) the ”expulsion” of the Romanians to Siberia’s ”virgin lands” and their replacement by a wave of Slavic migrants, 3) compulsory service in the Soviet army; 4) the encouragement of mixed marriages; 5) the ubiquitous use of Russian as a state language (despite the provisions of the Soviet Constitution) and the marginalisation of Romanian; 6) the Russification of education at all levels; 7) the purposeful Russification of proper names (both family names and geographic locations). The author further argues that the Romanian population has not accepted the policies of the “Russian colonisers,” and invokes a number of individual examples of resistance, mainly from intellectual circles. Although stating that the “struggle will continue,” the text concludes on a rather pessimistic note, emphasising that the Romanians of the MSSR are isolated and ignored by the wider world due to the Russification policies pursued by the regime. The dominant nationalistic language and overtones, which are probably inspired from the interwar rhetoric specific to Greater Romania, make this document one of the most eloquent examples of Moldovan national opposition in the Soviet period. The attention given to the cultural sphere is especially revealing. It is worth mentioning that Graur reconstructed a version of this document from memory, so it was thus able finally to reach its destination ten years later, in 1982, when it was broadcast by Radio Free Europe.