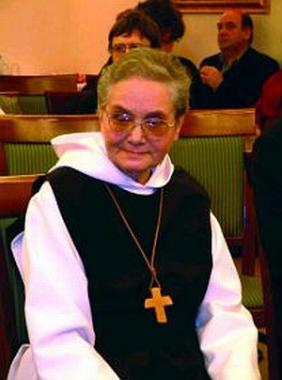 Ágnes Tímár (1928) is a Hungarian Cistercian abbess. She born in Újpest. In July 1944, her father, György Tímár, who was a member of Pál Demény’s communist group, was arrested. The orphan girl was raised by the Piarist monk, Ödön Lénárd, who educated her. She graduated from the Girl’s Gymnasium of the Loreto Sisters in Budapest She then studied architecture at the Technical University. She joined the Cistercian Order in 1948, but after the dissolution of the order (1950), she had to leave the Regina Mundi Monastery in Nagyesztergár. In 1953, Tímár was made an architect at the bearing factory of the IPARTERV company in Diósd. In 1955, she started to organize a Cistercian community (now located in Kismaros) with youngsters who joined her. In 1961, she was arrested along with her three sisters. They were freed in 1963 in accordance with the general amnesty. On 19 April 1966, Tímár was imprisoned again, because she allegedly had “planned a conspiracy.” She was released in in 1968, and she then organized the Cistercian monastery of the Blessed Mother of God in Kismaros. She studied theology, and her doctoral treatise was accepted by the Institute Catholique in Paris, but she was only able to travel to France to defend her doctorate in 1989. After that, she became the first Hungarian nun to hold a Doctor of Theology. In 1993, she became the abbess of the monastery in Kismaros. She resigned from this position in 2003 because she turned 75.