Performance One Day in the Life of Ignac Golob, 1977. Press clipping 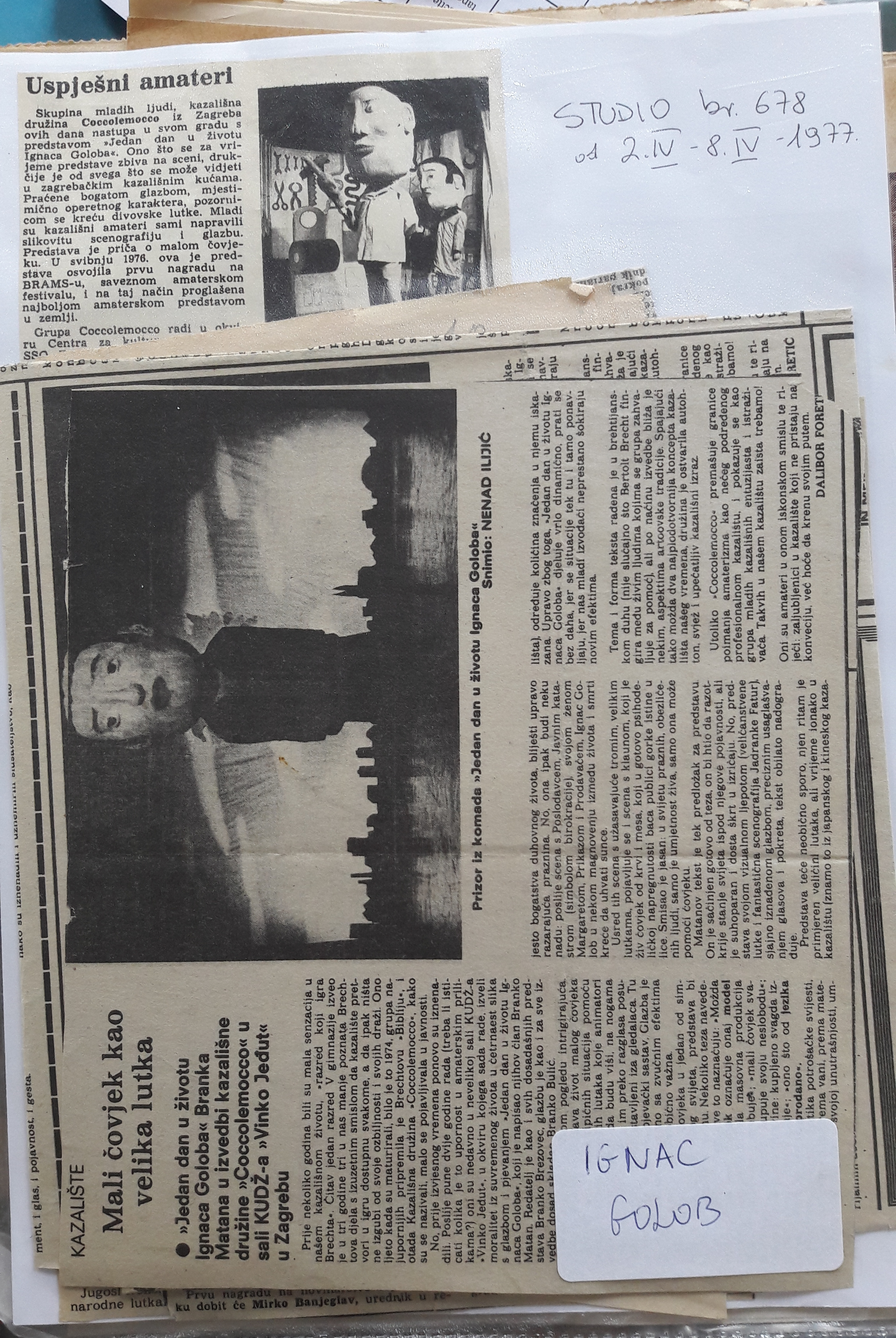 After a three year long rehearsal period, the performance One Day in the Life of Ignac Golob by the theatre company Coccolemocco premiered in 1977. Preparations for the performance took so long, among other things, due to problems with the rehearsal space, which was finally found in the premises of the Society of Amateurs in Culture and Arts Vinko Jeđut. 25 people participated in the show, most of them from the Faculty of Humanities and Social Sciences. Branko Matan wrote the libretto, Branko Brezovec was in charge of the direction, Tihomir Milovac made the props, Božo Kovačević provided the voice for Ignac, while Mladen Blaić provided the voices for other puppets. The main backbone of the performance were gigantic three-meter tall puppets, designed and made by Jadranka Fatur.

The performance follows the life of a factory worker, Ignac Golob, through a series of images from his everyday life: Ignac at Work, Ignac at Home, Ignac in a Shop, Ignac and the Sun, ... and finally Ignac and Death. The text by Branko Matan was subtitled "morality play on contemporary life," and engages in a dialogue with the book by Wilhelm Reich, Listen, Little Man! The theme of the "little man", unconsciously concealed in all of us, signifies "that model of ‘non-freedom’ which is the only one still needed by the crazed mass production of consumption" (cited from the program booklet), both in capitalism and socialism. Socialism failed to deal with the contradictions and deceptions of banality of everyday life before which the "little man" Ignac Golob, a factory worker, is helpless and ineffective, but primarily lacks responsibility. His diagnosis of the world is "Let it be what needs to be!"

The performance questions the idealized image of Yugoslav socialist society and through the portrait of the "little man" Ignac Golob and its co-responsibility for the social conditions of the society he lives in, it comes to the diagnosis spoken up by an actor on stage: “(...) if an individual lets the world come out of him, then nobody has a chance anymore.” The performance talks about the responsibility of the little man for “the death of all our languages”.

Gordana Vnuk cut the newspaper articles about the show and stored them in her collection, along with the program booklet, tickets for the show, and other documentation related to One Day in the Life of Ignac Golob.