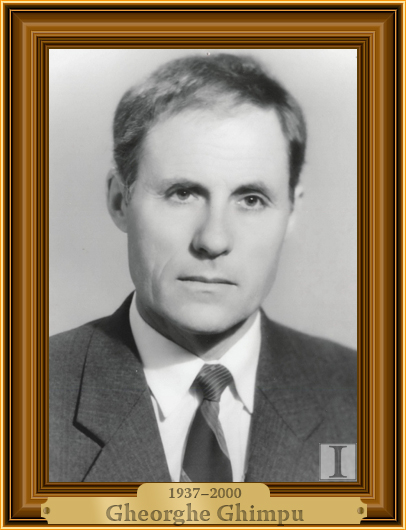 Ghimpu, Gheorghe (b. 26 July 1937, Colonița village, now Chișinău; d. 13 November 2000, Chișinău) was an outstanding member of the National Patriotic Front and the main ideologue of the movement. He produced or co-wrote most of the group’s programmatic documents. He studied at the Tiraspol Pedagogical Institute, graduating in 1960 from the Faculty of Physics and Mathematics. Subsequently, he worked as a schoolteacher in Strășeni district and as a university instructor in Tiraspol and Chișinău. He also worked as a minor official within the Communist Youth League (Komsomol). At least from the mid-1960s, he began to openly display his oppositional and nationalist views, which earned him several reprimands and ultimately cost him his job in the Komsomol. In 1970 he was admitted to the doctoral programme of the Institute for Biological Phisycs of the USSR Academy of Sciences in Moscow. However, he was expelled for ideological reasons in November 1971. Under the impact of the Prague Spring and the subsequent events in Eastern Europe, he founded the National Patriotic Front together with Alexandru Usatiuc. He later insisted on the spurious claim that this organisation had existed in the MSSR since the late 1940s and that it was merely “revived” in the late 1960s. He was arrested in January 1972 and sentenced to six years in a high-security labour correction colony. After his return to Chisinau, he was barred from engaging in any public activity and from teaching. He resumed his involvement in politics after 1989, being one of the founders of the Moldovan Popular Front. He was a member of Moldova’s first democratically elected Parliament between 1990 and 1994. In a highly charged symbolic gesture, he was allowed to install the Romanian flag (tricolour) on the Parliament building on 27 April 1990, thus consecrating the first act of symbolic rupture with the Soviet past. He remained actively involved in politics until his death in November 2000 as a result of injuries suffered in a car accident. He was the only member of the group who became a practising politician after 1989.