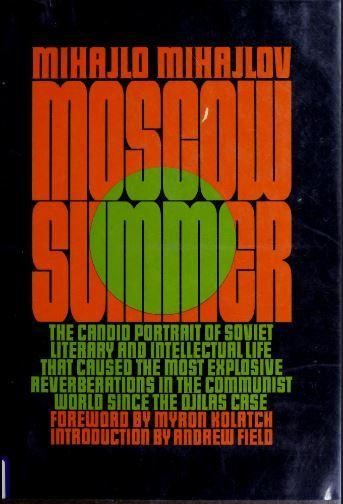 The manuscript of Mihajlov's travels, “Moscow Summer,” written in English is in the box 28. The text was the fruit of Mihajlov's visit to the Soviet Union in the summer months of 1964. Mihajlov supported Nikita Khrushchev's reforms and the program of de-Stalinisation, and he criticized the changes in the Soviet leadership after Kruschev’s fall. This criticism alarmed those in charge of Yugoslavia’s foreign policy, since it could once more undermine Soviet-Yugoslav relations, which had normalized in the mid-1950s.

Referring to the publication of the first two essays of this book, Tito himself called out Mihajlov in February 1965 as a result of pressure from the Soviet ambassador due to his criticism of the new political course following the fall of Khrushchev in the autumn of 1964. Despite censorship of Mihajlov’s essays in Yugoslavia, American politicians and the public were interested in Mihajlov's case precisely because of his stance on the Soviet Union during the political upheavals in the upper echelons of the Soviet party in those years.