Graphics for an invitation card 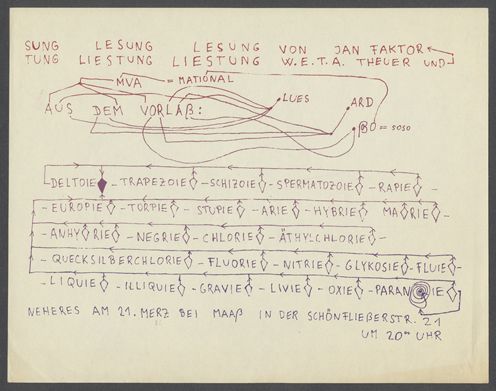 Privately organized apartment, studio or courtyard readings offered many authors belonging to the independent literary scene in the GDR the only opportunity to appear and present their texts publicly or in larger groups, as well as to receive feedback from peers. Frequently, the invitations to such events were highly detailed and artistically decorated. Several dozen such invitations, including those to readings of Peter Brasch or Christa Moog are part of the Jan-Faktor-Archive. The invitation shown here is to a reading of Jan Faktor and Werner Theuer in the poetry studio of Wilfriede and Eckehard Maaß, one of the first and most important transregional ‘reading rooms’ of the alternative milieu of East Berlin.