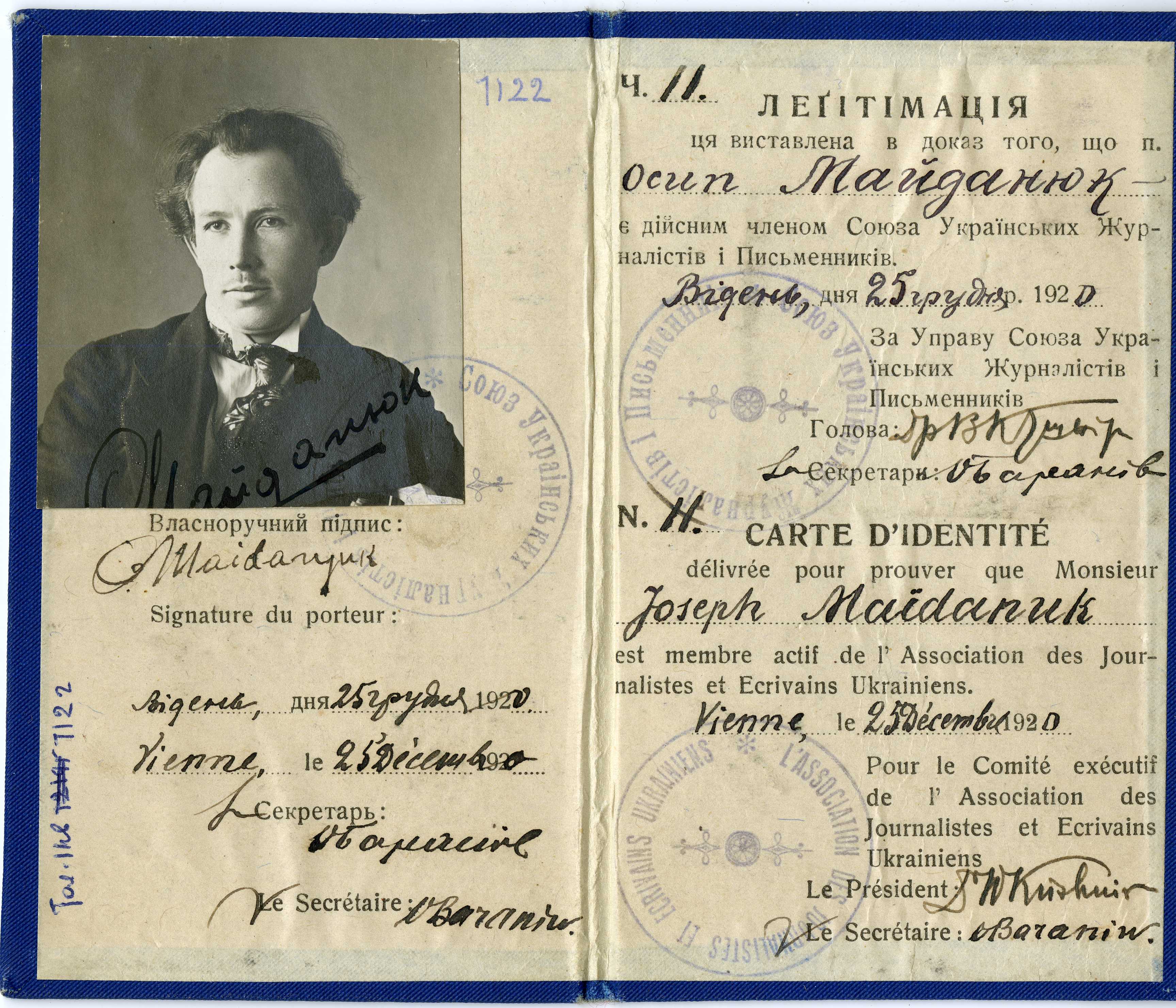 Osyp Maidaniuk was an artist born in the city of Kamianets-Podilskyi in 1886. He was trained in several academies, mainly in Kyiv and Odessa, before teaching the art of painting and history of art at the Academy of Lemberg (Lwów, and now Lviv) before the First World War. According to a letter written by his wife Elsa, he was imprisoned by the Russians during WWI and was on his way to Murmansk, before being liberated by Swedes in Finland. Maidaniuk moved to Stockholm, where he later was appointed secretary of the Ukrainian legation, which was also responsible for relations with Norway and Finland following the Ukrainian People's Republic's declaration of independence in 1918. The following year Maidaniuk resigned in order to return to working as an artist. Nonetheless, with the sum of of money he received upon his resignation, he opened a Ukrainian information bureau in Stockholm.

After his death in 1961, Elsa Maidaniuk sent the bulk of his personal archive and library to the Ukrainian Museum-Archives in Cleveland, due to their connection to Evhen Batchinsky. Amounting to nearly 1,000 items, Maidaniuk's collection consists of many Ukrainian language books published in the years 1917-1921, as well as books in other languages from that same time. She also sent journals, several maps, and photographs. Among the later were 13 pictures of injured soldiers on the way to Ukraine from Finland, who crossed through Sweden in 1918. She also sent 74 postcards and 20 negatives of Maidaniuk's original works. The documents include his diplomatic passport issued by the Ukrainian People's Republic (UNR), various visas issued to him while carrying out his duties as secretary of the Ukrainian ligation in Stockholm.

These papers were part of a larger transfer of documentation from former UNR diplomats and government representatives to archives in North America, in particular to the Ukrainian Museum-Archives in Cleveland. Despite the transfer of the Evhen Batchinksky papers to Carleton University in Canada, the UMA retains quite a bit of documentation from this period, thanks to the Maidaniuk papers and other materials that were not transferred to Carleton in the 1970s. This documentation shows very early and committed opposition to communism, in particular to the Bolshevik Revolution. Alongside other political visions articulated during the collapse of the Russian Empire in 1917, representatives of the Ukrainian People's Republic declared independence for Ukraine and worked hard to establish diplomatic relations during the liminal period between the collapse of empire and the establishment of the Soviet Union in 1922. These documents provide an important window into the roots of cultural opposition to communism in Ukraine, highlighting nettlesome issues that remain unresolved to this day.