A conclusion on the basis of a report submitted by the Commission for the Examination of Nationalist Phenomena in the Emigrant Foundation of Croatia, 1967 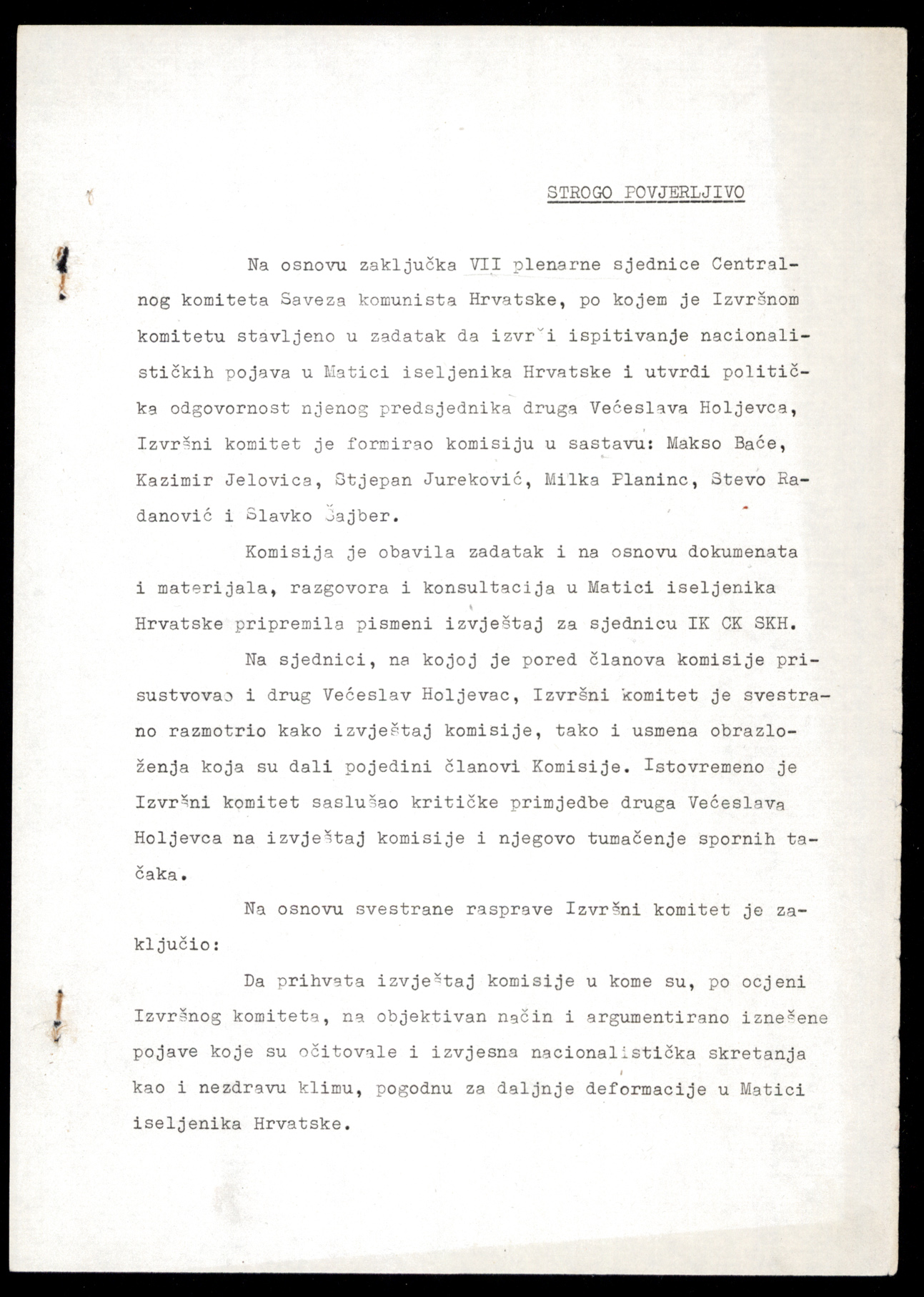 This is a document containing a conclusion based on investigative actions pertaining to the alleged emergence of nationalism in the Emigrant Foundation of Croatia (EFC) from 1964 to 1967, i.e. during the term of Većeslav Holjevac as its president. The Commission has identified incidents that "have manifested a certain nationalistic turn as well as an unhealthy climate, suitable for further deformities in the Emigrant Foundation of Croatia-" Holjevac was held the most responsible for this, because of "deeper ideological and political misconceptions about the national issue he is considering outside of the class and social context." Henceforth, Holjevac was forced to resign from membership in the Central Committee of the League of Communists of Croatia (CC LCC), and consequently from the post of president of the EFC. As a concrete fault, the document specifies: the shortcomings of the proposed EFC Charter due to the one-sided orientation on emigrants exclusively of Croatian nationality, then the mitigation of the characterization of two emigrant organizations - the "Croatian Academy" in New York and the "American-Croatian Academic Club" in Cleveland (from those hostile to Yugoslavia, to neutral, cultural organizations) in materials prepared by Secretary I. Marinković. Holjevac was also accused of hesitating to condemn the Declaration on the Status and Name of the Croatian Literary Language and its signatories, the lack of a reception and non-attendance on Republic Day in 1966, the singing of Croatian songs on New Year’s Eve ("Heavenly Maiden, Queen of the Croats," "Arise, banus"). The accusations included an appeal for help from emigrants during the flood in Zagreb in 1964, because it was addressed to "Croatian emigrants and other Yugoslav citizens on temporary work abroad," as well as putting Franjo Tuđman, Zvonimir Komarica and Ivo Frangeš on the list for the Main Committee (MC) of the EFC, and the rationale for signing a letter of solidarity with Ljudevit Jonke after the official condemnation of the aforementioned Declaration.

Holjevac was additionally found guilty of political aberrations on the nationalist viewpoint because of his disagreement with such assessments and for "ignoring his political responsibility." The Commission therefore instructed the convening of the EFC Extraordinary Assembly because of the changes in the MC and the definition of the EFC’s orientation "in accordance with the policies of our society."

This document is a very clear example of repressive action taken by the CC LCC, i.e., one of its bodies, in terms of cultural policy. Conduct beyond the established ideological line was not allowed and was quickly dealt with, and those involved were punished by the loss of their status in society, functions and often employment, and were placed under surveillance.

By 1995, the document was, along with the other records of socio-political organisations, a part of the Archives of the Institute of History of the Labour Movement of Croatia/Institute of Contemporary History. That year, in July, it was handed over to the Croatian State Archives (CSA), where it is kept today. The documents are accessible for use without any restrictions.