The first religious exhibition in 1980 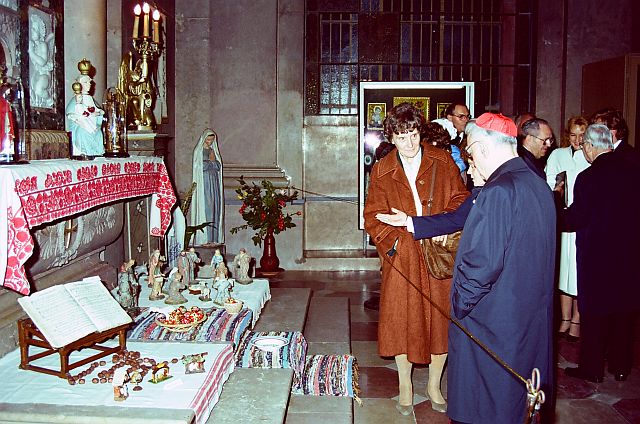 Between 7 December 1980 and 6 January 1981, an exhibition was organized which was based on the objects in the folk religious collection in Esztergom. It was placed in the Esztergom Basilica, more precisely around the Holy Cross altar.

After the call issued on 6 January 1980, many objects were donated to the collection, so the exhibition could draw on 6,000 objects given by 240 donors. Icons, carvings, primers, chaplets, statues, embroideries, and religious manuscripts were put on exhibit as testimony to vibrant spiritual life. The purpose of the exhibition was dual: the organizers wanted to demonstrate the importance of religious objects, which were extraordinary in the communist period, and they also wanted to answer a question of raised by the churchgoing public: “What shall we send?” Zsuzsanna Erdélyi and László Lékai emphasized that they were open to every object which had something in connection with the subjective, the local, the folk, and official religious life.

The exhibition was a well-organized event which drew masses of visitors and also included showings by actors, actresses, and opera singers (Katalin Gombos, Anikó Rohonyi, Imre Sinkovits, Gábor Németh, András Vitai) and an organist (István Baróti). After their performance, excerpts of holy legends were read, and the event came to a close with meditation.

The exhibition was successful because many other objects were offered. On the other hand, the organizers faced the problem of how to deal with the names of the givers, how they could present the religious objects, and how they could help collect the artifacts.

Thanks to the exhibition, the collection grew continuously, and by 1985, it had doubled in size.