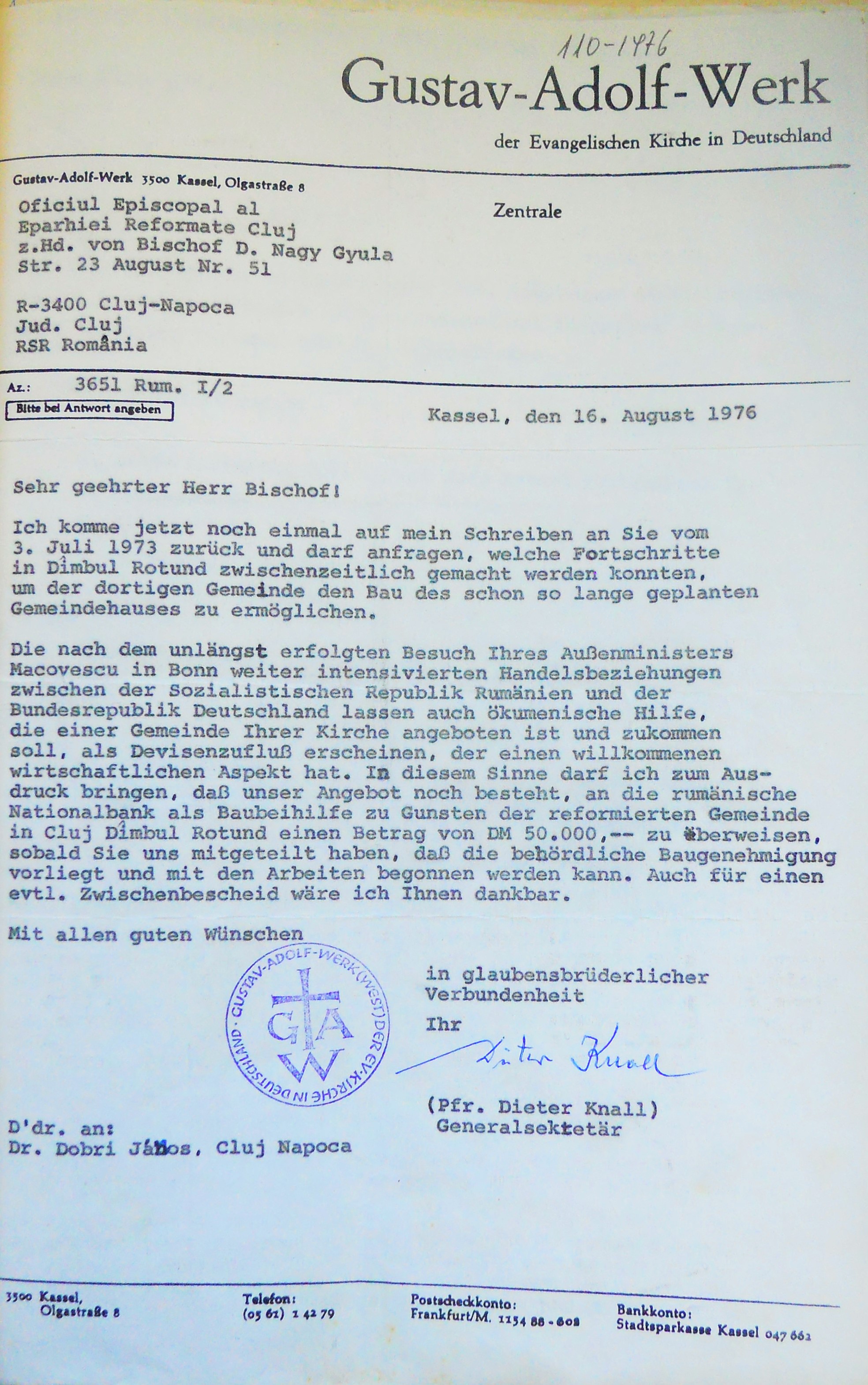 According to documents in the Reformed Congregation of Cluj–Dâmbul Rotund's Collection, on 13 March 1971 the West German foundation Gustav-Adolf-Werk offered a donation of 50,000 deutschmarks as ecumenical help for church construction (KKREL 1971/7, Report no. 28). This turned out to be of major importance in the process of constructing the church building. The fact that the state could benefit from foreign currency on the construction site counted as a very strong argument and played a huge role in the history of the reluctantly issued building permit. Between 1971 and 1976 there existed mostly only correspondence between the foundation and the pastor of Dâmbul Rotund, János Dobri on the question of when they would take over this sum of money, with the parish having to answer that they had not yet obtained approval for it. In the communist regime, any donation in money or of a different nature coming from abroad could be accepted and taken over only with "religious affairs departmental" permission from Bucharest. Regulation no. 16455/1971 of the Department of Religious Affairs (Departamentul Cultelor), referring to Decree-Law No. 334/1971 paragraph 5 point “r”, stated that gifts and bequests given or accepted by clerical organisations could be made only with the approval of the Department of Religious Affairs. Furthermore, any inventory objects, with or without historical or artistic value, books, manuscripts, musical instruments, money, material, or producs, regardless of their value could only be donated or accepted with the prior approval of the Department of Religious Affairs (KKREL 1971/7, Rescript no. 1420). Eventually, in addition to approving the construction of the church building, the Department granted permission for the use of the donation. According to the knowledge of Reformed pastor András Dobri and cantor Anna Jankó, only the first half of the amount was transferred officially to the Romanian National Bank, while the other half was transmitted through other "gates." In those times foreign exchange was not permitted for Romanian citizens living in the country. Only foreigners could change foreign currency and thus deliver the donated money. As the exchange rate was very unfavourable, those concerned decided to change the foreign currency with the willing help of Polish tourists. The greater amount obtained this way could be used properly during the construction. Because of the large amount involved, almost all members of the presbytery, which was then made up of about twenty-eight members took a part of it, which they then offered as donations in their own names for the church construction. In fact, based on oral history interviews, the possibility is not to be excluded that the second part of the West German donation was transferred officially in a similar way to the first, while the church members were used to collect other foreign cash donations, as the Gustav-Adolf-Werk donation was not enough on its own to pay for the construction (statement of Anna Jankó; statement of András Dobri).

The Securitate materials on János Dobri also give information about the donation. Based on the documents contained in the informative file, on 5 March 1971 Reformed Bishop Gyula Nagy was informed in a letter from the West German donor – through Pastor-Secretary General Dieter Knall – that the sum of money destined for the church construction in Dâmbul Rotund had been prepared, and he was asked to accept the donation in the name of the Reformed Church District of Cluj. A positive response was preceded by the consent of the Department of Religious Affairs in Bucharest (ACNSAS, 211500/4, 147). Since August 1972 the counter-intelligence in Cluj led by Colonel Sándor Peres had dealt specially with the case. When the Securitate learned that a considerable sum had been allocated by the Gustav-Adolf-Werk foundation for church construction, Peres had stated that in order to receive the money, the Church officials would have to talk with the county religious affairs inspector, "studying the possible modes of coordination." This statement is significant especially in the light of a later declaration of the county religious affairs inspector Hoinărescu Țepeș Horia, according to which no Hungarian churches or chapels were to be built in Cluj as long as he held that position in the city. (ACNSAS, I211500/5, 152–153). The later actions involved in the church construction prove the success of the "coordination," bearing in mind the interests of the single-party state.