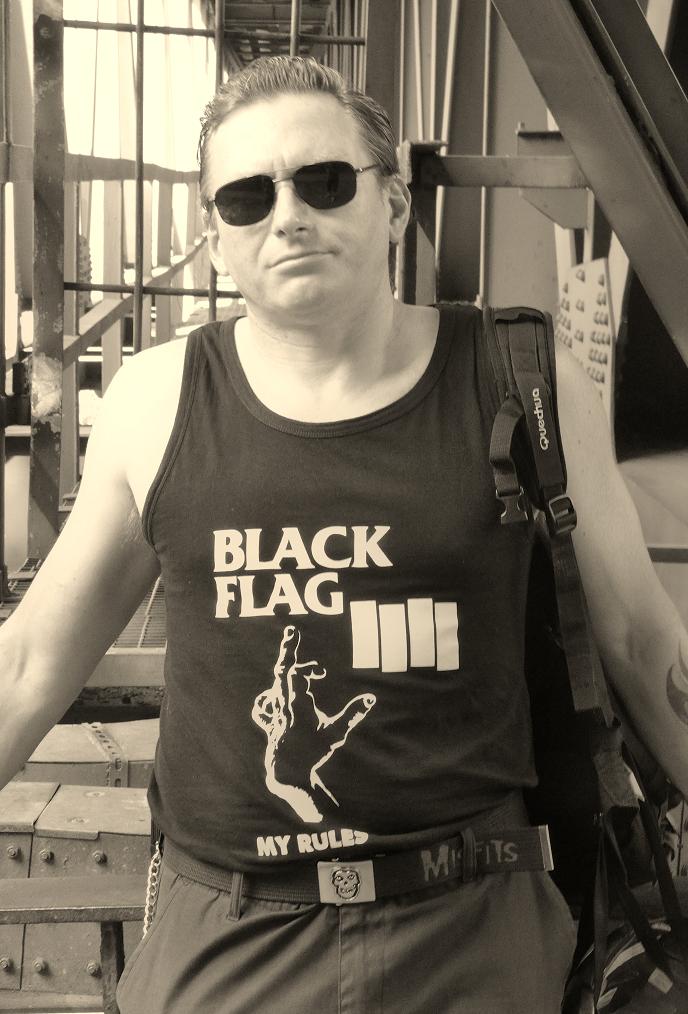 Piotr ‘Pietia’ Wierzbicki (1963) was one of the first fanzine publishers in Polish People’s Republic. Wierzbicki's parents were a typical middle-class intelligentsia with higher education in humanities. The father worked in the state industry companies while the mother was an editor in public TV. Such social background was common in the beginning of the punk movement. Especially the leaders of the movement were mostly artistic bohemians, young poets, writers, actors from the relatively privileged families while "usual" listeners of the punk music represented also other social classes.

Although fanzines like ‘Szmata’, ‘Papiery Białych Wulkanów’, ‘Zjadacz Radia’, ‘Gangrena’, or ‘Azotox’ were prior to the ‘QQRYQ’ issued by Wierzbicki from 1985, their ephemeral character and limited scope stood in contrast with popularity, impact and transnational connections of ‘QQRYQ’. Wierzbicki was inspired by some of them, but his aim was to publish a fanzine similar to the Western ‘Fallout’, ‘Toxic Waste’, and ‘Maximum Rock’n’ Roll’. First attempts were made in 1984 when he created small, one-page papers with collages, stuck in Żoliborz district in Warsaw. Then he launched ‘QQRYQ’. The first and the second issues of ‘QQRYQ’ were still insignificant experiments but the third issue came as a regular fanzine with 50 copies distributed in Poland and abroad. Soon ‘QQRYQ’, along with ‘Antena Krzyku’ from Wroclaw, became one of the most influential hardcore punk magazines in Poland in 1980s. Wierzbicki, its editor, publisher and the author of the majority of the content, gained a position of prominent music critic and promoter associated with band Dezerter and Trybuna Brudu. In the late 1980s he started issuing cassettes.

In the beginning of the transition to liberal democracy Wierzbicki decided to legalize his enterprise and established the QQRYQ Productions. However, in 1993 the last issue of ‘QQRYQ’ was printed because of a small audience for such magazine. During the 1990s Wierzbicki has carried on publishing the cassettes; till the end of the business in 1999 QQRYQ Productions issued almost one hundred cassettes. Meanwhile, Wierzbicki was Dezerter’s road manager and a DJ playing punk and reggae music in Warsaw clubs. He also used to have his programs on alternative radio stations. Nowadays Wierzbicki works as a city guide in Warsaw, but sometimes he still plays music on club parties.

As a publisher of ‘QQRYQ’ and important person on the local punk scene, Wierzbicki gathered an essential archive of Polish punk fanzines and cassettes. He also collected photographs and other documentations, as well as non-punk third circuit press, e.g. art zines and anarchist papers. After 1989 he regularly loaned items from his collection for exhibitions and publications about punk scene and the alternative culture in Poland. He talked about these phenomena in many interviews in radio stations and newspapers and up to present time has willingly participated in discussions and presentations about music underground in Polish People’s Republic.

Wierzbicki presented a strong anti-communist attitude and used to laugh at those punk musicians who, like Tomasz Lipiński from Tilt band, gladly performed on official festivals and published their albums in music companies owned by the socialist state. He was from the beginning interested in creating and strengthening the underground scene without any support from the official music industry. That anti-government and a bit anarchist viewpoint situated Wierzbicki on the map of the cultural opposition. But he was far from engaging in politics in any form. Even though he collaborated with anarchists and pacifists in the alternative culture events and social networks, he highlighted his interest in the autonomy of the punk scene and the third circuit, not in fighting or reforming the socialist regime.