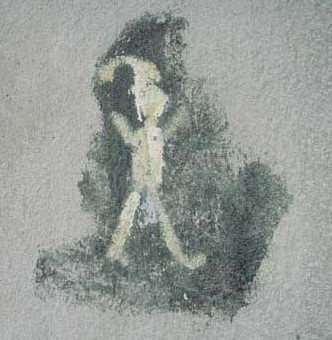 Waldemar Fydrych painted first dwarfs on the walls in late August 1982 in Wrocław together with Wiesław Cupała. According to the dialectic theory of “tactical painting” invented by Fydrych if an anti-governmental slogan was a thesis, and the spot left after it had been painted over was an antithesis, than the image of a dwarf appearing on the spot would be a synthesis. Throughout a year, over a thousand dwarfs were painted, vast majority of them manually, using a paintbrush, by “Major” Fydrych and his companions. Images of dwarfs would appear on walls also in later period, and until today they invariably continue to appear in Fydrych’s paintings.

The historical dwarf was painted on a spot left after the symbol of the Fighting Solidarity (a combination of leters “S” and “W”) on the wall of the building in the Madalińskiego street in Warsaw, where Fydrych temporarily lived. The graffiti comes from a very early period, from before the happenings of the Orange Alternative. Although there are thousands of photographs and films documenting the happenings, there is just one original dwarf graffiti surviving until today. In 2016 “Major” created several copies of this piece; some of them were sent to galleries in Poland, i.a. to the National Museum in Warsaw, and abroad.