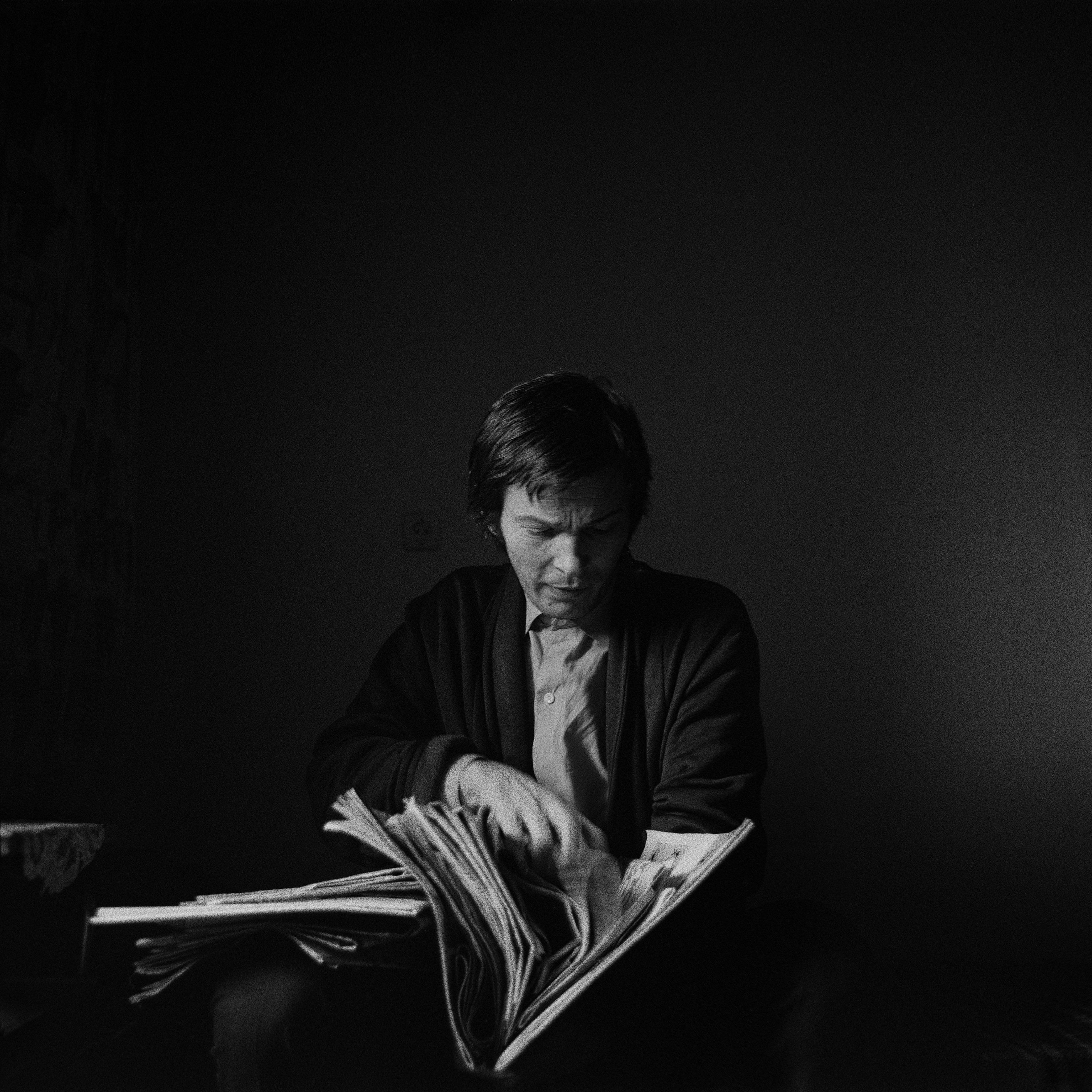 Jerzy Ludwiński (1930) was born in Zakrzówka in the Lubelszczyzna region. He was a critic and an art theoretician, a curator of numerous exhibitions, an academic teacher, and a visionary whose concept still inspires artists and researchers. His intellectual and organisational activity, especially during the time he spent in Wroclaw in 1966-1975, greatly influenced the development of the Polish conceptualism and neo-avant-garde. Ludwiński died in Toruń in 2000, where he had lived since 1975.

In 1955 Ludwiński graduated from art history at the Catholic University of Lublin. Two years later he was one of the founders of the Lublin’s group Zamek; he also became an editor of the “Structures” (an addition to the “Kamena” magazine), at the same time cooperating with other press issues and actively participating in various artistic events. In 1966 he co-organised the Artists’ and Scientists’ Symposium “Art in the changing world” in the Nitrogen Plants in Puławy – with the participation of local engineers. It proved to be a breakthrough event, both for Ludwiński, who started to sketch his main ideas, and for the whole conceptualism in Poland.

The same year Ludwiński moved to Wroclaw where he presented the idea of the Current Art Museum – an institution which would analyse and document currents artistic facts; being art’s “sensitive seismograph” and its catalyser. The extension of this concept was the idea of a “game’s museum”, which was led by an artist, critic (and curator), and the audience, enabling all parties to negotiate the meanings of created works. Under Mona Lisa Gallery – as the modest gallery in the International Press and Books’ Club’s (IPBC) hall was informally named – was an attempt to materialise those ideas with the limited funding and exposition possibilities. Gallery was ran by Maria Bierny, a head of whole IPBC, but Ludwiński was its curator between 1967-1971, and thanks to his activity the institution was of an extremely authorial character. It provoked authentic, not routinized, discussion about contemporary art. Every exhibition was preceded by the dialogue of an artist and a curator, published in the “Odra” magazine, and finished with a public debate. One of the most important exhibitions in the Under Mona Lisa Gallery was the Terminology art in 1970 – an exposition in a form of text and documentation from the outdoor workshop in Osieki from the same year. It was in Osieki where Ludwiński presented his famous paper Post-artistic art (published later under a slightly changed name Art in a post-artistic epoch), which described the following phases of art evolution; both those form the past (from an object to space) and those that were yet to come. The ending point was specified as dispersion, and merging of the art and reality. Ludwiński predicted that the eagerness to dematerialise art, to exchange a work of art with the “creative process” and action, will lead to a gradual penetration of art in into the spheres of everyday life, science, and technology.

Also in 1970, in Wroclaw, one of the most important events of the Polish conceptualism took place: the Wroclaw ’70 Fine Arts Symposium, organised to commemorate the 25th anniversary of joining the Recovered and Northern Territories to Poland – but in fact it was an excuse to gather tens of the Polish conceptual and neo-avant-garde artists. Ludwiński was an important member of the Symposium Organising Committee. During the event he presented his vision of the Artistic Research Centre (ARC), describing it as an institution both of research nature, and at the same time stimulating art development (as a substitute for ARC may be seen the Art Documentation Centre, founded in 1972 and closed just a year later). In 1971 Ludwiński also managed to organise (together with Antoni Dzieduszycki and Jan Chwałczyk) an outdoor workshop Ziemia Zgorzelecka “Art and science in the process of protecting human natural environment”. It was an expression of ecological consciousness of the conceptual artists and theoreticians. However, the same year Ludwińki resigned from running the Under Mona Lisa Gallery, which was an effect of a conflict with the IPBC’s authorities.

After moving to Torun in 1975 Ludwiński started to run a gallery Punkt (in 1976-1978). He still took part in the artistic life, visiting various exhibitions, symposiums, and outdoor workshops. It is worth mentioning i.e. the International Meetings of Artists, Scientists, and Art Theoreticians in Osieki or the biennale Golden Bunch in Zielona Gora. Since 1982 he tought in the State Higher School for Fine Arts in Poznan, and for the rest of his life he concentrated on the didactics. He was a member of the Polish section of the International Association of Art Critics AICA and a persistent promoter of art in the press, radio, and television.

Ludwiński strongly contributed to shifting the attention from an artistic object to the „artistic process”; he sought a dialogue of the artists, critics, curators, and audience, aiming to democratise and decentralise the art world. He opposed the exclusiveness of art and the pomp that accompanies it; he provoked confrontations and polemic. Ludwiński has never written a whole book (there are only articles, notes, diagrams, and papers), as he was rather a man of a spoken word, of discussion and dialogue. However, his influence on the changes in art of the 1960s and the 1970s is invaluable. His somewhat hippie lifestyle and staying in the peripheries of the art field (little, independent galleries, reviving the creative circles in Lublin, Wroclaw, Torun), definitely made him a person standing out from mainstream. His importance is not even diminished by the fact that he cooperated with the security services, what he explained with the desire to explain them the complex processes within art evolution. In the article Performative mythology. About Jerzy Ludwiński’s curatorial strategies Piotr Lisowski underlined Ludwiński’s thought radicalism and his prophetic attitude: “His work practice has always been characterised by ephemerality and a specific kind of nomadism. It was largely determined by the critic’s biography and myth: a vagabond in jeans, hitchhiking from a symposium to symposium, from a reading to a reading, who found important talking about art”. Play, processual thinking, dialoguing, blurring borders, nomadism, and a visionary attitude made Ludwiński an unusual figure, standing out from easy labelling and interpretation schemes.