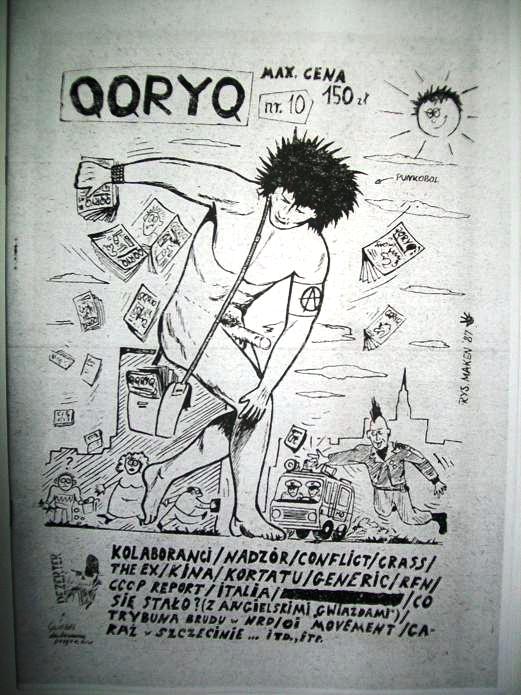 The majority of the editions of ‘QQRYQ’ was printed on Xerox from one hundred to two hundred copies. The matrices were made by hand, in a collage technique, from scraps of official newspapers and magazines, small text lines prepared on typewriter, hand written articles, photos, graphics, and comics. The first issue published on the offset appeared in 1990. It was also the first issue prepared with a usage of a computer. Against this background of Xerox and offset techniques of printing, the tenth edition of ‘QQRYQ’ seems to be very original. This edition was published by screen print, which was hardly ever practiced as a way of bringing out punk fanzines. The screen printing technique was extremely labour-intensive and took a lot of time to print even a relatively small number of copies. Another unusual fact about the tenth number of ‘QQRYQ’ was a usage of the official foolscap because of lack of different kinds of paper. The content of the issue did not vary so much from the rest of the editions, but worth mentioning were the graphics by Mirosław ‘Maken’ Dzięciołowski, reggae DJ, promoter, and alternative scene activist in the late 1980s in Poland. Dzięciołowski was one of a few regular contributors of ‘QQRYQ’.