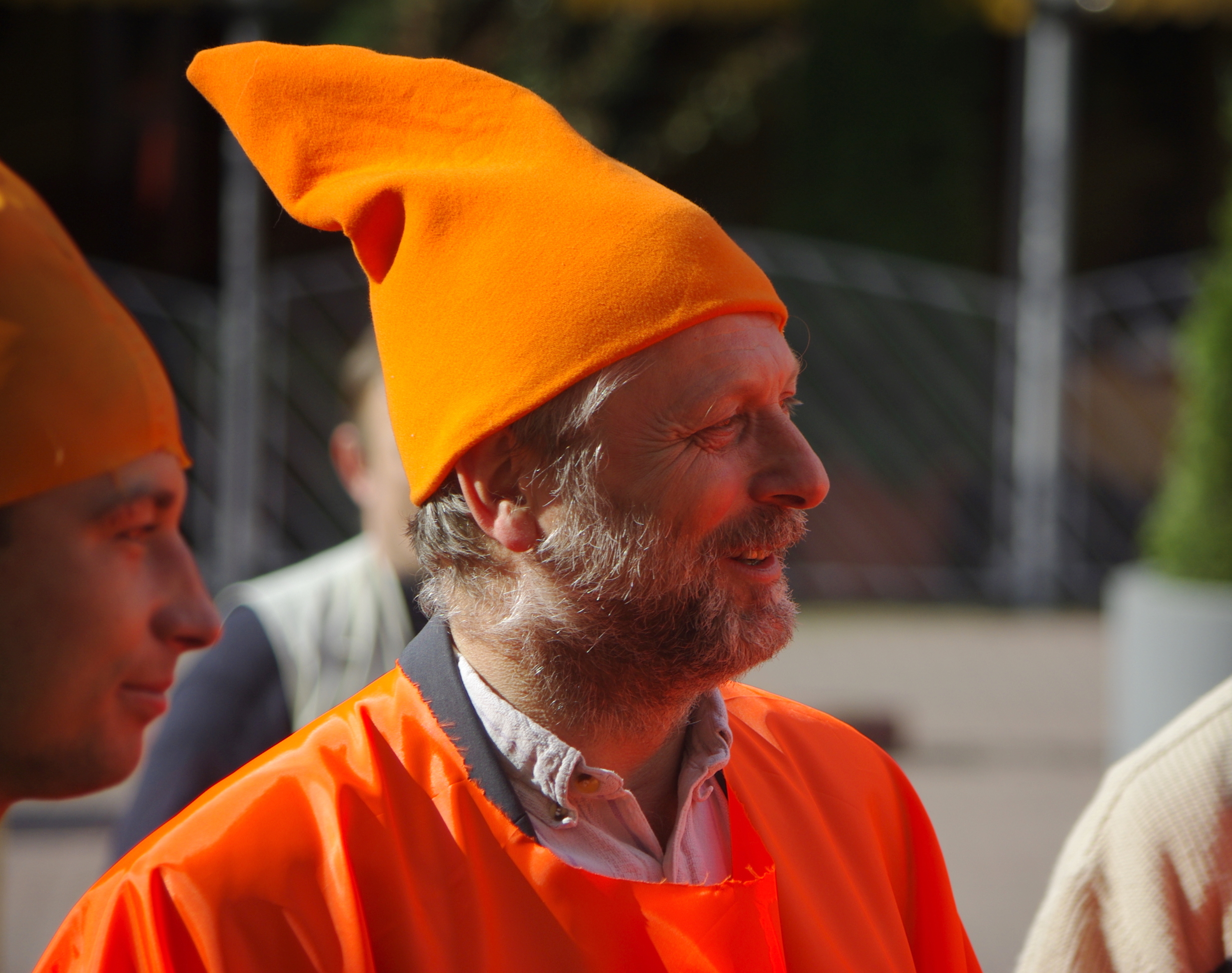 Born in 1953, originating from petite bourgeoisie of Toruń, Waldemar Fydrych is one of the co-founders of the New Culture Movement, the author of the Manifesto of Socialist Surrealism, and the leader of the Orange Alternative. Fydrych, graduate of history and history of arts, organised happenings, painted, authored several books, and eventually created the Museum of Orange Alternative.

Fydrych was one of the principal creators, leaders, and theoreticians of alternative culture in Polish People's Republic. In order to avoid conscription after graduating from sugar production technical school Fydrych decided to study history at the Nicolaus Copernicus University in Toruń. During his studies he developed interest in student comedy shows and avant-garde theatre. After his third year of studies he moved to Bolesław Bierut University in Wrocław, seeking a more diverse and tolerant milieu. There he came across the Open Theatre Festival (Festiwal Teatru Otwartego), took part in an internship at Jerzy Grotowski's Laboratory Institute, and most importantly joined the hippie movement, dynamic at that time in Wrocław. After the death of Stanisław Pyjas in 1977 he became engaged in the activities of the local Student Committee of Solidarity. Along with history, he took up history of arts studies. The intellectual capital accumulated throughout the prolonged education period enabled Fydrych to overcome his humble origins – his father was a tailor and mother a telephone operator – and ascend to a position of a leader of a radical students’ movement and a performative artist.

In 1980 Fydrych, already known as “Major”, registered together with his friends the New Culture Movement, a student organisation constituting an alternative for the Socialist Association of Students of Poland (Socjalistyczne Zrzeszenie Studentów Polskich) and the Independent Students’ Association (Niezależne Zrzeszenie Studentów). Also in 1980 Fydrych published the Manifesto of Socialist Surrealism. In autumn 1981 he participated in student strikes earning the position of the leader of the radical, anarchistic faction. During martial law Fydrych cultivated “tactical painting”, i.e. painting dwarfs over spots left after removing anti-government slogans. He also converted to Buddhism. In 1986 he resumed artistic performances and starting from the spring of 1987 proceeded to organise street happenings that combined elements of folklore, theatre, music, and parades. In 1988 Fydrych received the Prize of Solidarity’s Independent Culture Committee (Nagroda Komitetu Kultury Niezależnej) while the anti-governmental Kontakt magazine characterised him as “opposition's celebrity”. In spring of the same year he was arrested for two months, only to be released after three weeks, under the pressure from intellectuals, as well as youth and student activists. After unsuccessfully running in senate elections of 1989, and in the light of radical political changes, “Major” decided to emigrate to France, where he earned a living with physical labour (i.a. as a decorator) while enjoying the air of a dissident and an opposition artist.

From the very beginning of his activities, which combined arts and social activism, Fydrych documented the happenings by collecting newspapers, leaflets, posters, and photographs. As early as 1989, together with Bohdan Dobosz he published the first book dedicated to the movement: Hokus Pokus czyli Pomarańczowa Alternatywa. In 2001 Fydrych published individually Żywoty Mężów Pomarańczowych, and in 2006 Krasnoludki i gamonie – a book dedicated to his emigration period. In 2008, with Bronisław Misztal Fydrych published an album titled Pomarańczowa Alternatywa. Rewolucja krasnoludków and finally, in 2013, an autobiography titled Major. In the 2000s several expositions documenting the Orange Alternative were organised (i.a. in 2005 in the European Parliament in Brussels, in 2011 at Centre 59 Rivoli Gallery in Paris, and at the International Cultural Centre in Cracow), as well as individual workshops; in both cases the majority of exhibits belonged to Fydrych’s private collection, which were later passed on to the Orange Alternative Foundation. “Major” is the initiator, the author of the concept, and the main creator of the Museum of the Orange Alternative. The first version of the Museum was completed in 2009 and the second in 2011.