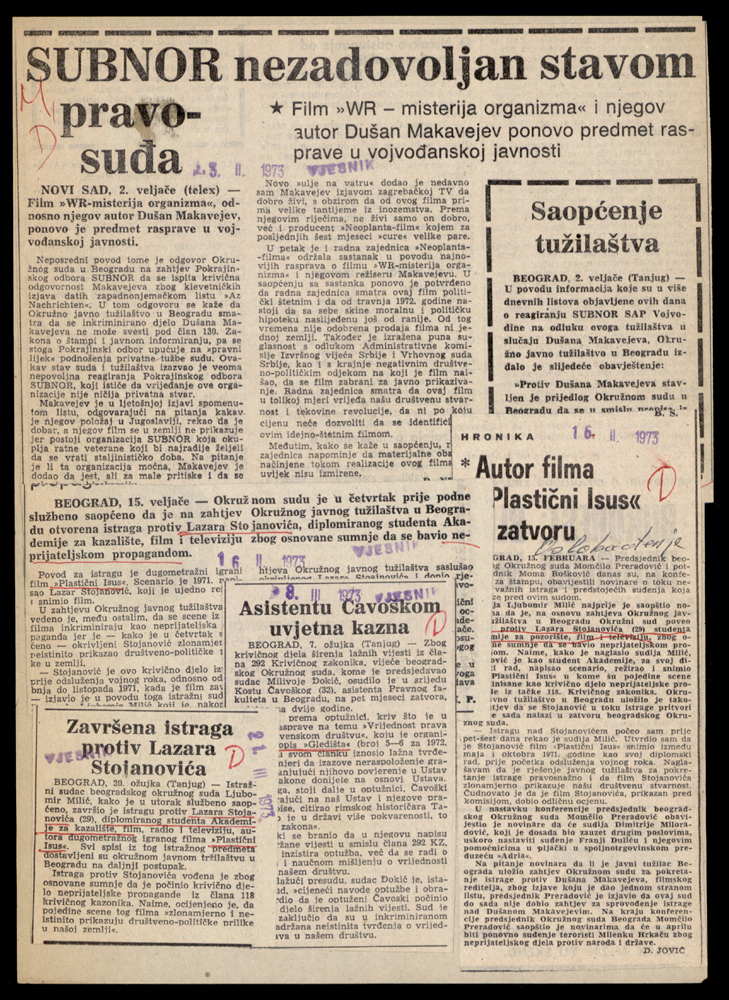 The card contains five cut and glued press clippings containing reports on court trials against Dušan Makavejev, the director and producer of the film “W.R.: Mysteries of the Organism”, against Lazar Stojanović, the director and producer of the film “Plastic Jesus”, and against Kosta Čavoški, then an assistant professor at Faculty of Law in Belgrade, sentenced to five months in prison with a two-year suspended sentence, on charges of criticism of the 1971 Yugoslav constitutional amendments.

The film “W.R.: Mysteries of the Organism” from 1971 was banned in the SFRY for 15 years, although it won many awards abroad (Interfilm, international criticism in Berlin, Luis Buñuel Award in Cannes). As further described in the Miroslav Krleža Institute of Lexicography's film lexicon, Makavejev among other things ironically thematized the rigidity of the communist regime, i.e. the conservatism of supposedly advanced socialist societies. The main character Milena, a young Yugoslav communist, also represents feminist attitudes in relation to psychoanalysis and Marxism, while the film’s structure in general relies mostly on the experience of the so-called historical, especially the Soviet, avant-garde.

The film “Plastic Jesus”, directed by Lazar Stojanović, was made in that same year. The film was banned, locked away, and first shown in 1990. Its author was sentenced to prison. Besides its erotic content, the film was banned primarily because of its open criticism of Tito's cult of personality and the Yugoslav regime. This film led to  Stojanović’s as inclusion among the directors of the so-called Black Wave, a Yugoslav film movement of the 1960s and early 1970s. It was characterized by criticism of contemporary socialist society, ideology and government and their public presentation, and by realism in the presentation of everyday life versus the official socialist cultural statism which represented reality through the prism of the overall progress and prosperity of Yugoslav socialist society.

Besides those described above, the collection also includes approximately fifty press clippings from the period 1972-1974 that are thematically linked to the crimes of enemy propaganda in artistic production, the crime of production and distribution of pornography, and the crime of impugning the reputation of the state, the highest state officials and institutions. The documents are available for research and copying.