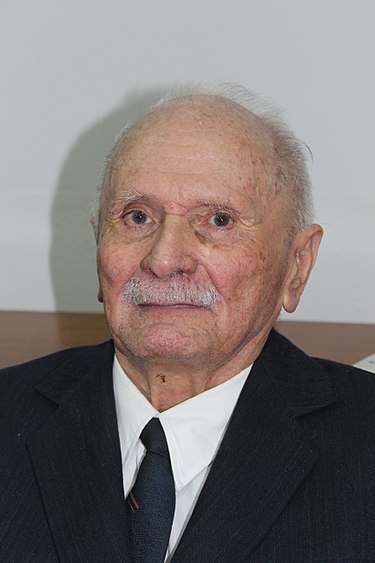 Balázs Sándor (born Cluj, 4 April 1928) is a Transylvanian Hungarian philosopher, university professor, and politician. His father was a railway worker, his mother a seamstress and his only sister was a clerk. He studied philosophy at the Faculty of Letters of Bolyai University, graduating in 1952. In his last year of academic studies, in 1951 he was assigned as an assistant lecturer to the chair of dialectical and historical materialism and a year later he was sent to the A. A. Jdanov Higher School for Social Sciences in Bucharest from which he graduated in 1954. From then on he worked as a university lecturer and maintained his position also after the unification of the two Cluj-based universities in 1959, which resulted in the establishment of Babeș-Bolyai University. He obtained his PhD degree in 1971. As of February 1978 he worked as an associate professor at the chair of philosophy-sociology in the Faculty of History and Philosophy in Cluj. (ACNSAS, I161638/1, 227fv). Beginning in 1945 he became a member of the Union of Communist Youth and in June 1956 a member of the Party. According to his secret police file he received the distinction “in honour of the completion of agricultural collectivisation.” From the early 1970s, he held several low-ranking positions in local Party organisations. Beginning with 1979 he was a member of the board of censors within the University Syndicate Committee. In 1986 he was a propagandist of the Cluj-Napoca Municipal Party Committee (ACNSAS I161638/1, 228).

As of the 1970s he was mainly preoccupied with the Hungarian philosophical-sociological-theoretical literature of the interwar period. He published and wrote the introductory notes to Dimitrie Gusti’s volume entitled A szociológiai monográfia (Sociological Monography, 1976). In his work entitled Szociológiai és nemzetiségi önismeret (Sociological and National Self-Understanding, 1979), he explored the influence of Gusti’s ideas and presented the various Hungarian sociography workshops existing in Romania in the interwar period, such as Erdélyi Múzeum, Korunk, Erdélyi Helikon, Erdélyi Fiatalok, and Hitel. He translated from Romanian and published some works of the philosopher and sociologist Constantin Rădulescu-Motru and of the diplomat Nicolae Titulescu. Alongside his work as a teacher and manifold professional activity, in 1975 he became a member of the board of editors of the daily paper Igazság (Truth) (Statement of Sándor Balázs). His first wife, Kornélia Lőrincz, a teacher, passed away in 1959. They had a daughter born in 1955. In 1960 he remarried; his second wife, neé Rozália Bíró was an associate professor at Babes-Bolyai University, Faculty of History and Philosophy, Chair of Scientific Socialism. He was allowed to travel abroad on a number of occasions. In 1972 he travelled to Italy, in 1974 to France, and in 1978 he visited the German Democratic Republic (ACNSAS I161638/1, 425).

On 15 January 1987, having been authorised by the Party structures, the Cluj-Napoca Securitate started to investigate his case. Two weeks later, On 5 February they opened an informative surveillance file on him under the code name “Sociologul” (The sociologist) and subjected him to close observation. Soon they clarified his activity within the Limes Circle as well as the nature of his relationship with the Cseke family. They intercepted his home phone calls and closely monitored his relationship with Emil Popovics, the Hungarian consul in Cluj-Napoca. Apart from using the informant network and the operative technique, they also resorted to street shadowing. On 2 June 1987 he was summoned for a warning by the first secretary of the Cluj-Napoca Municipal Party Committee, in the presence of the secretary of the University Centre Party Committee, for displaying an unacceptable attitude to “certain things” in the company of “certain persons,” for publishing writings in Hungary without the approval of the Romanian authorities and institutions and for maintaining “undesirable contacts” with foreign citizens. A few days later, on 6 June, Balázs himself made his “self-criticism” also in writing (ACNSAS I161638/1, 390; I161638/2, 166–171). On 9 January 1988, the rector of Babeș-Bolyai University issued another warning to him (ACNSAS I161638/1, 275), accusing him, among other things, of saying ambiguous things during his lectures.

During the Romanian Revolution of 1989 Balázs took an active part in the drawing-up of the call known as Hívó Szó (Calling Word), which declared that the Hungarian community in Romania needed to organise itself. The call was drawn up on 24 December 1989 in the home of the sociologist-philosopher Ernő Gáll. On the following day, 25 December, Balázs was among the gathered members of the Cluj-Napoca Hungarian intellectual elite who agreed, in the editorial office of the daily newspaper Szabadság (Freedom), formerly known as Igazság (Truth), to establish a political organisation (Fodor 2014). His idea was to establish a Hungarian political organisation similar to a party which would participate in elections. In his conception, the civil organisations would have persisted, and the party would not have been concerned with issues such as theatre, newspapers, or education, which would have remained independent. However, in the meantime an agreement was reached between Ion Iliescu and Géza Domokos and the Democratic Alliance of Hungarians in Romania [DAHR – Hungarian: Romániai Magyar Demokrata Szövetség (RMDSZ); Romanian: Uniunea Democratică a Maghiarilor din România (UDMR)]was founded, which was not a party but an alliance that, as an umbrella organisation, became an autocratic entity both in cultural and political representation (Statement of Sándor Balázs). In the 1990s Balázs was a politician representing the DAHR. On 24–25 February 1990 the national assembly of DAHR delegates elected their National Provisional Committee in Sfântu Gheorghe and Sándor Balázs was appointed to one of the vice-president positions of the eleven-member presidency. Between 1990 and 1995 Balázs served as chairman of the Bolyai Society, which to date has among its goals the support and representation of legitimate and well-grounded community needs regarding the creation of an independent Hungarian higher education institutional framework in Romania, including the establishment of a public university. From the change of regime till his retirement and for another ten years he continued to work as a consultant at Babeș-Bolyai University of Cluj-Napoca, specifically as a PhD candidate tutor (Statement of Sándor Balázs). The scientific and public activity of the professor-philosopher exploring the philosophical questions of minority existence is covered to date by his numerous writings. His most recent volume, entitled Emlékeim személyekről – újraközlésekkel (My recollections of persons – with republications) was published in May 2018.