Letter from Nicolae Lupan to Sanda Budiș, in Romanian, 13 October 1984 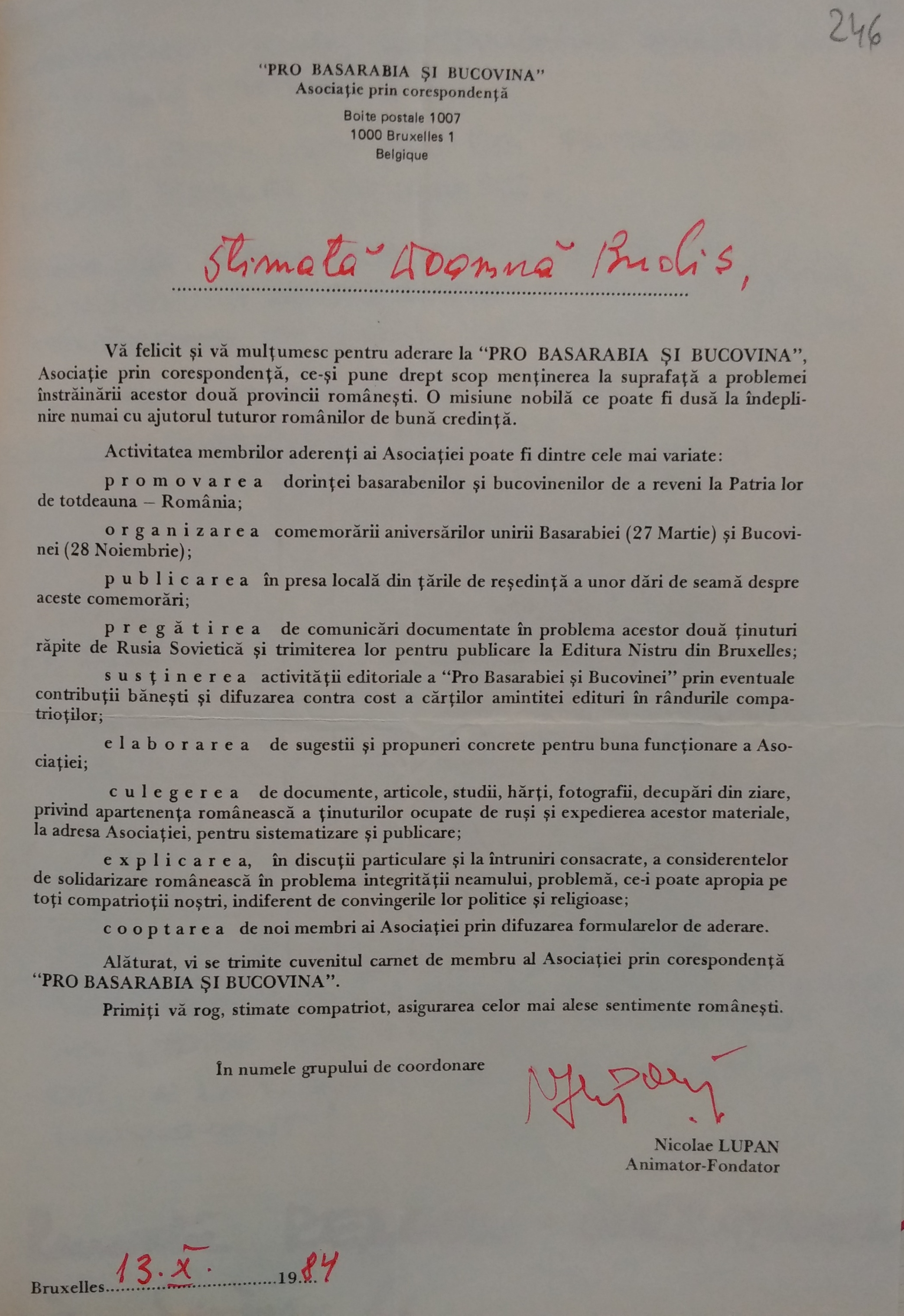 This letter from the Sanda Budiș Collection reflects the way the Romanian exile community acted to preserve, at least among those who emigrated from Romania, the memory of the territories occupied by the USSR, Bessarabia and Bukovina. An example in this respect is represented by the work carried out by Asociaţia Mondială prin Corespondenţă Pro Basarabia şi Bucovina (The World Association by Correspondence Pro Bessarabia and Bukovina). The Association was founded on 1 December 1950 in Paris by the Romanian diplomat Nicolae Dianu. The initial name was the Pro Bessarabia Association, modified on 27 November 1955 to the Pro Bessarabia and Bukovina Association, and from 1975 it became the World Association by Correspondence Pro Bessarabia and Bukovina. In 1955, the headquarters of the Association was moved to Brussels, where the leaflet Pro Basarabia and Bucovina together with a series of volumes about the two Romanian provinces were published by the Nistru Publishing House. Between 1975 and 1989, the Association was coordinated by Nicolae Lupan. Its purpose was, on the one hand, to preserve the memory of Bessarabia and Bukovina among emigrant Romanians. On the other hand, it was designed to attract the attention of politicians and international public opinion to the history of these former Romanian provinces. Many exiled personalities were actively involved in the activity of this Association, including Sanda Budiș, who joined it in 1984. On 13 October 1984, Nicolae Lupan, the president of the Association, sent her a letter, the typed original of which now is preserved in the Sanda Budiș Collection at IICCMER. In this letter, Nicolae Lupan congratulated and thanked her for her desire to join and contribute to the Association. On the same occasion, he sent her a membership card and some advice on how she should act as a member of the Association. She was informed that members’ activity was varied, consisting in: organising the commemoration of the anniversaries of the unions of Bessarabia and Bukovina with Romania (27 March and 28 November, respectively); publishing reports of these commemorations in the local press in their countries of residence; preparation of documented communications on the issue of these two territories annexed by the USSR and their submission for publication by the Association at the Nistru Publishing House in Brussels; supporting the publishing activity of the Association by means of money contributions and distributing its books among Romanians in their countries of residence; the collection of papers, articles, studies, maps, photographs, and newspaper cuttings relating to the Romanian identity of the provinces of Bessarabia and Bukovina with the purpose of centralising them at the Association's headquarters for publishing; explaining, in private and public discussion, the importance of Romanians' solidarity for the integrity of Romania, irrespective of political and religious beliefs; drafting suggestions and proposals on the functioning of the Association; and attracting new members by spreading membership forms.