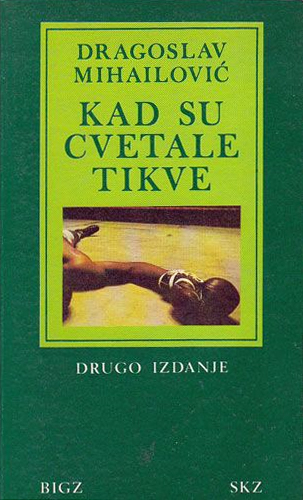 A file belonging to the ‘Ideological trends’ section contains valuable material for the investigation of political pressure and prohibitions in relation to cultural and artistic work in Yugoslavia. The featured item of the collection consists of documents gathered under the heading, ‘Information on the performance “When Pumpkins Blossomed” at the Yugoslav Drama Theatre by Dragoslav Mihailović’ (KPR II-4-a/73), which encompass party material from 1969 relating to the performance. At issue is a play based on the novel of the Serb and Yugoslav writer, Dragoslav Mihailović. The novel appeared one year earlier but did not generate much controversy. However, the inclusion of the play in the programme of the Yugoslav Drama Theatre in Belgrade alarmed the communist party. ‘The novel was not suited for a theatre production, so I rewrote half the text,’ explained Dragoslav Mihailović in an interview with the Večernje Novosti newspaper (Matović 2016). The play’s story of a Belgrade boxer addressed the topic of violence and for the first time publicly broke the silence about the Goli Otok camp and the political and police torture of dissidents in Yugoslavia at that time. Mihailović, who himself had been an inmate of Goli Otok in the beginning of the 1950s, confirmed that ‘I did not mention Goli Otok in the novel. I only mentioned Bakar, which was the last stop for Goli Otok. Later I mentioned it in the play, maybe because when we were developing the performance, it was openly talked about’ (Matović 2016).

The mentioned documents disclose that the intelligence service of the Central Committee of the Serbian League of Communists reacted straight after the first few performances. The record reveals that criticism was directed at the ideological and ethical messages sent by the play; then objection was made to the inacceptable political attitudes professed by the protagonist, ‘that led to doubt in the policies of the SKJ and our country during the period of resistance to Cominform’. Criticism was expressed about ‘the pessimistic conclusions regarding the fate of the human personality in whatever system, and naturally also in this, our own’, while the insertion of sentences that were not in the novel drew special attention, such as: ‘They are worse than the Germans’ (implying the communist authorities), uttered by the protagonist’s father on leaving the prison. The documents show that all this disturbed the City Committee of the League of Communists which called on the organization of the League of Communists of the Yugoslav Drama Theatre to discuss ‘the ideological content of this drama and the political implications that challenge, in the socio-political and cultural life of the city, putting this work on stage’.

Directly following this criticism, the Belgrade press began to attack the play and leading newspapers consequently wrote about it being, ‘a political pamphlet according to the taste of the likes of the Cominform’. Several documents that in fact represent an analysis of the press by the intelligence service of the Central Committee of the Serbian League of Communists, allow us to follow the development of the situation chronologically from day to day, culminating in Tito’s remarks regarding the play. At the congress in Zrenjanin at the end of October 1969, he said, ‘It seems there is something shadowy in the head of the author who in every way attempts to prove that our society is no good. And who says so. That’s written by someone who was at Goli Otok. The number of those who think and talk like that is very small. (...) There are individuals who spit on the accomplishments of our revolution and on the victims who fell in that struggle, but not once have shown that they do not love this country. They do not love this society; they do not love socialism and don’t belong to it with their being. But, once again the same ones are popping up who at the time of the Informbiro [the break from Cominform] revealed who and what they are. We will not undertake administrative measures. I don’t think that arrests are necessary now, but it is the responsibility of the communists to disenable those who deal with such affairs. The voice of our public must be strong and decisive in relation to such incidents’.

Soon after this speech by Tito, the play was removed from the programme of the Yugoslav Drama Theatre. In their analysis about how institutions like the Yugoslav Drama Theatre remember the dark sides of their history, Dragićević Šešić and Stefanović proposed the term “institutional trauma” when referring to “censorship and self-censorship, rejection of creative dissident personalities, etc.” (Dragićević Šešić and Stefanović 2014, 13). They also maintained that “the trauma in Serbian theatrical censorship was linked to the fact that there was no official censorship. That message would be transmitted mostly by telephone to theater managers, and then through a complex procedure the collective "decided" to remove the performance from the stage. Therefore, it was more traumatic than as it would have been in the situation of real state censorship.” (Dragićević Šešić and Stefanović 2014, 19).

Vučetić, Radina 2011. Između avangarde i cenzure. u: Tito i umetnost šezdesetih. u: „Tito - viđenja i tumačenja. Zbornik radova” (ur. Manojlovic-Pintar, Olga) [Between avangarde and censorship. Tito and the arts of the sixties. In: Tito: views and interpretations. Collection of works]. Inst. za Noviju Istoriju Srbije Beograd. INS.