Exhibition: The Life of Comrade Rákosi. 1952 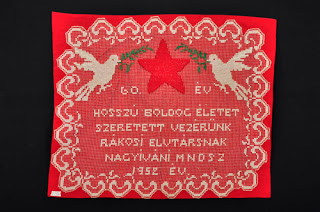 On 9 March 1952, a grandiose exhibition was opened about the life of the communist leader, Mátyás Rákosi.
It was organized on his 60th birthday. The party was held at the Munkásmozgalmi Intézet (Institute of the Labour Movement), in the building that housed the Museum of Ethnography until 2018, and which had previously housed the Supreme Court that sentenced Rákosi to years-long imprisonment in 1937.
The exhibition had two parts: an eight-room presentation of Rákosi’s life, and twenty-five rooms of gifts given to Rákosi. These gifts were extraordinary because they showed the new form of Hungarian folk art, in which folk art symbols were mixed with the symbols of socialism. After the exhibition closed, the objects were not inventoried in the collections of the Museum of Ethnography. The museologist ignored them until the 1960–70s. In 2012, the Museum of Ethnography put the folk-art exhibition of the collection on display under the title Rakosi60@neprajz.hu. Curators worked to ensure that this exhibition presented the original objects in a memorial context to reflect the previous conception; they thought it important to show more interpretations of an exhibition that was surrounded by unspoken rejection.
Here you can find a list of the exhibited objects: http://rakosi60.blogspot.hu/