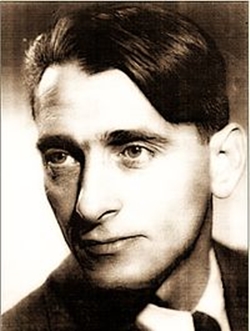 Harry Brauner (b. 24 February 1908, Piatra Neamț – d. 11 March 1988, Bucharest) was a respected sociologist, folklorist, and ethnomusicologist, who underwent the experience of communist prisons. His family of Jewish origin also included other well-known intellectuals: the surrealist painter Victor Brauner and the photographer Teodor Brauner were his brothers. Above all, his professional life was connected to music. A student of the Bucharest Conservatoire between 1925 and 1929, Harry Brauner was appointed in 1928 secretary of the newly founded Folklore Archive of the Society of Composers. In parallel with his activity connected to music, he also attended courses in aesthetics and sociology. The latter had a great influence on his intellectual development and his later career, owing to Professor Dimitrie Gusti, whose lectures he attended. From 1929, he was coopted into one of the multidisciplinary monographic teams for research on Romanian villages initiated and coordinated by Gusti. It was on the occasion of these team research projects that he met Lena Constante, with whom he was to share a destiny marked by much turbulence. In the ten of musical field research, he managed to store, usual special apparatus, recordings of some 5,000 folk melodies.

For a few years after the end of the Second World War, his career was on the ascendant. He became director of the Folklore Archive and department head at the Conservatoire, and founded the Institute of Folklore, where he served as director until 1950. In that year, he was arrested, tried, and sentenced as part of the “Pătrăşcanu batch,” so called after the communist leader Lucreţiu Pătrăşcanu, who was purged in 1948 and after a notorious trial was executed in 1954. Along with him, Lena Constante was also implicated, as, like Harry Brauner, she was very close to the Pătrăşcanu family. In spite of his innocence, on the basis of false testimony forced out of some members of the group, he was sentenced to fifteen years in prison, of which he served twelve. After his release in 1962, he lived for two years in forced domicile in a locality on the Bărăgan plain, an arid and thinly populated region, a sort of Romanian Siberia. In 1964, he married the love of his life, Lena Constante, who had been released from prison in 1962. The way in which Harry Brauner speaks of the traumatic experience that he shared with Lena Constante is moving. From the squalid accommodation in which he lived during his period of house arrest, he wrote the following to her: “Understand that for a long, unspeakably long time I have carried you in my soul, not just as a friend, but as a being who is an integral part of myself. I have lived only in the hope of seeing you again; I have survived only because I wanted to see you at least one more time; I have spent with you the days, the nights, the weeks, the months, the long and far too heavy years; moment by moment I have held your holy icon in my soul… Come, my dear, and bring comfort to my pains; let us be together; let us find each other again, and it will be good beyond all measure” (Nicolau and Huluță 1999). Harry Brauner, together with all those who made up the “Pătrășcanu batch,” was rehabilitated by the communist regime in 1968 and declared innocent.

After prison, he published numerous studies on Romanian folklore and became a key name in Romanian ethnomusicology. About his 1979 book Să auzi iarba cum crește (To hear the grass growing), Constantin Noica, a Romanian philosopher who had also been a political prisoner under communism before going on to become an important link in the informal transmission of the cultural values of the interwar generation, wrote to the author: “It is crazy book and a true one, just as your life has been. Your book has neither head nor tale, but it has a core” (Ornea 1999). It is worth mentioning that Harry Brauner was the inspiration for one of the characters in Marin Preda’s novel Cel mai iubit dintre pământeni (The most beloved of all mortals), which offers a social fresco of communist Romania under its first dictator, Gheorghe Gheorghiu Dej, and which became famous because it was withdrawn from bookshops just a few weeks after its publication in 1980, but continued to circulate clandestinely. Preda presents the character as follows: “A Jew with a passion for Romanian folklore, a refined man of culture, who strove almost daily to convince us of what treasures lay in our folk songs. He knew laments of a beauty that sent shivers up your spine, tragic songs of parting, of longing, wedding songs, some sublime, others brutal and grotesque, the like of which no one had ever heard” (Preda 1980).