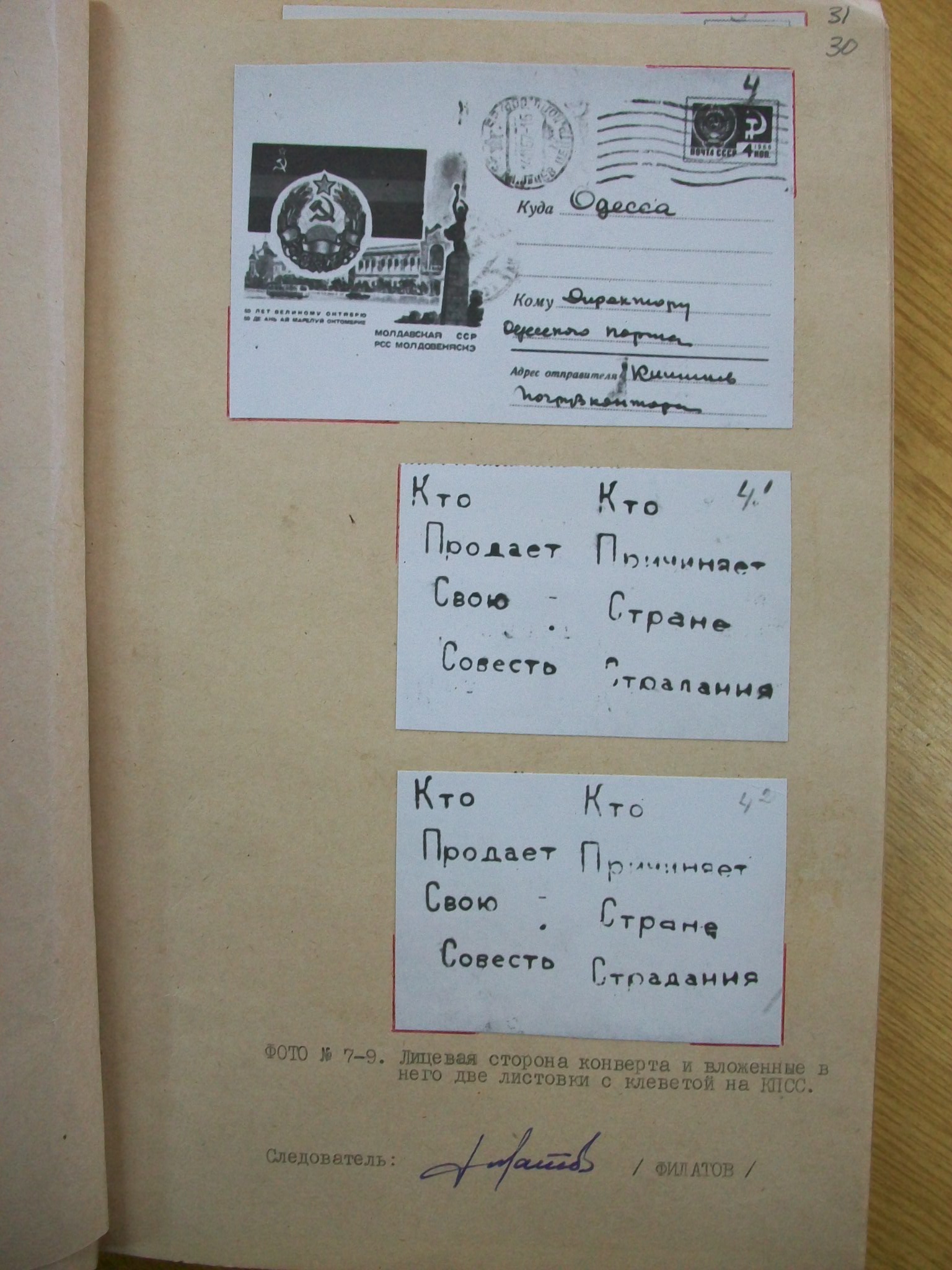 Pavel Doronin started his “anti-Soviet” activities in November 1967, when, on the occasion of the fiftieth anniversary of the October Revolution, he produced a short leaflet with a message criticizing the regime and considered “subversive” by the Soviet authorities. The content of this text – Кто Продаёт Свою Совесть / Кто Причиняет Стране Страдания (Who Sells One’s Consciousness / Who Causes Suffering to the Country) – represented an acrostic with the first four letters of each line forming the initials of the Soviet Communist Party – КПСС / CPSU). Thereafter, Doronin constructed seven typeset-stamps in his apartment (each one coinciding with a word of the acrostic), which he then used to print twenty-four leaflets.  Doronin spread the leaflets by, on the one hand, distributing six copies throughout Chișinău and, on the other hand, by sending the rest of the leaflets by post to various Soviet institutions, factories, and religious organizations. Another form of expressing his discontent was the drafting of caricatures and letters that he sent to various Soviet newspapers. Thus, in May 1970 Doronin creatively altered an anti-American caricature published in the Soviet journal Krasnaia zvezda (Red Star), the official organ of the Soviet Ministry of Defence, by inserting Breznhev’s portrait instead of the original image of the American president and by writing the initials of Czechoslovakia, Egypt and Vietnam against the background of heavy weapons, initially intended to refer to US war-mongering. Although during the preliminary inquiry the defendant insisted that he only intended to show the discrepancy between the official Soviet rhetoric of peace and the reality of Soviet military involvement abroad, the interpretation that the KGB investigators favoured emphasized the more serious accusation that Doronin in fact viewed the whole foreign policy of the USSR as more aggressive than that of the US. Finally, in a series of letters that he sent to the Soviet central newspapers Pravda and Izvestiia in October 1970, Doronin criticized various sensitive aspects of Soviet official policies and everyday life. Besides several short texts focusing on the ”Jewish question,” he also reacted to the debate around Alexander Solzhenitsyn’s nomination to the Nobel Prize for Literature. Reacting to the writer’s condemnation by the official Soviet press, Doronin wrote: “The journalists of a newspaper that is called Pravda (Truth) should be ashamed of spreading all sorts of baseless calumnies and of mocking a man who deserves only recognition, honour and respect from the Soviet people and all other peoples! And this is happening in a country where everyone is boastfully talking about Man as the main value? After all this, how can one believe in a Socialist future?” In another note he sent to Pravda, referring to a trial of a black marketer (spekuliant), Doronin harshly criticized the corruption and inequality within Soviet society, claiming that some party members were becoming a privileged class of “exploiters” instead of providing worthy examples of honesty and hard work. Despite the occasional, isolated and sporadic character of Doronin’s acts of defiance, this case is a fascinating example of how personal, social and political grievances could combine to stimulate an individual’s critical acumen beyond the limits usually tolerated by the regime. Doronin certainly did not fit the typical image of an anti-Soviet dissident or oppositional figure. However, the authorities took his “ideological deviation” seriously enough to spend considerable efforts in order to investigate his case and to condemn him for his “dangerous” views, despite his “sincere repentance” during the trial.