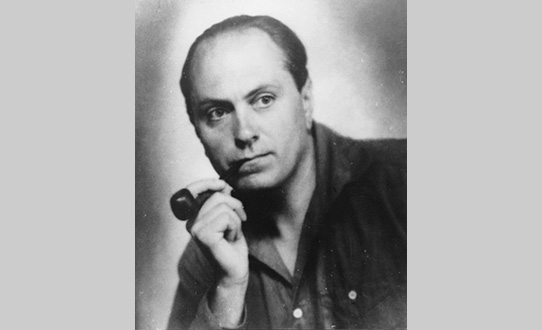 Hans Mattis-Teutsch (also known as János Mattis-Teutsch; born 13 August 1884 in Braşov/Brassó, then part of Austria-Hungary – died 17 March 1960 in Braşov) was a painter, illustrator, sculptor, and art theoretician of German and Hungarian origin, who was involved in different avant-garde movements throughout Europe in the first half of the 20th century. Because he became known initially as part of the Hungarian and German avant-garde, and after 1918 the Romanian avant-garde, Mattis-Teutsch has been claimed by Hungarian, German and Romanian artistic milieus alike. However, his work transcends ethnic boundaries. He was part of various artistic movements and trends in Hungary, Romania, Germany, and France, being the embodiment of the transnational nature of the European avant-garde.

Hans Mattis-Teutsch was born into an ethnically mixed family. His father – János Máttis – was Hungarian, his mother – Josephina (born Schneider) – was Transylvanian Saxon. After his father’s untimely death, his mother married Friedrich-Karl Teutsch, who legally adopted the future painter, and made him his heir. This explains the compound name, Mattis-Teutsch, which he took later. Hans Mattis-Teutsch trained as an artist in Braşov, where he was a student of the wood-carving section of the industrial technical school until 1901. Subsequently, he studied for a year at the Hungarian Royal Institute of Arts and Crafts in Budapest. Between 1902 and 1905, he attended the classes of the Royal BavarianAcademy of Fine Arts in Munich (Die Königlich Bayerische Akademie der bildenden Künste). From Munich Mattis-Teutsch went to Paris, where he remained until 1908. Here he experienced the effervescence of the modernist movements that spread in the French capital at the beginning of the twentieth century. In 1909, Mattis-Teutsch settled in Brașov, where he became a teacher at a technical school. He continued to travel and to collaborate with various avant-garde groups in Europe.

After the time spent in Paris, he focused on German and Hungarian art. In Germany he collaborated with the art groups Die Brücke and later with Der Sturm, adopting expressionism (Mesea 2009, 13). During the First World War he worked with the Hungarian avant-garde group involved in publishing the magazine Ma, a collaboration which consolidated the artist’s friendship with writer Lajos Kassák, the group’s leader. The group around the magazine Ma organised a personal exhibition for him in Budapest in 1917 (Almási 2001, 20).

After 1918, Mattis-Teutsch was actively involved in a series of European avant-garde movements, as well as in the local artistic life of Brașov. He became closer to the artistic movement Der Sturm. This experience emphasised his “tendency towards abstractisation” (Mesea 2009, 23–24). At the beginning of the 1920s, Mattis-Teutsch frequently exhibited at the Der Sturm Gallery in Berlin. At the same time, he became part of the Romanian avant-garde groups that coalesced around the magazines Contimporanul and Integral, alongside the artists Marcel Iancu and M. H. Maxy (Vida and Vida 2001, 87). This collaboration culminated with an exhibition organised in Bucharest in 1924 by the group of artists at the Contimporanul magazine, where Mattis-Teutsch exhibited his works next to Paul Klee, Constantin Brâncuși, Hans Arp, Arthur Segal and Lajos Kassák (Mesea 2009, 11). Mattis-Teutsch’s involvement in the Romanian avant-garde overlapped with his evolution towards constructivism. The constructivist stage also led to Mattis-Teutsch’s increased interest in art theory, which resulted in the publication in Germany in 1931 of Kunstideologie. Stabilität und Aktivität im Kunstwerk, a work in which the artist presents his own vision of art and its relationship to society (Mattis-Teutsch 1931). This perspective is marked by his adherence to Marxism. In the 1920s in Germany, Mattis-Teutsch was linked to artistic movements which promoted socialism, such as A bis Z or Novembergruppe in Berlin (Almási 2001, 37).

In the 1920s he was internationally acclaimed, and his exhibitions were well received by the public in Rome, Chicago, Berlin, Vienna, Paris, and Bucharest (Almási 2001, 29). At the European level, his series of paintings Compositions and Seelenblumen/Soulflowers were highly regarded. This international fame crowned his prodigious artistic activity which included painting, sculpture, and drawing using various techniques.

As for the local artistic life in Braşov, it was difficult for Mattis-Teutsch to fully integrate into the group of Transylvanian Saxon intellectuals dominated by conservative values (Ittu 2009, 31). An important role in his local promotion was played by the cultural magazine Das Ziel, published in German, which organised several exhibitions in Braşov at the beginning of the 1920s and which published many reproductions of his graphic works (Vida and Vida 2001, 83–85). The rise of Nazism among the Transylvanian Saxons and of the Romanian far right movements in general at the end of the 1930s determined Mattis-Teutsch to retire from public life and from exhibiting (Popica 2009, 9). His closeness to Marxist groups and his view of art which did not correspond with that promoted by the authorities led to his marginalisation at the end of the 1930s and during the Second World War.

In the first years after the war (1944–1947), there was a revival of avant-garde art in Romania (Vasile 2010, 131–132). Many avant-garde artists, including Mattis-Teutsch, had leftist convictions and were hoping for a democratic evolution towards a more equitable society. Mattis-Teutsch returned to public life, and in October 1944 he founded a union for visual artists called the Free and Democratic Organisation of Braşov Artists. In the following year, he also created an artistic centre called the Free Braşov Academy. This period ended in October 1947, at the congress of the Association of the Unions of Artists, Writers, and Journalists when the official policy on the arts was defined: the arts were to become “ideological weapons” (Cârneci 2013, 20–21). The main instrument used by the communist authorities to control artists’ activity was the Association of Visual Artists (Uniunea Artiștilor Plastici – UAP), which replaced many autonomous unions and associations. The UAP controlled “the entire network of orders and acquisitions made by the state,” and administered “all the artists’ funds and production means” (Cârneci 2013, 22). The union created by Mattis-Teutsch was integrated in the new structure, and the space where his painting academy had functioned was nationalised (Almási 2001, 87).

Although Mattis-Teutsch initially tried to participate in the cultural policies of the new regime, in the hope of fulfilling his leftist ideals, he refused to give up his creative freedom and to comply with the artistic model promoted by the authorities: socialist realism. This is why, starting from 1948, he was criticised by the cultural press, and his painting was considered “decadent” and “bourgeois” (Popica 2015, 3). As a result, Mattis-Teutsch lost his position as head of the Union of Visual Artists in Braşov and was marginalised from artistic life. De-Stalinisation brought about a partial change in the attitude of the communist authorities towards the artist. Their attempt to recover the most famous local painter is illustrated by his appointment in 1957 as head of the local branch of the UAP. However, this appointment did not lead to the concessions the regime expected from the artist, who preserved the specific elements of his style. His works continued to be harshly criticised; for example, Mattis-Teutsch’s exhibition organised in Bucharest in March 1957 was badly received by the official press (Macovescu 1985, 5–6). His marginalisation is also illustrated by the fact that the Braşov Regional Museum, which later became the county museum, did not include any of his works in its permanent collection during the communist period, despite his international prestige (Interview with Radu Popica). Concrete steps towards “recovering and integrating” his work in the “circuit of Romanian art” were taken at the end of the 1960s and the beginning of the 1970s, in the context of the liberalisation of the cultural policies of the Romanian communist regime (Popica 2009, 9). However, as with other members of the avant-garde, the full recovery of his work at national level took place after 1989, through exhibitions and specialised publications.