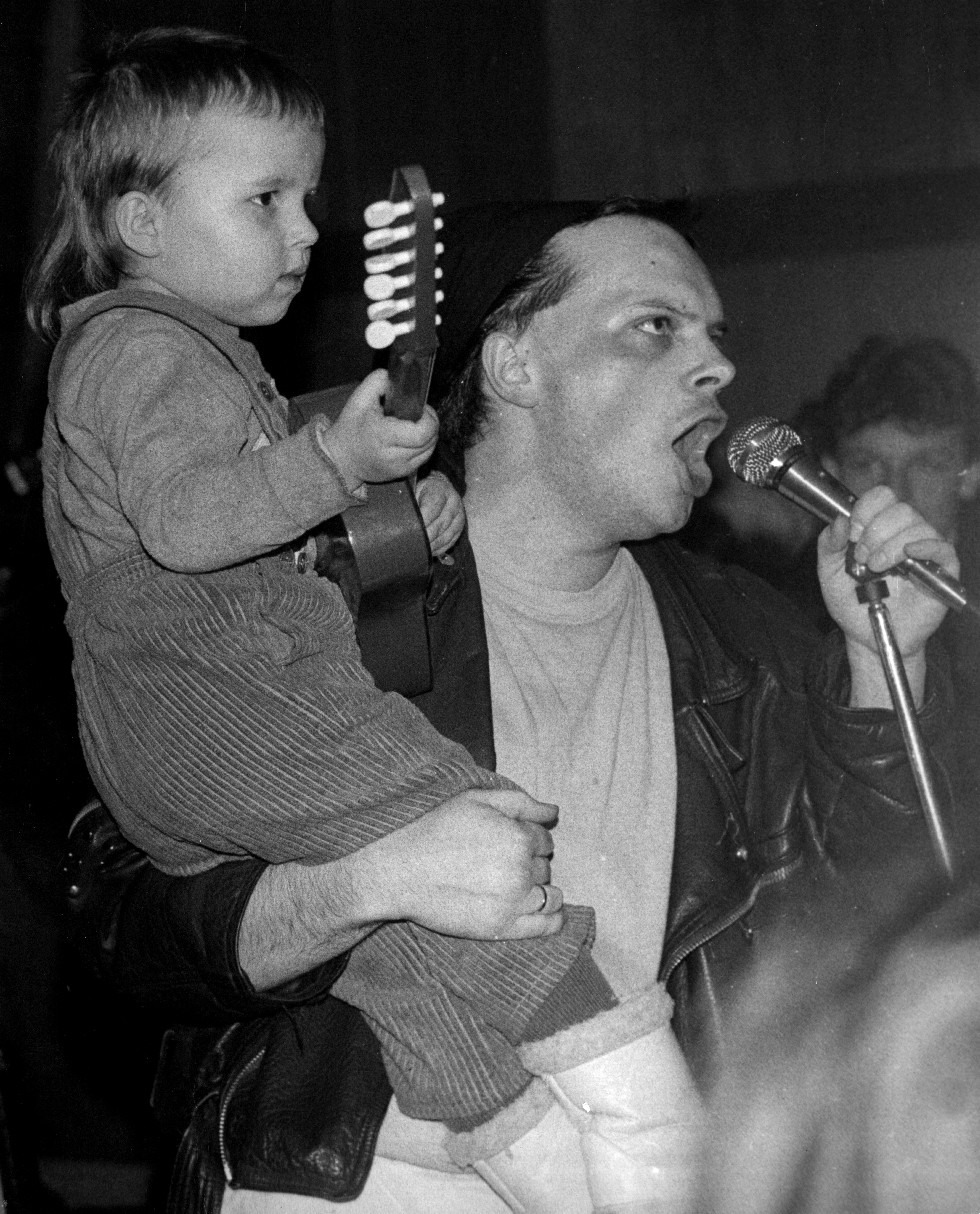 Krzysztof Skiba (1964) was born in Gdańsk as a son of a high in ranks sailor and an architect. In 1983 he co-founded the Alternative Society Movement – the first anarchist organization in Poland after the World War II. In the same year, he finished high school education in Gdańsk and moved to Łódź, where he became a student of cultural studies at Łódź University and joined the team of student theatre Pstrąg. Next years he spent traveling between Gdańsk where he had still participated in anarchist activities and Łódź where he acquired knowledge about avant-garde art, alternative theatres, and culture theories. In 1985 he got arrested and consequently imprisoned for three months for spreading the anarchist leaflets on a rock festival in Jarocin. After that Skiba could no longer take part in secret, anonymous operations of anarchists, so he entered the anti-militarist and mostly pacifist Freedom and Peace movement, proclaimed in 1986 as an illegal and unofficial, but open and public opposition. He became also a student culture animator in student club Balbina, where he organized rock concerts, neo-avant-garde exhibitions, poetry performances, and theatre plays. For example, in 1988 he was a curator of an international art mail show in Balbina. Together with his colleagues from cultural studies, as well as Independent Students’ Union in Łódź, in 1988 Skiba established two groups: punk cabaret Big Cyc and the Gallery of Maniacal Activities specializing in street happenings and inspired by Wrocław’s Orange Alternative movement. Till the year 1990, when Gallery of Maniacal Activities came to an end, the radical group performed a few outrageous happenings, harshly critical about both the government and the opposition’s elites gathered around the Round Table. In 1989-1990 Skiba turned into a popular musician, showman, and satirist, while his younger colleagues from the Gallery of Maniacal Activities formed performance group Wspólnota Leeeżeć. Nowadays Skiba still performs on a stage with Big Cyc, as well as writes opinion pieces, small stories, and memoirs.

As an anarchist Krzysztof Skiba did not think too much about collecting items related to the underground and oppositional activities. He insisted in the interview that the anarchists had been focused on direct action, here and now, with negligence of any documentation and archiving. In fact it was unsafe to collect such materials in one’s home or in a student house, as in Skiba’s case. Moreover, after Skiba had been exposed as a dissent activist, he was under the systematic control of the secret police. But when he became a student culture animator in club Balbina, he created there a quiet place for alternative culture projects, even unofficial and illegal ones (like street happenings). Skiba participated in mail art exchange and the third circuit, and his address in the student house was well-known among other artists, activists, animators, promoters. Consequently, Skiba became an owner of a huge archive of art zines, fanzines, papers, leaflets, letters, and other items sent to or shared with him.

After the transition to capitalism Skiba did not care much about his archive, keeping it in cardboard boxes in his house in Gdańsk. Although in the recent years Skiba donated one part of the collection to the European Solidarity Centre and the other part to the KARTA Centre Foundation, he has got still about one thousand items.

Krzysztof Skiba was far from participating in strikes organized by ‘Solidarity’ union or in patriotic masses in churches. Indeed, happenings carried on by Gallery of Maniacal Activities were strongly sarcastic about the union’s leaders who sat together with the government around the Round Table. But in spite of this criticism, ‘Solidarity’ printers released Skiba’s zine ‘Przegięcie Pały’ and a few times the union paid the fees for arrested participants of the happenings.