Court file from the lawsuit for diffamation in 'The Anatomy Lesson' 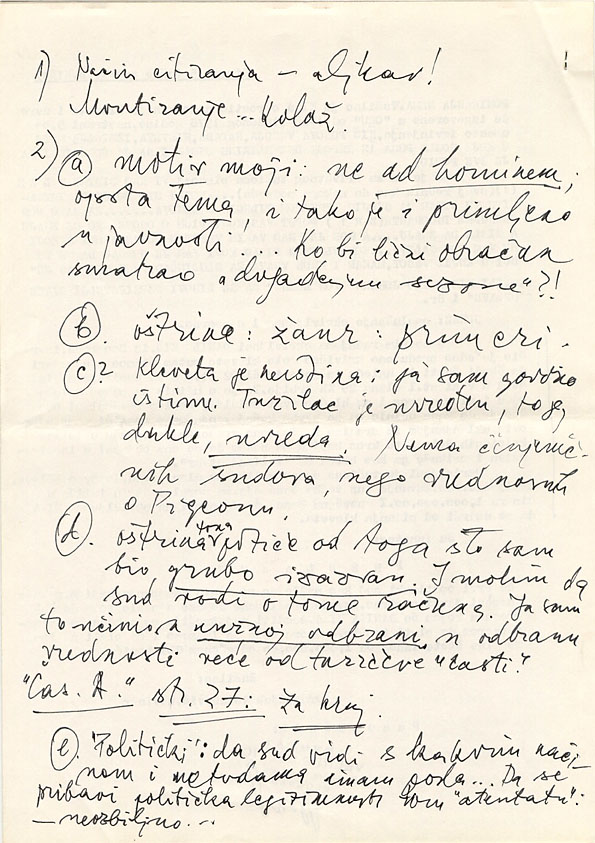 In 1978, Danilo Kiš published the book Čas anatomije [The Anatomy Lesson], a response to criticism and attacks on his previous book Grobnica za Borisa Davidoviča [A Tomb for Boris Davidovich]. The release of Čas anatomije led to Kiš’s prosecution in court which is well documented in the collection. Folder no. 6 (147-150) contains court files from 1978 (charge, defence and appeal).

The lawsuit against Kiš was filed by Dragoljub Golubović. Golubović was a journalist and one of the biggest critics of Kiš’s book A Tomb for Boris Davidovich. In various newspapers, he had published a series of articles in which he accused Kiš of plagiarism. After Kiš's response to the allegations in the form of a collection of essays named The Anatomy Lesson, Golubović filed a lawsuit in which he accused Kiš of libel. The lawsuit quoted excerpts from the book as proof.

The court documentation in the collection shows that Kiš defended himself by explaining that his book was created as a gesture of a "legitimate and necessary defense, as a value greater than the prosecutor's honor: [a gesture] of my literary existence and my literary approach, as well as generally, as a fundamental defense against fatal and destructive judgements of a layman". In court, Kiš took the view that he was a writer and had the right to defend himself, using literature, against unfounded attacks on his work.

In a written statement delivered to the court, Kiš wrote: "The particular polemic sharpness of my book was, in addition, dictated not only by rough challenge and polemic fervour, but also by the literary genre itself: traditionally, polemic uses irony, sarcasm, ridicule, because it is a form of literary struggle." Kiš claimed further that polemics is a category of literature which an author can legitimately use and cannot be subject to claims of defamation. He listed a series of polemic writers and literature to try to defend his right to artistic expression. He also advocated for the view that literary controversy is actually a kind of public debate and is subject only to public judgment and literary history, not to be interfered with by the court.

In the end, the court accepted Kiš’s view, and acquitted him of the three counts of defamation. The court ruled that Kiš's response to Golubović in The Anatomy Lesson represents a "personal and subjective view to the prosecutor's conduct, and that this does not amount to facts serving to prove the truth, and thus it cannot be accepted as a charge for defamation.” The court also called for observing the broader context in which the book was created, which was in Kiš’s favour. However in 1979, after the lawsuit, Kiš left Yugoslavia embarrassed and disappointed.