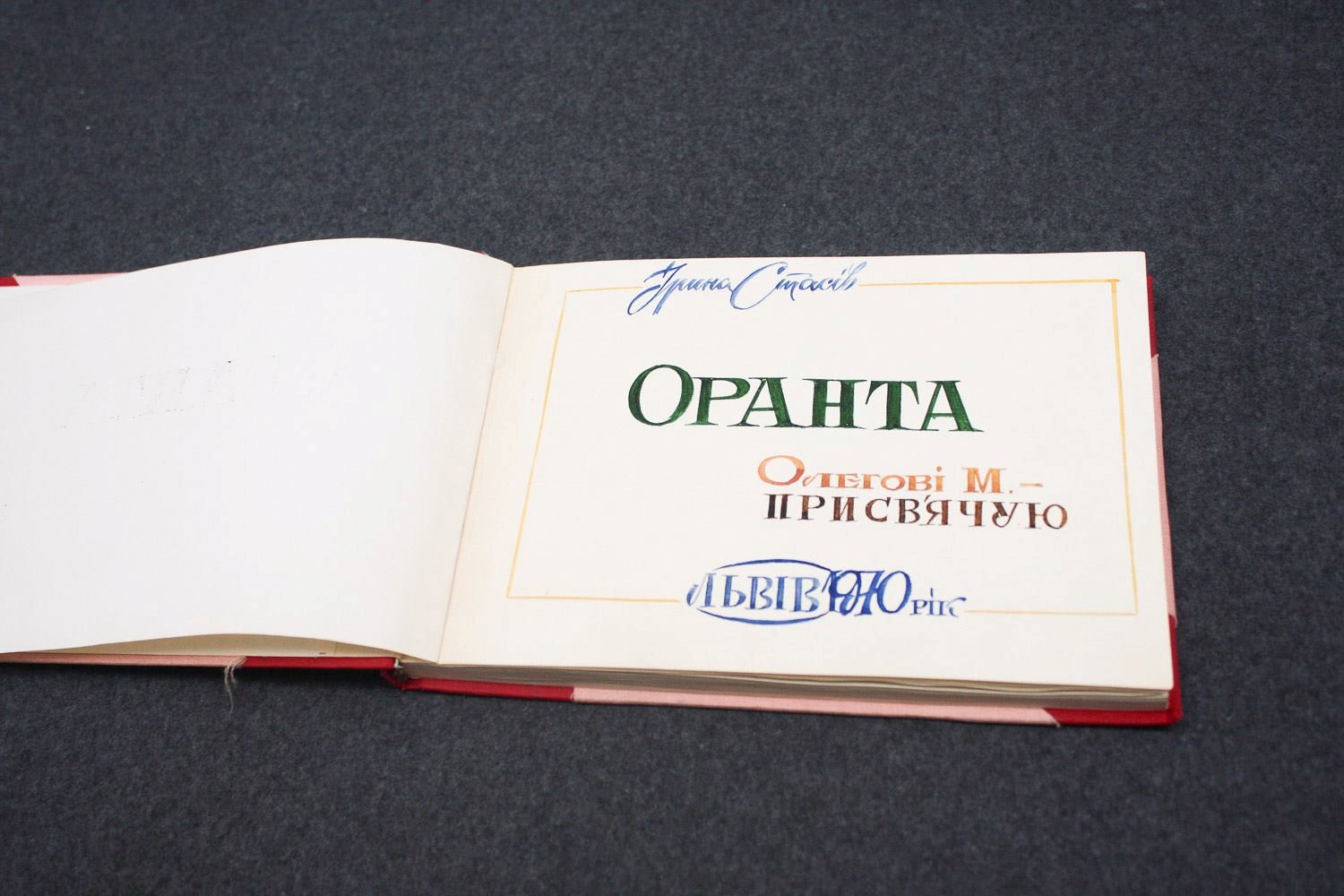 Iryna Kalynets’ volume Oranta is another featured item of the Prison on Lonskogo St. It was published in Lviv in 1970 and dedicated to her friend Oleg Mink, an artist from Makeevka, in the Donetsk region. Clearly made by hand, the illustrations were done by the artist Roman Petruk, who used watercolour, gouache and other techniques.

This book was confiscated in a search of Kalynets’ apartment following her arrest in 1972. The KGB file on her case indicates that two publishers refused to print this collected volume of poetry, partly due to the “questionable behaviour” of the author and partly because of the fact that Stasiv-Kalynets “did not once mention successes of socialism, the values of collectivism, or praise the wisdom of the Soviet leadership.” The volume along with several others penned by Stasiv-Kalynets underwent linguistic and stylistic analyses by Soviet forensic experts working for the courts, who concluded her body of work “painted socialist realities as undesirable, while also guiding the reader instead toward mysticism.” Quite a few poems were designated as clearly nationalistic, expressing disdain for Soviet rule, “profaning ‘foreigners,’ while also awaiting the moment when they would be struck by 'thunderous revenge.’” As Iryna Yezerska notes in her piece about the book Oranta, it drew on biblical themes of suffering and resurrection, calling for a beleaguered Ukraine to rise from slumber. The KGB concluded, these messages “were particularly toxic for young people, whose worldview had not sufficiently matured.”

The courts handed down a severe sentence of 6 years hard labour and another three in exile, despite the many letters written by family and friends on her behalf, who questioned the wisdom of meting out such punishment for poetry. Her husband Ihor was arrested several months later. The courts found particularly problematic the publication of a volume of his poetry abroad, which he had dedicated to Valentyn Moroz, a historian who had been arrested in 1970, as well as his contacts with ““unreasonable” people and foreigners.” He received the same sentence as his wife Iryna, which left their daughter Dzvinka without her parents for 9 years.