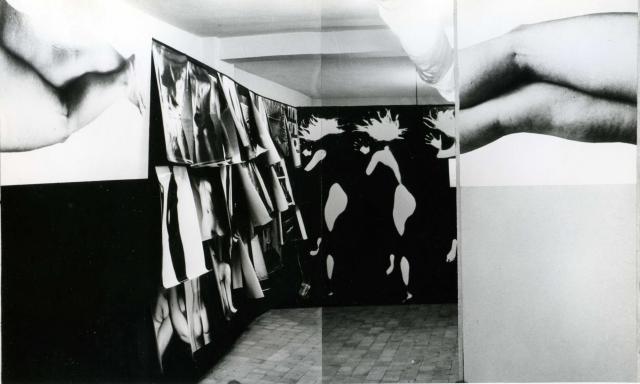 The "Iconospheres" series of photographs is divided into three parts which present details of a female body and the artist`s nearest surroundings. In the first two installations, Dłubak intentionally uses the interior of a gallery. For the third installation he gave up arranging the photographic environment, showing the woman`s back against a flat wall. Dłubak arranged pairs of identical prints into vertical strips, which gave the impression of a mirror reflection. The viewer of this exhibition "Iconosphere II" (shown in Cracow in 1968) was forced to engage in physical contact with the photographic print - the setting of the exhibition created the situation in which he/she had to touch the blow-ups of the female body with his/her own silhouette.

The artist presented a fragment of "Iconosphere III" (one vertical strip) during his monographic exhibition in the Warsaw-based Klub Międzynarodowej Prasy i Książki in 1970. The full version of the work was shown a year later.
Just like the other photographic series by Dłubak, "Iconoshpere" undermined the prevailing idea of photography as a pure representation of reality. Contrary to the official currents of journalist, realist and mimetic photography in socialist Poland, Dłubak's work appraised the novel forms of reflection as present in the Western philosophical and art thought, namely, the symbolism, structutralism, and constructivism. Dłubak incited his viewers to rethink and deconstruct the meaning of the female body, not as an object of sexual desire, but as an element of ambigous reality where the body, the space and the light mingle in one photograph. This view of photography confronted the official narrative of photographic agencies and newspapers' editors in socialist Poland.